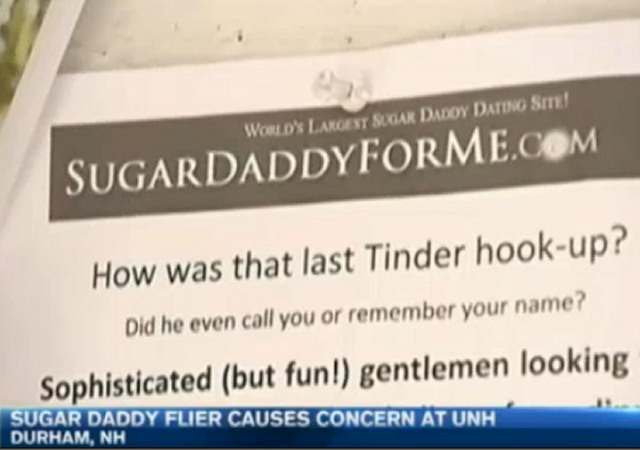 The service claims it seeks to pair female students with ‘Sugar Daddies’ for dinner dates but we know what that really means, don’t we?

A New Hampshire business owner is sounding the alarm after he found a flier near the University of New Hampshire campus in Durham connecting young, vulnerable students with “sugar daddies.”

The piece of paper was pinned to a bulletin board outside the Town and Campus store. The owner ripped it down right away, but the “sugar daddy” ad is popping up elsewhere, so police are asking people who see the fliers to take them down.

For 56 years, Town and Campus has not only sold students their UNH gear, but it has also been a safe haven for kids far away from home.

“We treat them in here as family,” longtime Town and Campus employee Rich Many said.

So when Many saw the “sugardaddyforme.com” ad on his bulletin board, he ripped it down and notified authorities.

“This was a way to take action to protect them from anything harmful,” Many said in an interview Tuesday.

The ad connects financially unstable co-eds with “sugar daddies” who will, according to the advertisement, pay students cash for being a “dinner companion.”