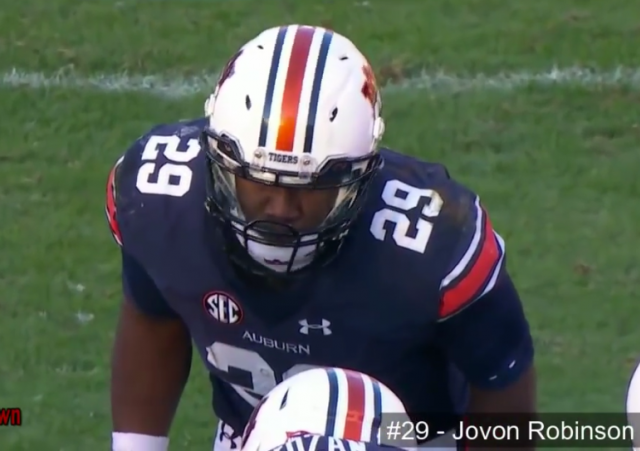 With universities under extreme pressure from the Obama education department, social justice warriors, and radical feminists, all it takes is an accusation of sexual impropriety to destroy the accused.

We have documented in dozens of posts the kangaroo court system on campuses in which men are railroaded with few due process protections.

But sometimes it doesn’t even get to the kangaroo court, the accusation is enough, as Reason demonstrates, Female Student Admits to Incredible Lie That Got Auburn Football Player Kicked Off Team:

Auburn University dismissed running back Jovon Robinson—formerly the No. 1 junior college player in the country—after a female student accused him of assaulting her.

“He did not meet my expectations of what it takes to be an Auburn Tiger football player,” said head coach Gus Malzahn, according to al.com.

But Robinson never assaulted anyone. His purported victim made it up entirely. The woman now readily admits to fabricating the allegation out of spite—she was angry at Robinson for making her leave his room.

It’s an astonishing, malicious lie that might have factored into Auburn’s decision to release Robinson, though the university maintains that it had other issues with him. It’s also a powerful repudiation of the leftist-feminist idea that victims of assault and sexual assault deserve to be automatically believed….

According to al.com—which obtained an exclusive interview with the woman—the pair had an argument very early in the morning on July 15. Robinson wanted her to leave, and eventually escorted her out of his room. He didn’t hurt her at all.

The potential future earnings calculation is pretty easy. This should result in a nice settlement. I hope he does not get too boned by his lawyer…..sue all professionally and personally. Make it hurt for a long time.

Not so easy. Read the article again. “It’s an astonishing, malicious lie that might have factored into Auburn’s decision to release Robinson, though the university maintains that it had other issues with him.” So first he’d have to prove that this accusation played any role in the decision to release him. Second, he’d have to prove how great a role it played. Third, even if he can establish that the decision was entirely due to the accusation, I don’t see how he has any case against the college. It had no duty not to release him. It could have done so at any time, for any reason or no reason. So the fact (if it is a fact) that it did so because it believed a false accusation is neither here nor there. His only case would be against his slanderer, and she’s unlikely to be able to pay him very much.

It’s also a powerful repudiation of the leftist-feminist idea that victims of assault and sexual assault deserve to be automatically believed….

Unless the assailant is named Clinton.