Hijab is mandatory in Iran. 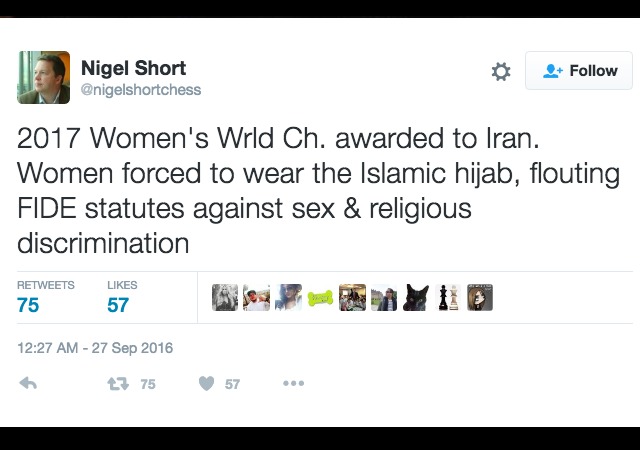 The World Chess Federation (FIDE) Commission for Women’s Chess has told the female chess players they must wear a hijab at the world championships next year since it takes place in Iran.

Females in Iran must wear a hijab.

Needless to say, the female players have protested and threatened to boycott the event:

Nazi Paikidze, the US women’s champion, also raised concerned about players’ safety in the Islamic republic.

She said: “It is absolutely unacceptable to host one of the most important women’s tournaments in a venue where, to this day, women are forced to cover up with a hijab.

“I understand and respect cultural differences. But, failing to comply can lead to imprisonment and women’s rights are being severely restricted in general.

“It does not feel safe for women from around the world to play here.” Paikidze added: “I am honoured and proud to have qualified to represent the United States in the Women’s World Championship. But, if the situation remains unchanged, I will most certainly not participate in this event.”

It's very upsetting that I have to miss my first Women's World Championship. For many reasons. pic.twitter.com/eGS64dK1Y5