FDA is now going to save us from our hand soaps

FDA is now going to save us from our hand soaps 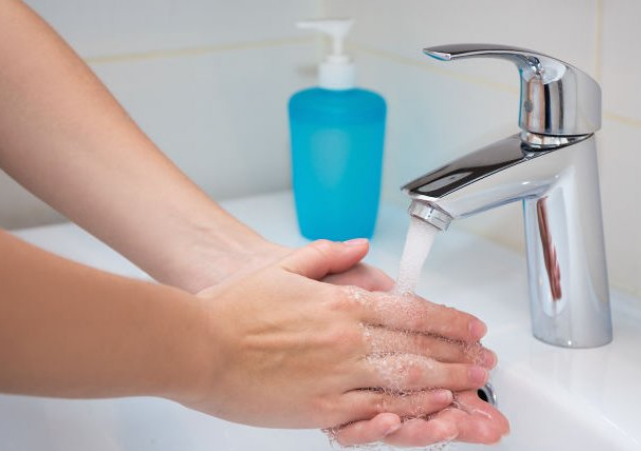 About a week ago, I noted that new Food and Drug Administration regulations were snuffing out e-cigarette firms.

Now the FDA is going to save us from our hand soaps:

The Food and Drug Administration has issued a final rule that throws water on claims that antibacterial soaps and washes are more effective than regular soap.

The new rule bans antibacterial soaps and body washes containing certain ingredients from being marketed, because the ingredients were not proved to be safe and effective for long-term daily use, the FDA said Friday.

The rule applies to antibacterial soaps and washes that contain one or more of 19 active ingredients, including the most commonly used chemicals triclosan and triclocarban, but it does not affect consumer hand sanitizers or antibacterial wipes.

As this NewUpdate video explains, the FDA is giving the soap manufacturer’s one year to reformulate their products or pull them from the market entirely:

Anti-chemical activists have been targeting triclosan for years as a “potentially dangerous chemical” for years, including hitting the FDA with a lawsuit for delays in promulgating regulations and complaining that is was detected in surface waters.

However, long-term studies on triclosan failed to indicate the substance was actually harmful. What a review of the data did show was that it was ineffective and could lead to the development of antibiotic-resistant bacterial strains.

There is also significant evidence that triclosan might worsen the problem of antibiotic resistance. Whereas plain soap and water simply dislodge bacteria from skin, triclosan weakens and kills the microorganisms. Until recently it was thought that triclosan acted indiscriminately—killing all bacteria in a number of ways—but now scientists know that it targets specific molecular pathways, acting more like an antibiotic.

For example, triclosan homes in on an enzyme that plays a key role in bacterial metabolism—the same pathway that the tuberculosis-fighting antibiotic isoniazid targets. This similarity has raised concerns that bacteria could mutate and grow resistant to triclosan—and therefore also to the antibiotic.

The good news for American business is that makers of consumer products have a variety of formulation options that they are beginning to implement.

…Johnson and Johnson pledged to remove triclosan from its consumer products by 2015 and currently list it as one of the ingredients they don’t use. Unilever has also pledged to phase the chemical out and will stop using it completely by 2017. Colgate-Palmolive settled a lawsuit for $2 million in 2015 to end lawsuits in several districts that alleged the company had misled consumers into believing Softsoap antibacterial hand soap containing triclosan killed most common germs, according to reporting by Law360.

Despite the required reformulations, hand-washing remains a key protective step to avoid illness.

So self-regulating businesses which had already decided to remove an ingredient and have done so are now faced with an FDA requirement to remove that ingredient or else.

The speed which the FDA moves on an important health issue boggles the mind.

You and I have plenty of time to stock up on the ter’bel, ‘orrible soaps and detergents.

I plan to begin this week by buying TWO of each product I’d normally purchase once or twice a blue moon.

Putting triclosan in just about everything (notably sandals, in which it produces a burning reaction in my feet) is almost as stupid as mass-feeding antibiotics to cattle.

Have you ever raised animals? An infection can wipe our your whole herd/flock before you know it.

Mass feeding of antibiotics to livestock results in animals being about 5% bigger. That’s one of the main pros.

The main con is that livestock becomes a breeding ground for antibiotic-resistant diseases.

Leslie, you have been living in California too long.

Unless you are working in a highly sterile environment, three seconds after washing your hands you will have bacteria all over them. You can’t avoid it. You wash your hands to get the crap off of them ( if you have just defecated then that is literally the case ). It’s better to just get a good hand/nail brush and use it to thoroughly scrub your hands with plain soap ( eg ivory ).

“Leslie, you have been living in California too long.”

This native Californian is happy to be in Texas.

So is my beautiful native Californian wife.

huh guess I’ve been doing it wrong.
I douse with kerosene then light a match to kill bacteria on my hands.

I hate to burst the bubble of outrage, but let me give you a little lesson in Microbiology. The human body has just about 67 TRILLION cells. For each and every one of those, there are about 14 or so bacteria. They are SUPPOSED to be there. Those bacteria, which we call “normal flora”, protect you from other more harmful bacteria. When your normal flora goes awry then you get sick.

All bacteria are susceptible to antibiotics, though some more so than others. When you use an antibiotic soap you kill off most of the normal flora on the surface that you wash. Those left behind tend to be more resistant to that particular class of antibiotics. Notice that word “class”. Nearly all antibiotics belong to some group or other that we call a class. Resistance to one can manifest as resistance to others in that same class. And like an allergy, repeat exposure simply builds up resistance.

There are two main causes for the development of antibiotic resistant bacteria, both of which boil down to overuse of the antibiotic. The first is prescribing antibiotics that aren’t appropriate for the illness or the bacteria &/or the subsequent failure of the patient to finish the entire prescription. (Unless you take all the meds, then you are leaving resistant bacteria behind.) As a result we now have antibiotic resistant TB, gonorrhea and syphilis – among others.

The second is the drastic overuse of antibiotics in the home – antibiotic wipes, antibiotic cleaners, antibiotic soaps. That’s like using a nuclear bomb to kill a gnat. You WANT some of those “germs.”

These two particular chemicals should never have been included in products for general consumption in the first place. Don’t climb all over the FDA for doing exactly what we pay them to do. This isn’t “over regulation” – it is regulation that is drastically required.

This is fascinating Granny. Years ago (ten or more), I had a student write a similar recommendation report in a professional writing course, and that was the first I’d heard of the way that bacteria becomes resistant. It makes perfect sense, though, and I remember being intrigued enough to read some of her sources. My question is: if a college junior knew this ten years ago, what took the FDA so long?

We knew about it decades ago. In fact, using antibiotic resistance genes has become the standard technique for pretty much any genetics work on bacteria. I’m still pretty young, but I remember learning in Jr. High (1998 or so) that these antibacterial additives were not only ineffective but also contributors to antibiotic resistant bacterial lines.

Fuzzy Slippers, I learned this in my first Microbiology class nearly 30 years ago and it was well known information even then. Soap is not food or a drug, so in general it escapes FDA scrutiny much as vitamins and supplements do.

Advertising agencies have been pushing the idea of “sterile” (nothing ever really is, at least not for more than a minute or two) as “cleanliness” to push all these antibiotic-containing cleaning and personal products on an unsuspecting public for decades now. It’s BIG business in a big way. I suspect this has gone on for so long because the FDA needed proof positive that these particular chemicals were harmful in order to step in on something that is not an item under their purview in the normal course of things.

Sadly, this attempt to maintain a super-clean environment can lead to long term health consequences over and above the development of what we now call “super bugs”. Children don’t develop good immune systems among other things. And oddly enough, studies trying to determine the cause of Multiple Sclerosis have shown the most widespread common denominator to be “raised in a super clean environment.”

I think they got this one right. I use the liquid soaps, and it is currently damnear impossible to find one that is not “Antibacterial.” Soap is antibacterial enough.