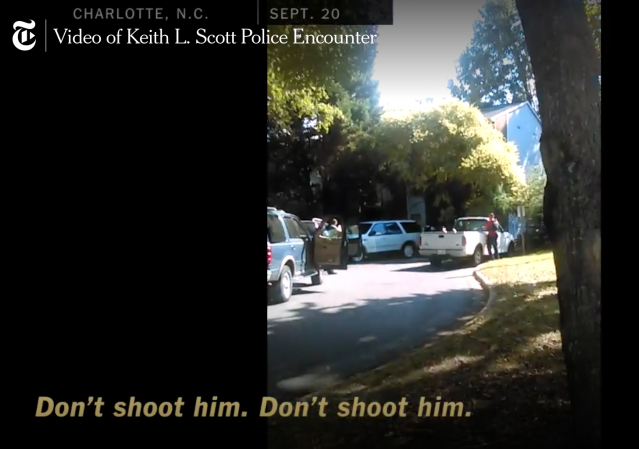 Keith Lamont Scott was shot and killed by Charlotte police last weekend. Violent riots broke out in response to the shooting. Rioters maintain Scott wasn’t armed, but was carrying a book.

With officials keeping their copy of the video footage under wraps, Scott’s family decided to release cell phone footage, recorded by Scott’s wife, that captured the police encounter. Scott’s family claims he was unarmed and suppering from Traumatic Brain Injury (TBI).

The family of Keith Lamont Scott has released cell phone video, recorded by his wife, that shows the moments leading to his fatal shooting by police Tuesday in Charlotte, North Carolina.

The video is the first publicly released footage related to the shooting, which spurred days of protests in Charlotte.

“Don’t shoot him. He has no weapon,” Rakeyia Scott can be heard saying. The first portions of the shaky video appear to show a number of police officers surround a vehicle in a parking lot.

A man repeatedly yells for someone — apparently Keith Scott — to “drop the gun.”

“He doesn’t have a gun. He has a TBI (traumatic brain injury),” Rakeyia Scott says. “He’s not going to do anything to you guys. He just took his medicine.”

The video shakes, and for a moment, a man in bright blue pants is seen near the surrounded vehicle. Gunshots are heard as Rakeyia Scott says again, “Don’t you do it.”

Police said an officer shot Scott on Tuesday after he failed to heed commands to drop a gun. His family has said he didn’t have a gun.

maybe “book” is ghetto for “Glock”?

Didn’t this guy already have several ‘book’ related charges in his past?

Well, he did have a magazine. Easy mistake.

Keep in mind, that protesters will think that the gun was planted.

Not necessarily. Most of them, even if convinced he had a gun, probably would say that was insufficient reason to shoot him. They just don’t care about reality. They care only for the agenda and its supporting narrative.

Oh, I totally agree. I do think this event was solely about the narrative and a large portion of these rioters wouldn’t care if he had a gun or not.

But before they say they don’t care if he was armed, they’ll say the gun was planted. Guilty until proven innocent ideas.

I’ve actually seen a lot of people say this already.

BTW look carefully at the 3rd picture above – the fellow in the red shirt. Just inside of his leg is the object that has been identified as the gun. It is by his boot.

They may CLAIM he had no gun, but I doubt even they believe that.

If he didn’t have a gun any ideas about why his wife was shouting “Don’t do it. Keith, get out the car. Keith! Keith, don’t you do it. Don’t you do it.”

OR was she yelling at the police?

She saw the gun when he got out of the car. I don’t think she knew it before that. First, she was just kind of a smart mouth attitude, claiming he had no gun and whatever else, “Keith, just get out of the car”, “Don’t you break the windows”, etc.. Then her voice changed to total fear and panic and that’s when I believe she saw that he indeed had a gun and kept pleading with him, “Keith, don’t do it, don’t do it! Don’t you do it!” I think Keith got out of the car and SHE saw the gun. Now she’s lying about it.

Maybe, suicide by cop.. He may have discussed this with his wife. Millions of dollars in payout to the family. No one will ever know, but in her terror, she may have been telling him not to go through with “it”.

Hillary needs NC to win the Presidency…….this is manufactured to try and anger blacks into voting for her, listen to her praise the protesters. I agree, someone maid millions off of this. notice how calm and unirritated the police chief is? Remember also that the dems held their Godless convention here in 2012. The chickennnnnnnnsssss have come home to rooooooosssssssst!

Why was she where she was and why was he just sitting in the truck?

No, she was lying the whole time, interfering with police, and endangering lives. She needs to be charged with murder.

“He just took his medication”. He was stoned out of his mind and she knew it.

Let’s talk about the TBI and the medication.

I read somewhere that Mr. Scott was disabled due to a brain injury from an auto accident “about a year ago.” Does that happen to coincide with his DUI conviction? (See: ‘In April 2015 in Gaston County(NC)Court, Scott was found guilty of driving while intoxicated.’ -Charlotte Observer

Anti-seizure meds will affect one’s coordination and judgment. He didn’t have to be “on PCP” or “stoned out of his mind” as some have theorized for him to be impaired.

Not only did this thug have a gun, but it’s come out that he had previously been convicted and sentenced to SEVEN YEARS in prison for shooting another black man in a robbery. Which by the way made it completely illegal for him to possess a gun – probably why the POS didn’t listen to police. He had an illegal gun and PCP in the car, he was guaranteed multiple years in prison.

Once again BLM riots over a worthless thug criminal.

We don’t know for sure that is the same guy.

We still don’t have all the facts, but I can assure you that if you’re standing on my front porch with a loaded gun that you refuse to put down, your chances of dying by lead poisoning are at one of the highest points in your life. Surrounded by police officers in a public place, I imagine the chances are similar.

The biggest thing to come out of this is that with her recording there was no way the cops could have planted his fingerprints on the gun.

Also I have to wonder how on medications for a TBI he could legally own a gun.

It wouldn’t surprise me if she was trying to trick the cops by telling them he didn’t have a gun. That has happened before. If he didn’t have a gun her admonition to him makes no sense, but it makes perfect sense if she knows he has a gun and that he’ll be shot if he displays it.

The question is why is she recording and staying that far away if she knew that her husband wasn’t armed?

Was she held back by the police or did she know that he did have a gun and he might be out of his mind after taking the pill.

It just bugs me that she made no attempt to get herself between the cops and her husband.

So the only conclusions are that she was either held back or she knew there was danger going forward. Of course I guess she could’ve blamed the danger on the cops with their guns out, but she made no attempt whatsoever.

I think cell phone recording mania overtook her, combined with the cops frightening her from getting in the middle.

Sometimes you have to put the phone away to be in the moment.

This video by the wife just reinforces that this situation is a turtle on a fence.

So is this the new “standard” for police involved shootings?
The family records the shooting and then every dam idiot on TV starts making comments about what is wrong or that the police did this or that. It just stunning at the level of stupidity over this.

Our law and order is at a breaking point today.

Our very way of life is under attack today. God help us if Crooked is elected!

Sure like to know what jagoff downvoted you. Prolly that crapweasel robespierre.

The more of these stories that the media push the more I become convinced that the goal is to destroy local police departments. By any sane standard, the police in almost all of these types of stories are exercising their right to self defense because the suspect is non-compliant and representing an imminent threat. I still do not understand why the media is actively participating in the destruction of police departments, but the inevitable effect of all these riots will be the extreme lowering of standards in applications for new officers. After all, who in their right mind would volunteer to work in the Ferguson, Baltimore, Milwaukee or Charlotte police departments if you will become a pariah for just doing your job.

The media is so lazy (or disingenuous, or both). Police body cam video is no longer “public record”. The law was changed last July and now body cam video can only be released by a Superior Court judge. http://abc11.com/politics/new-law-makes-police-cam-footage-off-limits-to-public/1422569/

Good catch, but actually the article says that the new law doesn’t take effect until Oct. 1, so technically it IS still public record.

It would be a great hook for a story about body cam footage, though. Maybe they’re holding that one for when it is released. Ah, who am I kidding, they haven’t a clue.

He is not a “shooting victim”.

A great country or what? So many in Charlotte get to see Obama at the African American museum on new 4K flat screen TVs.

Everyone should read the Powerline bio of the officer who made the split second decision to shoot Mr. Scott. Every police department in the country could use more men like Officer Vinson. http://www.powerlineblog.com/archives/2016/09/meet-the-black-charlotte-police-officer-who-shot-keith-lamont-scott.php?utm_source=facebook&utm_medium=sw&utm_campaign=sw

The most disturbing this about this video is how calm she is throughout. I mean come on they just shot your husband and no change in tone or timbre of voice, not sounds of agitation? I hope she isn’t in healthcare because she would have the bedside manner of Darth Vader.

Just like Diamond “Lavish” Reynolds livestreaming her BIG MOMENT while Philando Castile bled out. They were both totally self absorbed. Both were trying get ahead of the story to get THEIR narrative front and center, and both were trying to interfere with police business and frame the police for crimes. Mrs. Scott took it further by verbally threatening the police after the shooting.

LE video(s) will be released shortly… That may change things, then again, maybe not…