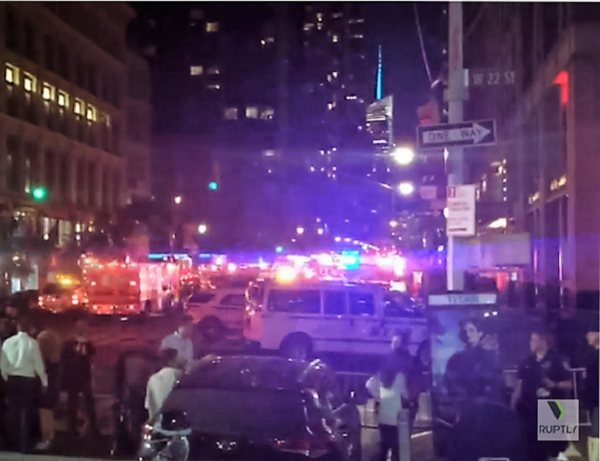 An explosion rocked New York City’s Chelsea neighborhood, injuring 29 people. Officials are not saying at this time whether the incident was terror-related.

Police are hunting for answers on what caused an explosion that injured 29 people in New York’s Chelsea neighborhood, shortly before a second suspicious device was found nearby.

New York City Mayor Bill de Blasio told reporters early indications are that the explosion at 23rd Street and 6th Avenue in Manhattan at about 8.30 p.m. Saturday “was an intentional act.”

But, he said, “there’s no specific and credible threat against New York City at this time from any terror organization.”

Investigators believe the blast was caused by an explosive device in or near a dumpster, a law enforcement source told CNN.

They are looking at surveillance video that appears to show a person near where the explosion occurred, in an attempt to determine if that individual is connected to the blast.

The second device found nearby  is reported to have been fashioned with a pressure cooker (the same type of device used in the Boston marathon bombing in 2013).  It was removed without incident by the NYPD Bomb Squad.

Authorities removed a second explosive device early Sunday — reportedly a pressure cooker — near the site of Saturday night’s blast that injured more than two dozen people in the Chelsea neighborhood.

. . . .  A device believed to be a pressure cooker was subsequently found on West 27th Street, four blocks from the initial blast on West 23rd, according to the New York Police Department. “The suspicious device on West 27 Street in Chelsea has been safely removed by the NYPD Bomb Squad,” the police department tweeted at 2:24 a.m. ET Sunday.

Following is a video posted by FM 95 radio and purported to show the explosion:

Meanwhile, the kiddies over at Reddit are all torqued off with CNN in particular for its refusal to cover these and other recent events.

And, they’re doing it right: first somebody posts the actual story with a headline critique, so the links to the underlying video or print story exist, and then others come up with what they refer to as “dank memes” –cartoons. So, their complaints are essentially backed up with screen shots, some of them, historical.

Their take on CNN’s coverage is that CNN first tried to spike the stories about multiple acts of violence last night, tried to blame Trump for mentioning one of them, covered Hillary blaming Trump for mentioning them, running with false alternative explanations very shortly overtaken by the police, and generally being very obviously politically protective of their favored candidate by trying to squelch the possible terrorism and multiplicity of the incidents.

It’s gleeful, its copious, it’s raucous, and Hillary is STILL losing her argument with a green cartoon frog.

“Tis a silly place, but they sure had a point, last night.

Early reports were that there were no fatalities. I hope that holds true into the future.

I also hope there were no limbs lost by any of the victims, or serious brain injury.

De Blase-O thinks it’s “intentional”, but not indicative of terrorism.

Or maybe it was an ad hoc urban renewal project?

You have to wonder if the July incident in Central Park, in which a young man had his foot blown off, was not a test run for this. http://www.dailymail.co.uk/news/article-3775403/Connor-Golden-foot-blown-homemade-explosive-Central-Park-walk-again.html

pro tip: if people are setting off bombs in your city, it’s terrorism.

Don’t forget, there was also some shenanigans over in New Jersey as well in the town of Seaside Park. They tried to bomb a charity race for Marines. Luckily no one was hurt in that one. Think I’ll echo Rags in that I hope no one was killed by the blast in NY and that no one lost any limbs or suffered serious trauma.

As well as this one:
https://legalinsurrection.com/2016/09/isis-claims-responsibility-for-minnesota-mall-knife-wielding-terrorist/

So…
The prerequisite for a terror attack is a specific and credible threat.
I realize he does not want to instill fear, but that is no reason to lie.
I suppose he wouldn’t approve of common sense either.

ISIS is laughing, and he does nothing but assure us there is no need for alarm.

This is no way to win a war.

( Maybe we should refer to it as the surrender to terror.. )

Considering Obama/Jarrett and Hillary Clinton have and still is seeding the nation with a refugee population or lunatic radicals, this is just the beginning – of the end.

I’ve commented the following on facebook and in other places:

I wonder. Would it be possible for cell phone companies to randomly during the day send out signals to every phone on their system to momentarily energize all their ports? Just enough to cause any attached detonators to detonate? Premature detonation should for the most part be a good thing.

Do we have any data on the prevalence of the use of cell phone detonators as opposed to say, timers? The suggestion seems like an overcomplicated response with limited actual ability to make a difference in the problem.

Hillary has promised to bring in over 500,000 terrorists from Syria and Iraq. We can expect thousands of citizens to be slaughtered l.

Let me guess, a muslim, of course a follower of Islam is the only likely person to ever commit such crimes. Islam is not a religion and can thus be banned in the USA without hurting religious freedom.