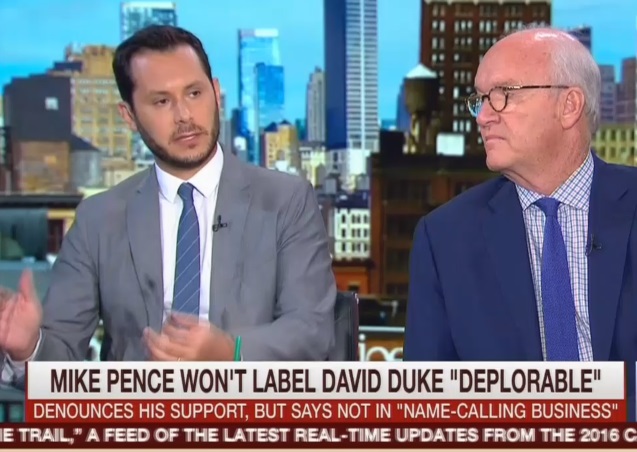 As liberal pundits go, I find Sam Stein among the least objectionable—a low bar to be sure. The HuffPo editor has a streak of fairness to him. But on today’s Morning Joe, Stein served up some absurd spin on Hillary’s “basket of deplorables.”

“Deplorables,” according to Stein, in a way “does work to her advantage.” Why? Because some moderate Republicans will “look at this division between the deplorables and the non-deplorables . . . and do say to themselves: do I want to be part of that?” A kind of snob appeal, Sam? Don’t think so, and even Joe Scarborough, who continued his attacks on Trump throughout the show dismissed the notion, saying “you don’t win voters by calling other voters irredeemable.”

Speaking personally: this Insurrectionist is not a “moderate Republican.” So I’m not in the group that Stein says Hillary is hoping to “cleave off.” Even so, I’ve had strong reservations about Trump. But Hillary’s “deplorables” has had the opposite effect on me that Stein described. Rather than making me want to disassociate myself from the basket, it makes me that much more fired up contra Clinton.

SAM STEIN: I don’t think Hillary Clinton did this thing as a three-dimensional chess grand strategy, but we did talk in the last hour about how there is a way in which this whole conversation does work into her advantage. And I think the Pence thing [his declining to call David Duke “deplorable’] illustrates that.

I think there is a chance that there are some moderate Republicans out there that look at this division between the deplorables and the non-deplorables, however you want to describe it, and do say to themselves: do I want to be part of that? I think that’s what the Clinton people are saying, is can we cleave off these Republicans? And she went out of her way to say there are people who are not deplorable in the Trump camp. I think she wants to win them and I think they want to have this conversation in order to get them so disgusted with the Trump camp that they actually consider her candidacy.

JOE SCARBOROUGH: I think so, but —

STEIN: — it might not be the best way to do it.

JOE: I believe most people around the table beleive, Mike, that you don’t win some voters by calling other voters irredeemable.

This Stein fellow seems to think that the average person actually listens to him and thinks he makes sense.

I am not of the de rigueur camp and I will not qualify my support of Trump. This isn’t about how conservative or not someone is (who is the judge of that anyway) or Trump is, it is about making sure that Hillary Clinton does not become President. She cannot, she must not become president. Everything else is secondary.

This Stein joker seems to think that because I was categorized by HRC as deplorable, that I should believe her and think to myself “Oh know I cannot be seen with the deplorable people!!!!” and then join her.

A woman who thinks she can put half of the voters into 2 baskets–the Deplorables and the not-quite so Deplorable is so “out of it” I can’t believe people still think she’s qualified to be president.

To be fair, it’s only a quarter of the voters at most. Not that that makes her claim any better.

The other half of Trump supporters, Clinton said, are people with economic stress who feel the government has let them down. James Taranto at the WSJ calls this basket “the pitiables.” So if you support Trump, she says, you’re either some kind of monster or a helpless, feckless failure.

But isn’t that the same as T-rump’s appeal?

Doesn’t he pretend to be “outside” the government that has failed Americans.

A government that he expressly claims “only he can fix”?

How pitiful is it for anyone calling themselves “Americans” to buy that snake oil? Much less anyone who ever pretended any “conservative” values?

“I’ve had strong reservations about Trump.”

Have you ever expressed them on this blog? Maybe you have and I’ve just missed them, but I had the impression you were on the Trump Train from the beginning. NTTAWWT.

Fair point: don’t know that I have expressed my reservations in blogs, though believe I have in at least one Quick Hit. But as I’ve said to friends and colleagues, when I read a take-down of Trump by a NeverTrumper like Jonah Goldberg, I find myself agreeing with the characterization of Trump’s personality, knowledge level, etc.

But then I think about the alternative!

Joe Scarborough is a snake. During the primaries he was such a big Trump booster that it worried MSNBC, http://money.cnn.com/2016/02/12/media/joe-scarborough-donald-trump-nbc/. Now he is all about criticizing Trump. Why do you think that is?

Because he, like most Leftists, saw Trump as the easiest one for the Democrat nominee to beat. So yes, he wanted him as the GOP nominee. Most leftists did.

Mika.
He thinks that if he trashes Trump eventual he will “get to hit that”.

The polling consistently says that people across the political spectrum don’t trust Hillary and that they know she is a liar.
So what would the old hag think this gambit will change anyone’s mind?

She’s desperate, and probably has a few screws loose in her head as a result of repeatedly banging it against shit when she’s falling down.

Like an old dog that has lived beyond it’s time, the Dims need to take Hillary for “a walk down by the creek.” Watch for it to happen soon.

She was playing to her “New York values” base, and they LOVED it.

She has voter enthusiasm problem. This is probably how she’s addressing it.

Absolutely NOT. She was playing to her donating base, and trying to delineate between her side and T-rump, which is a BIG part of what ANY campaign for national office HAS to do.

Was it ham-fisted? Sure. It was polemics. But it did what it was intended to do, and on several levels. It certainly was not a “gaffe”.

But NO conservative is going to vote for Hellary because of being in fear of being a “deplorable”.

Well, ok, the CAPS LOCK has me convinced. “NO conservative is going to vote for Hellary”, but” real conservatives” would, provided its the guidance they receive from their conscience.

her “irredeemable” comment was actually worse. History shows that governments have a standard method of dealing with people that are seen as irredeemable.

Demagogue: a political leader who seeks support by appealing to popular desires and prejudices rather than by using rational argument.
————————————————

As a NOT-T-rump supporter, but a guy who is guilty on pretty much all counts of Hellary’s “Les Deplorables” demagoguery, I have to observe that the demagoguery of our side is no more acceptable.

Are BLM people “deplorable” to us? Sure they are!

Are some of our opposition “irredeemable”? Hell, yeah!

So, when T-rump demagogues right back and castigates Hellary, he’s doing what we pretend to deplore.

Rags, why don’t you just admit you’re a Hillary shill?

I mean, you like making excuses or equivocations for her, so just admit you’re voting for her, and that you like her.

Instead of attacking me with your bullshit lies (I’ve been an outspoken critic of “Ol’ Walleyes” and “Lady Macbeth” here for FLUCKING YEARS…look it up, liar),

TRY dealing with the rational argument I made.

Can you identify the “deplorables” in this video?

It’s time to fight back on just who has the most deplorable supporters!

Trump supporters put their hands over their heart, stand and sing the National anthem.
Hillary supporters take a pass.

Feel free to add. I for one refuse to apologize for supporting Trump – the choice is clear on which basket I wish to be in.

My MIL is a Hillary supporter.

I, for one, never wanted to be associated with the Deplorable faction of the Trumpies. Of course, to a certain type of Trump supporter I’m “virtue signaling”. “Virtue signaling” is an AltRight term, btw.

The only interesting thing in this video is that it looks like Zika almost had a brainwave. Fortunately it self-aborted. “Alt right” is the hot new label now in the hive now because its only a glottal stop from either *phobic, racist or, the cherry on top, nazi. “Deplorables” and “alt right” are interchangeable. They keep their world very simple.

And those of us who ARE conservatives work at trying to make sure the term is used appropriately. Look up Jonah Golberg’s excellent interview with Hewitt.

The house toad has been flushed out to try and find some roaches in defense of Grandma. That was easy.

It finds bigotry everywhere, even in borrowed innocuous lyrics. The “man is a two face”.

Rags, as far as the nasty Democrats are concerned, Burns is correct. That does not make it true, but the Democrats are pushing the notion that the political opposition is subhuman and a rational target for violence. And, the story has been spiked by the MSM.

Val, THAT’S a tendency ALL of us share and need to guard against.

I’ve heard Levin…who is usually pretty careful…refer to our opposition as “rats” and “cockroaches”.

That’s a dangerous place to go, as shown everywhere from Germany to Rwanda.

Too rich coming from the character who always a syllable away from dehumanizing. Right, from “Germany to Rwanda”. You forgot “From Natchez to Mobile”.

Bigots are where you find them, and they were never limited to the South. They can be found in Chicago, Boston, New York, and Los Angeles. As you demonstrate.

Hillary’s slogan for the speech denouncing millions of Americans was something about all of us being together or something like that. They found the little sign in the garbage can after her talk.

Voting has nothing to do with being “associated” with anybody. As was foreseen centuries ago.

Ballots are secret for a reason.

Clinton is a Pro-Choicer. Her Church recognizes millions of deplorables in America alone. That is their religion. Also, their doctrines of class diversity (e.g. racism) and class warfare were already well established. They are notoriously selective.