Scarborough Apologizes to Mika for Showing Coughing Clip; ‘I Wasn’t Even Going to Bring It Up’ 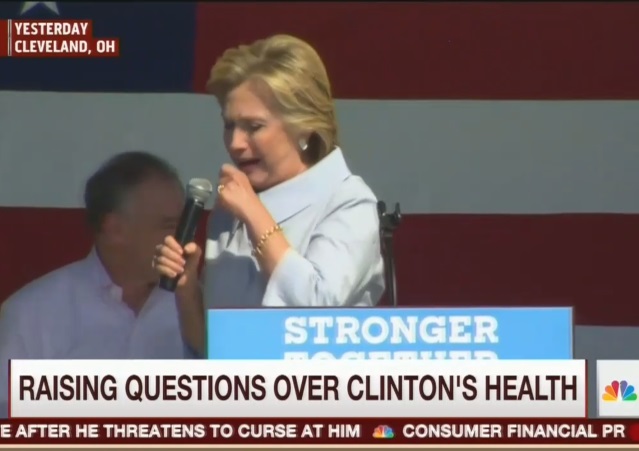 A leading candidate for President of the United States has a documented history of serious health issues, including a blood clot on her head. She has had at least two fainting episodes, including one in which she fell and broke an elbow bone. During this campaign season, she has been plagued by numerous coughing fits including two just this past weekend.

The candidate, of course, is Hillary Clinton. Yet Joe Scarborough and Mika Brzezinski were very reluctant even to raise the issue on today’s Morning Joe. When Scarborough announced they were about to show a clip of one of Hillary’s coughing fits, Mika declared “I don’t want to show it!” Scarborough apologetically said “I thought you wanted to! I wasn’t even going to bring it up.” But not to worry. As to Hillary possibly having a health issue, Mike declared: “No, she doesn’t. That’s just BS.” And Scarborough was right there to second her: “she doesn’t have one,” later explaining “we all cough.”

Note: Mika’s tactic was to change the subject from Hillary’s health problem to criticism of running mate Tim Kaine for failing to step up and help Hillary during her coughing fit. But can you blame Kaine? If he had taken the mic from Hillary as Mika suggested, the headlines would have been “Hillary Unable to Continue, Kaine has to Rescue Her and Take Over.” And speaking of health issues, Kaine might have had a serious one of his own thanks to a Clinton campaign staff furious at him for making Hillary look helpless.

Note Segundo: Viewers would have thought Hillary only had one coughing fit this weekend. The only one mentioned or shown occurred at a campaign event as Hillary was recognizing Rep. Marcia Fudge. But there was a second coughing fit, as Hillary was speaking to the press corps that was—finally—permitted aboard Hillary’s campaign plane.

MIKA BRZEZINSKI: I’m just going to start with what Trump is leading with trying to make it look like Hillary Clinton is sick or something because she coughed. Just want to know where Tim Kaine was when he was clapping behind her for two minutes like this. If I had a coughing fit on the air, what would you do? You’d probably take over and help out. Tim Kaine, come on. What are you doing?

JOE SCARBOROUGH: He probably could have stepped to the microphone,

MIKA: What are you doing?! Step up! Take the mic! Get a drink of water.

JOE: Because you do that: somebody’s coughing or whatever.

JOE: We have all the conspiracy theories. Somebody was asking–does this prove that she has something wrong with her?

MIKA: You help out!

JOE: It’s a tough schedule. It’s a really rough schedule. And sometimes, you know, you cough and do stuff like that. There’s no great conspiracy here.

STEVE RATTNER: Look, if she had a health issue, do you think she would have been on the road 360 days a year for the last two years?

JOE: She doesn’t have one.

JOE: Okay, here’s a little bit of the coughing.

MIKA: I don’t want to show it.

JOE: I thought you wanted to! I wasn’t even going to bring it up.

Cut to clip of Hillary coughing fit at a campaign event.

JOE: All right. All right. This goes on for two minutes. And Tim Kaine —

MIKA: And he just sits there!

JOE: — look at him. He’s just sitting back there.

JOE: I was playing parcheesi last night with my kids.

JOE: Let’s just get off of that.

MIKA: Get off. She’s awesome. Not sick!

JOE: We all cough.

He gets the Baghdad Bob award.

So who are you going to believe? Joe and Mika or your lying eyes?

Dr. Joe is a qualified proctologist having had his head up his backside for so long.

Proctologist? His hemorrhoid transplant was a do-it-yourself procedure? Wow….

Wow. Joe is kicked-in-the-head crazy about Mika. There was a 2-word phrase for that condition back in the 60’s, but they probably call it something else now.

It’s going to be interesting to see how the media covers for her if she has one of these coughing fits, or takes one of her 15 minute potty breaks, or passes out, or has one of those head-jerking spasms during the debates.

But rest assured they will. She could strangle a black baby on stage during the debate and the media would find a way to cover for her.

It’s disgusting really. A complete failure to live up to their own professional code of ethics. Many in other professions would be subject to civil suits for such breaches.

If they are going on the offensive, the issue must be starting to take hold in polling … Good.

Makes you wonder, since now is rubber hitting the road time. If she can keep it up.

But it makes me wonder about another thing.

When Trump wins, and Hillary is indicted, will she try to argue poor health to avoid jail time?

Of course she will claim poor health. She already claimed the earlier concussion and stroke caused her to be unable to remember much of anything from her stint as Sec. of State.

I’ve been told that once you’re terminal, it’s really not an issue any more.

There is nothing wrong with Hillary’s health, she is simply so deep into so many different pockets that she is choking on pocket lint.

I was go *cough* ing to comm *cough* argh

but we all *cough*, Shrillary is just fine, doc said so *cough*
*cough* *cough*

Hmm, has she been drinking from the toilet?
https://www.youtube.com/watch?v=3UghPnepp3o

I can’t say the whole diagnosis part is accurate but there are two things of major interest in the video.

That some of the leaked emails show that Hillary was having people research Parkinson’s drugs.

That some ex secret service agents claim she has Parkinson’s.

She didn’t believe it when she was told that drinking Sterno was not a good thing to do.

I just saw a piece on the news that said ti was reflux.

Hmmm.
I wonder if perhaps Trump decided to run because he found out exactly what was wrong with her.