Donny Deutsch: Hillary ‘Does Not Lie’

Donny Deutsch: Hillary ‘Does Not Lie’ 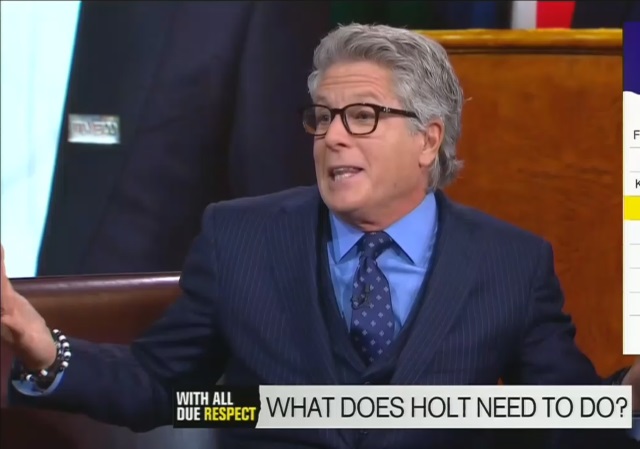 Heading into the weekend, how about a real rib-tickler to go along with that half-price Happy Hour beverage? On today’s With All Due Respect, guest host Donny Deutsch actually said of Hillary Clinton “she does not lie.” Hope you didn’t spit out that drink!

As soon as “does not lie” left Donny’s mouth, he had to start semi-backtracking: “well, we’ve seen instances as far as the email where she was not forthcoming and she actually did lie, but on a day-to-day basis as part of her campaign DNA it’s not in there.” How ironic of Deutsch to claim that lying is not in Hillary’s DNA. The most famous line on Hillary’s losing struggle with the truth came from the late, great William Safire, who called Hillary a “congenital liar,” i.e., baked into her DNA, Donny.

Safire’s line was from way back in 1996, when Hillary was just a promising neophyte in the lying game. She has since added a ton of untruths to her resume: this article details seven recent ones.

DONNY DEUTSCH: I said an interesting thing this morning, hopefully it was interesting, on Morning Joe. I said Hillary at some point, because she’ll say you’re lying and he’s going no, I’m not. She should say, all right, everybody at home, Google, right now, 100 million people, let’s all Google together. And I think we do have that ability because he just blatantly lies and just is not called on it. So it’s going to be up to her, not Lester Holt.

MARGARET TALEV: Whose the pressure on most, I guess more on her than Lester Holt because she’s actually trying to win a race, right?

DONNY: It is because she does not lie. I mean, well, we’ve seen instances where, in terms of, as far as the email, she was not forthcoming and she actually did lie. But on a day-to-day basis as part of her campaign DNA, it’s not in there. He has actually used lying as a strategy.

It depends on the definition of “truth”.

I think you spelled his name wrong….shouldn’t it be Douche. 😉

She is the worst forthcominger I ever saw.

We’re entering an era when objective reality no longer matters. Thanks Obama.

Progressive politicians have to lie. Their entire political strategy hinges upon getting the useful idiots of this country to put them into power and keep them there despite their screw ups. A progressive politician’s day is made up of lies from morning to night.

They’re lying about the US being racist, the wealthy not paying their “fair share” in taxes, why health care and college prices are so high, how to fix failing schools, whether global warming is a real crisis, why the 2007 financial crisis happened, whether Iraq was a success (as of 2008), when life begins (conception), how often rape & sexual harassment occur on college campuses, whether domestic terrorists are equivalent to jihadis, about how dangerous guns are, whether they supported Jim Crow, the Soviet Union, Chairman Mao, etc, whether tax cuts can jump start a slow economy and bring in more revenue over time, etc etc. I could go on two more pages.

Is it really any surprise that they’ll tell a few lies in the midst of all of that to advance their career or cover for their mistakes?

One of George Carlin’s rules to live by was “I don’t believe anything my government tells me”. Note that he didn’t make an exception for Democrats, even though he was left-leaning himself. Many liberals and progressives themselves know that they are lying about something but think there’s some truth in their somewhere, while others just swallow the propaganda in true Doublethink style. But the politicians themselves absolutely without question know that they are lying all day every day.

I first saw Deustch about 20 years ago. It only took a minute or two to identify him as a leftist hack. Haven’t wasted another minute on him since, and never regretted it.

Hillary is in fact a congenital liar as Safire noted, but so is Trump. They are without doubt the worst pair of major party nominees in our history. People who would vote for either, or who elected & reelected Obama, are not fit for the great American Experiment. Our country will suffer further serious damage no matter which of these miscreants wins, and we cannot say we don’t deserve it.

Care to say who you will vote for on November 8th? Just curious.

One of the mysteries of this election year is to what extent Hillary and Trump believe their own B.S.

…except when she’s breathing out. Or typing.

These people are as bad as the Soviets, more corrupt, and half as smart.

These people are as bad as the Soviets, more corrupt, and half as smart.”

The KGB were too smart to be true believers in communism. And, no, I’m not a fan of Putin or praising him. They were my enemies most of my professional life, and all I’m saying is never underestimate your enemy. I despise the Checka for many reasons, but not being smart isn’t one of them.

But if Obama and his minions including Clinton are half as smart as the Soviets, what does that make the Republicans who keep losing to them?

He’s right! She follows the George Costanza motto, “It’s not a lie… if you believe it.”