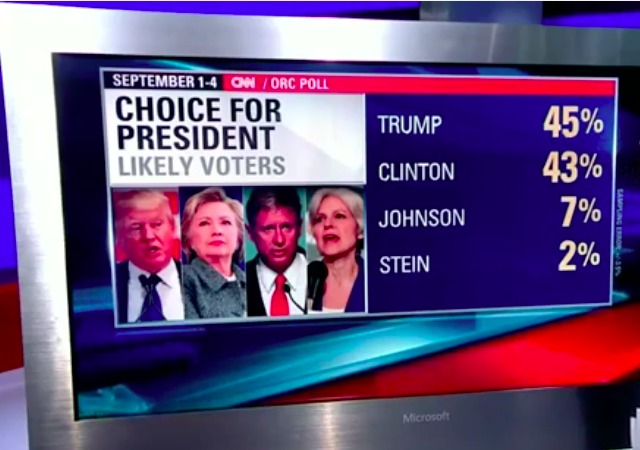 Donald Trump has taken the lead in the latest CNN poll:

Trump tops Clinton 45% to 43% in the new survey, with Libertarian Gary Johnson standing at 7% among likely voters in this poll and the Green Party’s Jill Stein at just 2%.

The network conducted the poll from September 1 – 4 “among a random national sample of 1,001 adults. It included 886 registered voters and 786 likely voters.

Libertarian candidate Gary Johnson continues to try to get on the debate stage, but he needs to have a 15% standing in the polls in order to make it. The first debate is in 3 weeks on September 26.

Just went to the Canfield Fair this weekend. That’s in Mahoning County, OH where Youngstown is. The area has been a Democrat stronghold for decades now. Working Democrats that is, not the give-everybody-free-money kind. I saw perhaps two people carrying Hillary signs or shirts. I saw at least 100 Trump signs, hats, or buttons. There was a line to get in the Republican tent. The Democrat tent had some guy dressed as Uncle Sam on stilts to entice people to no avail. Trump even came to the Fair on Labor Day.

I’m not enthusiastic about Trump but I think it says something that a Democrat stronghold seems to be overwhelmingly supportive of him. Say what you will about people that go to an old-fashioned county fair, but that’s the heartbeat of America and it’s voting Trump.