DePaul U. to Hold Event Before Election Telling Students Why They Shouldn’t Vote

DePaul U. to Hold Event Before Election Telling Students Why They Shouldn’t Vote

None of the above. 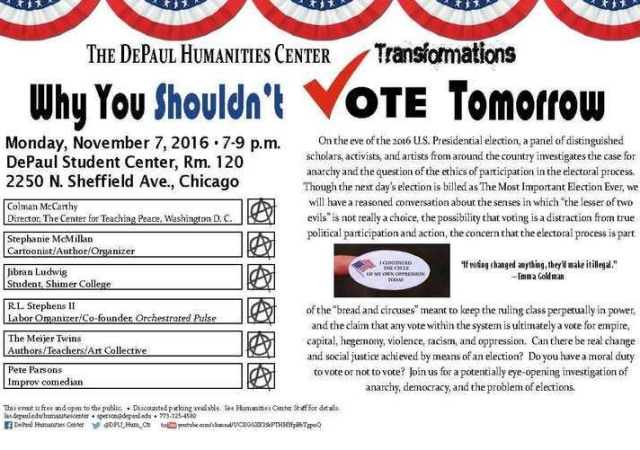 I’m actually all for this. If students don’t know who they should vote for, let them sit this one out.

The latest polls are showing almost half of millennial voters either support a third-party candidate, don’t know who to vote for, or won’t vote at all in the upcoming presidential election.

Instead of encouraging students to pick a side, DePaul University will host an event titled, “Why You Shouldn’t Vote Tomorrow.” It will take place on Nov. 7, the day before the election.

The event will discuss participation in the electoral process and investigate “the case for anarchy.”

According to the event description, students “will have a reasoned conversation about the senses in which ‘the lesser of two evils’ is not really a choice, the possibility that voting is a distraction from true political participation and action, the concern that the electoral process is part of the “bread and circuses” meant to keep the ruling class perpetually in power, and the claim that any vote within the system is ultimately a vote for empire, capital, hegemony, violence, racism, and oppression.”

Speakers at the event will include several authors, political organizers, a cartoonist, and an improv comedian.

“This event is a sad consequence of the Bernie Sanders ‘revolution,’ Nicole Been, president of the DePaul University College Republicans, said. “I had a feeling when Bernie lost to Hillary his supporters would become disengaged and angry at the system, which on the Democratic side they should be.”