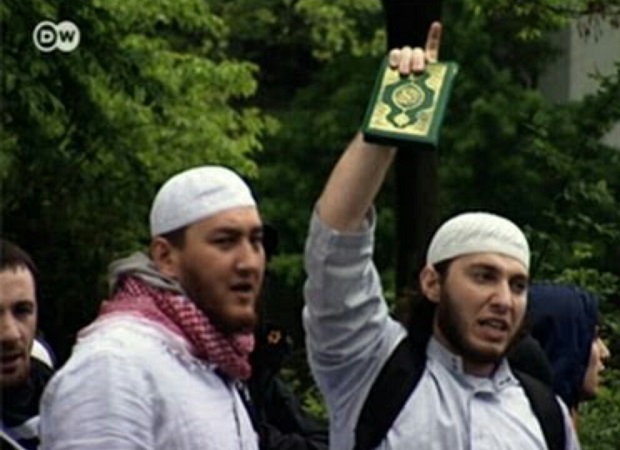 The first clashes erupted in the eastern German city of Bautzen, where apparently drunk migrants threw bottles at police and other locals. Authorities were forced to restrict the movement of the refugees and impose a ban on alcohol. The restriction aimed at young migrants caused an uproar among liberal politicians and media commentators who accused the local police and the mayor — a leftist himself — of ‘acting in a racist way’ against ‘traumatised young migrants.’ Leading German weekly Der Spiegel reported the temporary imposition of restriction on refugees in the city with the headline titled “Victory for the racists.”

Similar incidents are being reported in other German towns as well. The breakdown of law and order situation further undermines Chancellor Merkel’s position who has vowed to stay the course on her generous migration policy despite latest electoral drubbings.

Dresden-based newspaper Sächsische Zeitung was one of the few German media outlets that reported these clashes:

After clashes between young refugees and locals belonging to right-wing scene in [the East German city of] Bautzen, there were similar clashes in Hoyerswerda on Sunday. (…) Police dispatched officers deployed in Bautzen over to Hoyerswerda. “The officers separated the conflicting camps and calmed down the tempers with their presence”, so it was reported. The identities of the ring-leaders were registered and thereafter the refugees returned back to their housing. Where the anger [of the refugees] was redirected at to the 44 year-old security guard. He remained unhurt.

Even in Radeberg there was an incident. Here the police is investigating an aggravated battery that reportedly took place on Friday in railway station compound. [Author’s translation]

Merkel, on her part, still thinks that her party’s defeat in one state election after another is merely a PR problem. “If one of the reasons for the bad performance of the CDU is that the direction, aim and the underlying conviction of our refugee policy were not sufficiently explained to some people, I would like to put more effort into this,” she told reporters Monday.

Once the most powerful politician in Europe, Merkel is turning into a political pariah. Even liberal European leaders, eager to win elections at home, are distancing themselves from Merkel and her failed migrant policy.

However, the sharpest and the most direct attack came from Italian Prime Minister Matteo Renzi who accused Merkel of ‘lying to the public about European unity.’ Sunday, Italian Prime Minister Renzi did not join German Chencllor and French President Hollande at the news conference in EU Summit’s closing statement in the city of Bratislava.

Merkel’s uncompromising stance on migrant issue has not only isolated her country within Europe and destroyed the conservative based of the once-mighty Christian Democratic Party, but also mobilized neo-Nazi groups that hitherto lurked on the drank fringes of German society. Months of hated political debates are now giving way to violent street clashes in Germany.

Will today’s clashes turn into tomorrow’s civil strife? Are these signs of things to come?

Only time will tell. But as armed thugs roam German streets, it should unnerve even those who have a vague sense of history.

When your country is actively being invaded by people with hostile intentions and who have no desire to assimilate, you have every right to fight back (with the tools your government didn’t take from you already). Such a sad state of affairs in Europe. The ridiculous thing is that Eurocrats think they are better than their ancestors of the past 2,000 years. All of a sudden they think everybody within the continent and even outside it wants to get along and be their friends. World history should tell them otherwise that we really are no more “enlightened” than our forefathers (and foremothers) were.

Exactly why the Constitution is not now…and cannot ever be…passe.

Human nature is what it is. It never changes, and the Framers understood it so remarkably well.

The situation in Europe will get much worse in the process of getting better.

Obama and Clinton’s abdication of responsibility, miscarriage of justice, pursuit of anti-native policies, and progressive wars reap benefits beyond the refugee crises.

RE: “The first clashes erupted in the eastern German city of Bautzen, where apparently drunk migrants threw bottles at police and other locals.”
What!? Those sound like really good Muslims.

Utopian leadership in both countries, the US and Germany have brought us to where we are at. While Germany leads in the descent from reality, our own little poser puppet emperor has done a bang up job of tearing our country down.

I see a huge shift for both countries in future elections. Hopefully the democrats here will be tossed aside soundly in November…

Its a PR problem, she just didn’t get the word out successfully.

This is the mantra of those with myopia of the soul.

Like Hillary Clinton’s people saying that if the people would just get to know her, they’d fall in line like lemmings. We’ve had 30 years to get to know the Clintons and their stench is more powerful then ever.

The same with Merkel’s policy of unlimited refugees. If only her people could make the case, then everyone would settle down and things would get back to normal. It’s been a few years now and I believe everyone knows her policy.

Like when Algore lost the election, it was because the people just didn’t know him and if they did, why, we’d all have embraced him.

So it is when ever the leftists lose some election or other. They just couldn’t seem to get their message out.

Alas for them, we know them too well.

Yes, Merkel reminds me of that other prominent leftist idiot, Barry Obama, who also believes that his horrible policies would have been loved by Americans, if only he’d spent more time explaining to the ignorant masses the genius of his vision.

I want to hit that idiot holding the Quran with a shovel.

There. I said it.

With a fiberglass handle? Hickory can break if abused too much.

Dude, come on. Nothing beats a good piece of hickory. Was that a trick question?

I would like to introduce you to my Collins forestry axe, my Woodings Verona camp axe, my Gransfors Bruk splitting axe.

All wood. No fiberglass. There’s a right way to do this.

Yes, I know about Ash and Birch.

I was thinking more a double-tap between the eyes.

Don’t bother with the head, it doesn’t contain a vital organ.

I can remember when Germans were very efficient at solving
these kind of problems …
wonder when they will wake up and go WTF ..
and then fix it .. hope they do it soon … before it is
to late

Muslims in the land of brats and beer, no wonder they’re tense. Its demeaning to get free room and board and not have people cater to your every religious quirk. They’d better get a little more pensive about this tack however, its a long cold walk back to war-torn wherever.