Committed the crime of cultural insensitivity, aided and abetted by a University retweet. 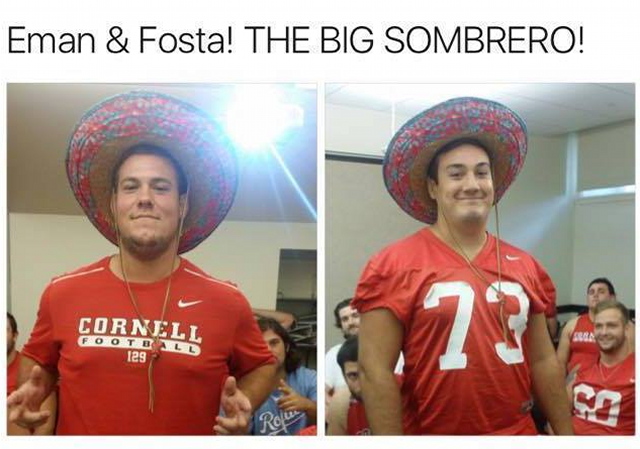 A football coach at Cornell University tweeted a picture of players wearing sombreros and that’s a big problem for some reason.

Fresh off the heels of Cornell football’s first win of the season, offensive coordinator and line coach Roy Istvan received backlash after tweeting a picture of players in sombreros, with the caption “Eman and Fosta! THE BIG SOMBRERO!”

The tweet was criticized by Movimiento Estudiantil Chicanx de Aztlán de Cornell, or MEChA, a student organization that “promotes higher education, cultura and historia,” according to their national website.

“I think this is indicative of the problem that a decent portion of Cornellians kind of don’t have sympathy for one another,” said Barbara Cruz ’19, the secretary of MEChA de Cornell. “Cornell prides itself on ‘any student, any study,’ but it kind of feels as if a lot of people don’t want us here.”

Cruz added that she feels the tweet is another example of Cornell trying to be “funny” and “wacky,” but said she does not understand why their enjoyment comes at the expense of the latino community.

The picture of linemen John Foster and Alex Emanuels Istvan’s caused a firestorm on social media, especially because the tweet — which has since been deleted — was retweeted by the University’s official twitter page.

Even if the University did not add any language to Istvan’s tweet, the fact that they retweeted the message was upsetting to many Cornell students.

“[I am] absolutely embarrassed to attend a university that publicly, or not publicly, supports this , and hope to work collaboratively to ensure that university communications, and all staff and faculty, receive much needed diversity and cultural sensitivity training,” Matthew Indimine ’18, the executive vice president of the Student Assembly wrote in a comment on MEChA’s post. 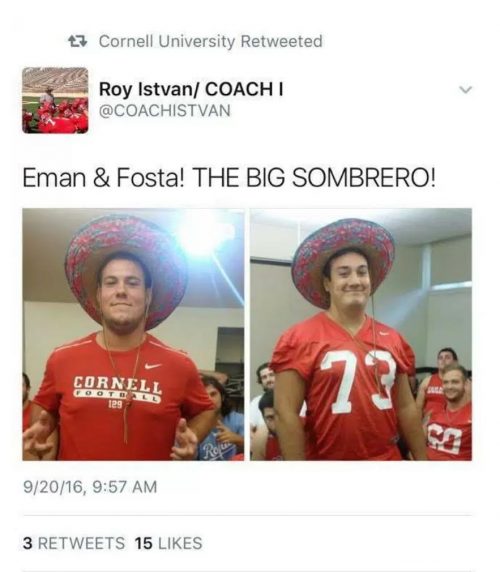 Here are tweets by the coach apologizing: 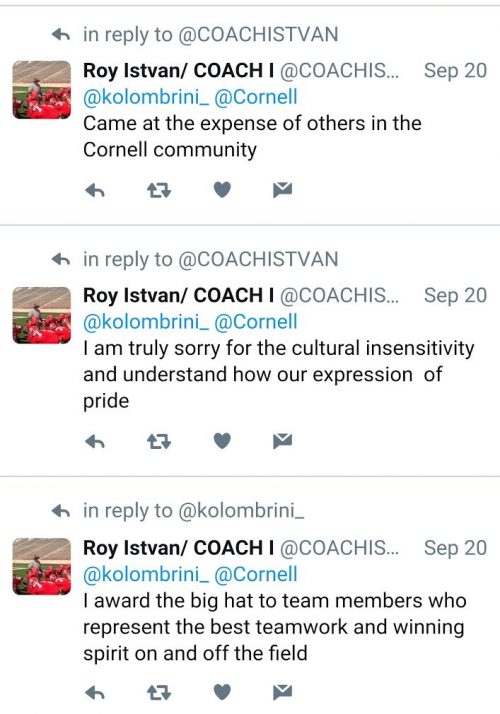 With all the weird crap going on at Cornell and they are worried about football players wearing sombreros? LOL! You’d think the SJW’s would be upset that there doesn’t seem to be any black players. Couldn’t Cornell lure some poor black athletes out of the hell hole they think the south is to the utopia that exists in New York? LOL!

Those guys should have put on a dress and said they self identified as Mexican women.