College Students Want to Ban Weapons They Can’t Even Describe

College Students Want to Ban Weapons They Can’t Even Describe

“It could have, like, those rings around the barrel.” 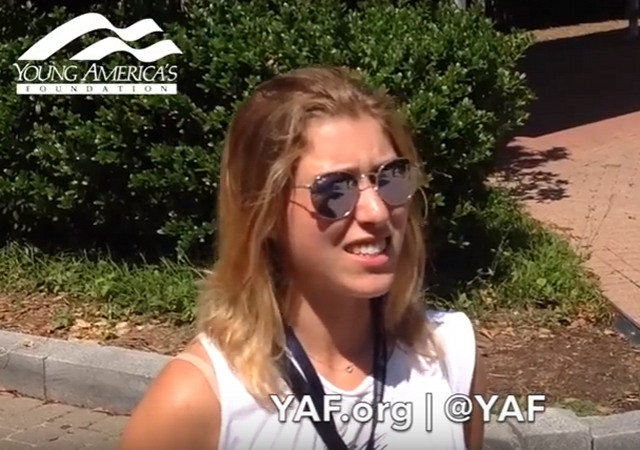 Young America’s Foundation recently visited the campus of George Washington University and asked students if they thought assault weapons should be banned.

While students believed strongly that they should be banned, none of them seemed to be able to describe what an assault weapon actually is.

College Students Know Nothing About the Guns They Want Banned [VIDEO]

Curious as to how fellow millennials would react when questioned about the proposed “assault weapons ban,” I took to the campus of The George Washington University to ask their opinions.

An overwhelming majority of the students I spoke with favored the ban on assault weapons, but couldn’t offer even the most basic definition of the term itself.

While a couple students confidently claimed, “A lot of people don’t know how to control their use of guns,” and “Anything above what a shotgun would be […] is just not necessary,” they simply couldn’t follow up by defining the very weapons they wanted to ban.

In fact, their answers were stunningly bizarre.

Many of their attempts to answer the question hit all the tired and overused liberal talking points about “military-style, high-capacity” firearms. When pressed to follow her strange definition to its logical conclusion, one young woman admitted that she believed a rock “is an assault weapon, I guess.” A helpful vegetarian offered hunting advice, warning against using assault weapons to hunt deer noting “you’re pretty much just making ground beef at that point.”

Some students were more honest, like the one who sheepishly admitted, “I don’t know anything about gun names.”

Others did their best to keep up their expert appearance. When asked to expound on what he meant by military-style assault weapons one young man wagered it might have something to do with the color of the weapon, saying it would be “made out of a different material, like something black,” with “more expressed features, like the trigger might be larger … it could have, like, those rings around the barrel.”

That way, at least their students would know what they’re talking about when it comes to guns.

The ignorance of these college students is funny, sad, and scary.
Funny as stupid is often funny.
Sad because somebody is paying for an education that is not delivered. They do not even know how to think at a basic level.
Scary because these fools vote for Democrats and totalitarian policies.

I have never heard such ignorant, dim-witted comments!

Theses are the idiots voting for Crooked Hillary!

PS Not all of them are voting for Crooked Hillary, some realize she is very sketchy!

Next time ask them about why Founders put in 2A? What role the British troops took in Boston that led to Parliament’s passage of the Intolerable Acts. History majors s/b able to answer this. And then ask why would so many ignorant citizens surrender these rights?

You’ve got to update your dictionaries.

Education: A system by which the government provides full employment to millions of radical leftists for the purpose of securing their votes in perpetuity and preparing children to become true believers in their cause.

One more demonstration of the uselessness of a non STEM “education.”

I’m so glad I don’t have to hire college grads.

Bimbo vegetarian thinks you get ground beef from deer. Oh MY!

Not to mention that he thought one bullet could grind the meat in an entire deer.

35% of Americans can’t name a single branch of government.

All those college students and not one Gamer. Many Gamers have never seen a real firearm, but they know the difference between MG, SG, SMG, AR and Sniper Rifle.

An unreasonable question, because every one of these kids has seen them on television or in films and knows exactly what they are:

These are all very reasonable criteria for drafting a gun control law, especially when the constituency making the demand believes that the Civil War ended in 1912, Hitler was Richard M. Nixon’s running mate, and socialism will let people of color who don’t have a Mercedes buy one.

We’ll all be drinking that free bubble up and eating that rainbow stew.

If you are limited by definitions, that defeats flexibility. The left wants to rule by decree, witness Chairman O’s pen and phone, pivots on Obamacare rules.

I have yet to watch the video, and STILL, I have the urge to take these people by the throat,shake them like a rag doll, and slap some sense into them.

Up until about 2013 I was involved in a restaurant that had relatively primitive record keeping system. The tags or the bills were hand-written. And surprisingly they had to be written in English.

I would have loved to hire native born Americans. But only the foreign born could write English. I have no explanation for any of this. I’m not making it up. All I know is someone born in Hong Kong or Vietnam can write better in English than someone in South Dallas.

If Liberals were serious about accidental shootings by children, they would mandate Eddie Eagle classes in all grade schools.

But that would provide them with fewer little caskets to dance on while doing their gun grabbing rituals.

I agree that people should not be voicing opinoins on things they are not clueless about.

How many people here have been defending Fiorina’s performance at HP, but didn’t even know who she was in 2000?

How many people here have been voicing opinions on encryption but can’t answer the following questions. What is the difference between pgp and gpg? What is symmetric encryption. What is public key encryption? ( BTW these are not esoteric questions, they are all things a user of encryption should know. )

I knew who she was in 2000, as I worked for HP, and could answer those encryption questions. Let us not confuse sales with leadership.

Assault weapons have a bullet button!