Who’s up for a “civilian oversight board” with the power to set police policy and hire/fire officers? 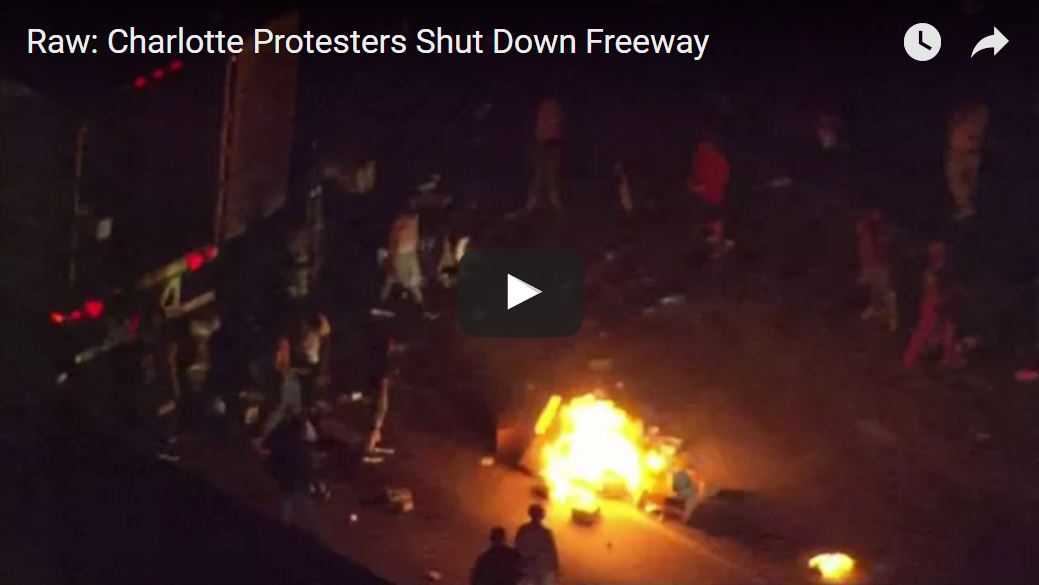 We’ve been covering the Charlotte protests here at LI, and the lasted development is quite a doozy.  They’ve released a list of demands that boggles the mind and steps perilously close to the federal definition of terrorism.

Protestors in Charlotte have made quite a few demands over when they’ll end their rallies, not the least of which are the “demilitarization” and “defunding” of the city’s police department.

The death of Keith Lamont Scott sparked major unrest over the past few days, which created enough pressure on Charlotte police that they released their body cam footage of the fatal encounter. Even so, protest participants of are circulating an online set of terms for when they’ll call it quits completely, and…it’s a pretty sizable assortment.

The list includes defunding the police department while simultaneously demanding it pay “reparations” for police violence.  The protestors also want the immediate release of protesters arrested for violence in relation to the protests, as well as the dropping of all charges against them.

Another ludicrous “demand” is the establishment of a civilian police “oversight board” . . . that has the power to hire and fire police officers and the power to “dictate police policies, priorities, and budgets.” 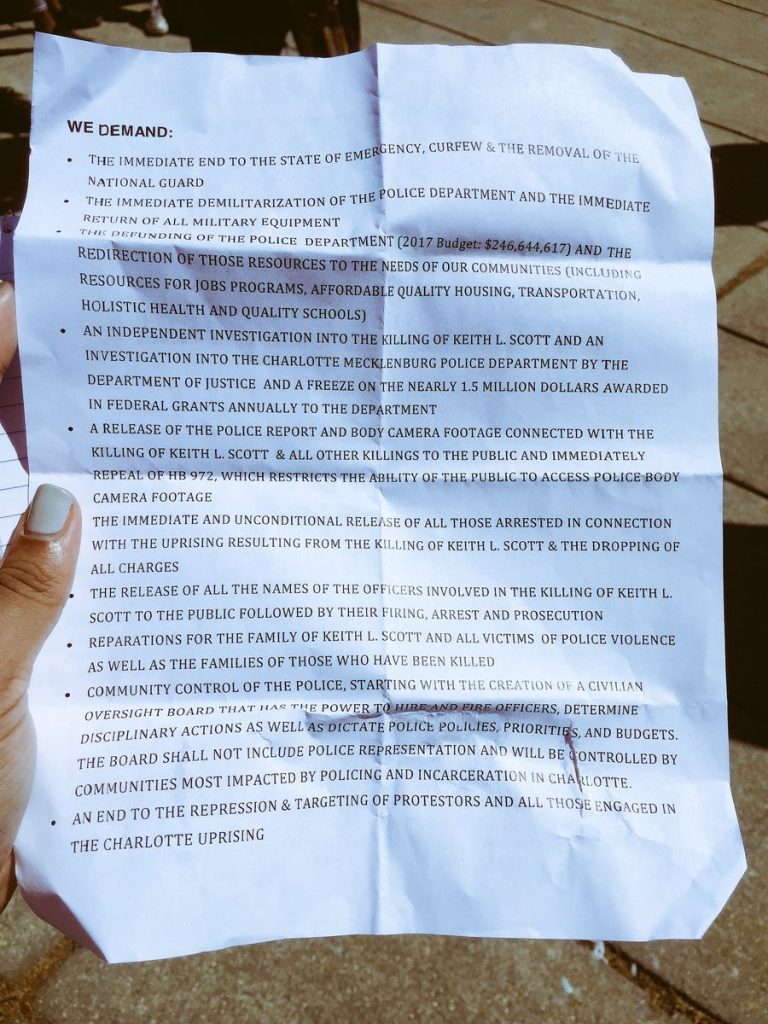 1. THE IMMEDIATE END TO THE STATE OF EMERGENCY, CURFEW & THE REMOVAL OF THE NATIONAL GUARD

3. THE DEFUNDING OF THE POLICE DEPARTMENT (2017 Budget: $246,644,617) AND THE REDIRECTION OF THOSE RESOURCES TO THE NEEDS OF OUR COMMUNITIES (INCLUDING RESOURCES FOR JOBS PROGRAMS, AFFORDABLE QUALITY HOUSING, TRANSPORTATION, HOLISTIC HEALTH AND QUALITY SCHOOLS)

6. THE IMMEDIATE AND UNCONDITIONAL RELEASE OF ALL THOSE ARRESTED IN CONNECTION WITH THE UPRISING RESULTING FROM THE KILLING OF KEITH L. SCOTT & THE DROPPING OF ALL CHARGES

7. THE RELEASE OF ALL THE NAMES OF THE OFFICERS INVOLVED IN THE KILLING OF KEITH L. SCOTT TO THE PUBLIC FOLLOWED BY THEIR FIRING, ARREST AND PROSECUTION

8. REPARATIONS FOR THE FAMILY OF KEITH L. SCOTT AND ALL VICTIMS OF POLICE VIOLENCE AS WELL AS THE FAMILIES OF THOSE WHO HAVE BEEN KILLED

9. COMMUNITY CONTROL OF THE POLICE, STARTING WITH THE CREATION OF A CIVILIAN OVERSIGHT BOARD THAT HAS THE POWER TO HIRE AND FIRE OFFICERS, DETERMINE DISCIPLINARY ACTIONS AS WELL AS DICTATE POLICE POLICIES, PRIORITIES, AND BUDGETS. THE BOARD SHALL NOT INCLUDE POLICE REPRESENTATION AND WILL BE CONTROLLED BY COMMUNITIES MOST IMPACTED BY POLICING AND INCARCERATION IN CHARLOTTE.

10. AN END TO THE REPRESSION & TARGETING OF PROTESTORS AND ALL THOSE ENGAGED IN THE CHARLOTTE UPRISING

Presumably, the protests, riots, and violence will continue until these demands are met.

The NAACP released its own list of demands yesterday.

Wow! All caps. Now I am really scared.

“All caps”
Maybe they want us to think it came via teletype? 🙂

Sorry, I inadvertently voted you down while hitting reply.

Nah, I think they did it the old fashioned way. They tied it around a brick and threw it through a window.

At least it was written in reasonably good English.

But the font is so scary!

I disagree. They are NOT protesters. They are rioters, thugs, and thieves.

My demand is time in jail for the rioters.

The Brownshirts wrote, in part:

Hey juice-boxers, perhaps you didn’t know this, but all that military equipment? It came from the federal government in the form of grants and surplus equipment.

Guess who accelerated that in the last eight years? Yup, Barack Obama. Champ himself.

Go ahead, shoot the other foot…

Oh, that is totally lost on them.
Obama knew exactly what he was doing when he drew down troops and gave the surplus to LEOs across the USA.
I’m deplorable, he is despicable.

Funny hos wife never mentions the restraining order she ttook out against him last year.

She also claimed he had no gun just before he got shot, only a book and a brain injury. She was interfering with police business, and should be charged with murder.

Who needs the police anyway? The next time you need help, just call a crackhead…

“Who needs the police anyway? The next time you need help, just call a crackhead”

Even better, it hasn’t occurred to these idiots that one purpose of the police is to protect thugs from mob violence.

I’m a former Marine with expertise in MOUT – Military Operations in Urban Terrain.

They need some head busting.

Sounds like all they need is a nice shiny guillotine to dispatch people they don’t like. All revolutions start the same way, idealists encountering reality.

I wonder if Hacking Hillary will asked in the next debate if she favors these demands? Not to worry, Trump will be asked again about Obama and his birth certificate.

70% of the arrested “Charlotte Protestors” are from out of state.

It’s past time that Black Lives Matter was designated a terror organization, and its leaders and funders (including George Soros) arrested. After, all Black lives matter members are responsible for the deaths for over 12 cops.

I doubt they imported “protesters” in any significant numbers. There was no shortage of morons and criminals, and so no need to import them. Every city in the USA of appreciable size has enough population to fill a riot roster.

“and I want the letter M stricken from the English language.”

Charlotte needs to go “Full Michael Corleone” on these idiots (some language NSFW):

“3. THE DEFUNDING OF THE POLICE DEPARTMENT (2017 Budget: $246,644,617) AND THE REDIRECTION OF THOSE RESOURCES TO THE NEEDS OF OUR COMMUNITIES (INCLUDING RESOURCES FOR JOBS PROGRAMS, AFFORDABLE QUALITY HOUSING, TRANSPORTATION, HOLISTIC HEALTH AND QUALITY SCHOOLS)

7. THE RELEASE OF ALL THE NAMES OF THE OFFICERS INVOLVED IN THE KILLING OF KEITH L. SCOTT TO THE PUBLIC FOLLOWED BY THEIR FIRING, ARREST AND PROSECUTION”

Who do you suppose is going to arrest these cops if the police department is defunded completely?

They’d be insulted to be made aware of it (like they are about everything else) but they are clearly cutting and pasting from the Berkeley Free Speech movement.
https://www.youtube.com/watch?v=WboggjN_G-4

Cutting and pasting? And I thought they were sooooo intelligent.

The key point is articulated in a quote from Anne-Marie Slaughter, the head of policy and planning at the State Department under Hillary Clinton. Her idea is that the “global administrative state would work through the ‘coercive power of vertical [government] networks’”:

Vertical government networks pierce the shell of state sovereignty by making individual government institutions — courts, regulatory agencies, or even legislators — responsible for implementation of rules created by a supranational institution.

Don’t you just love that? The globalists get the power, and get to pull the strings behind the national governments, and coerce them into doing their global will.

But first, before the globalists ascend Mt. Olympus, they need to “pierce the shell” and destroy the prestige and the power of the nation state; otherwise the national governments will still have the power to tell the globalist gods to go pound sand. How do the globalists do that?

It’s obvious. They divide and conquer. They set the people in each nation state against each other. They divide them up by class, by race, by gender, by tribe: Black Lives Matter; La Raza; Human Rights Campaign, CAIR. With one ring to rule them all.

What, no “safe spaces”, “triggers warnings” or puppy therapy?

Who’s up for a “civilian oversight board” with the power to set police policy and hire/fire officers?

I’m up for that. Isn’t that the city council?

If they defund the police dept why do they need an civilian oversight board?

Holistic health? Seriously? Isn’t it time to start treating them like criminals? I keep thinking of the riot control trucks in Soylent Green they would be perfect for this situation.

At least, they didn’t ask to have the letter “N” stricken from the English language.

Once you pay the DaneGeld you will never be rid of them (Kipling).

The reason we are dealing with this kind of BS today is because we caved to their eariler BS when the proper response was to throat-punch them.

It was a book!

CHARLOTTE, N.C. — The black man killed by Charlotte police had a restraining order filed against him a year ago when he threatened to kill his wife and her son with a gun, according to court documents obtained Tuesday.

Keith Scott’s wife filed the order on Oct. 5, saying that law enforcement officers who encounter him should be aware that he “carries a 9mm black” gun. Police have said Scott had a handgun when they approached him at an apartment complex last week. Officers told Scott repeatedly to drop the weapon and he was shot to death when he didn’t follow their orders, the Charlotte-Mecklenburg police chief has said.