Democratic lawmakers helping build up unions, who in turn donate to Democrats. 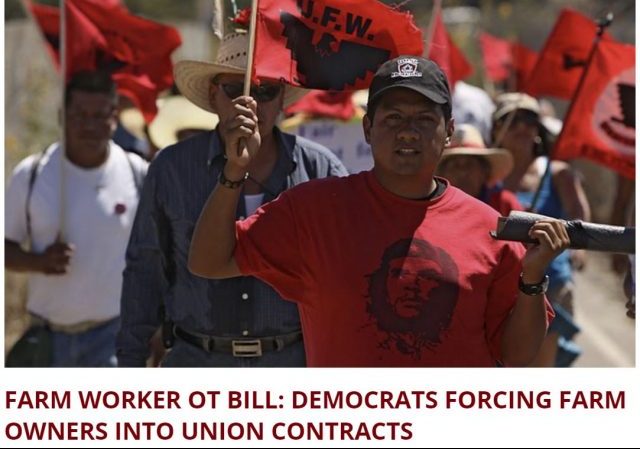 The California newspapers, television and radio have been going gaga over the “farmworker overtime bill” since the Legislature passed it August 29. They love it because it is more of the economic and social justice racket. But they are not telling you the entire story about Assembly Bill 1066….

This is because UFW collective bargaining agreements exempt workers from overtime and California’s minimum wage.

AB 1066 would require mandatory overtime paid to previously exempted farm workers. California farming employees have been exempted from daily overtime because the nature of the seasonal work is different from other industries, subject to the unpredictability of mother nature, and requires harvesting perishable food….

First the Legislature raised the minimum wage, and now has passed mandatory overtime for farm workers. “By 2023, the minimum wage across California will be $15 an hour,” the Heritage Foundationexplained. “Adjusted for inflation, this will be higher than any statewide minimum wage in U.S. history. It will also be higher than the national minimum wage of any country in the world. The real increase will be even greater in inland and rural areas that have lower costs of living. When fully implemented, this law will cover one-third of all employees in California.”

California is the only state to mandate “premium overtime pay” for farm employees after 10 hours of work in a day.

Unions not only want a bigger cut of farm worker pay, they think increased overtime is one way to accomplish this. But the real goal is to force desperate farmers into union contracts.

Nothing is ever as it seems. It’s not about the workers, it’s about helping the Democratic fundraising machine.

Sounds like they are trying to force farmers into automating.