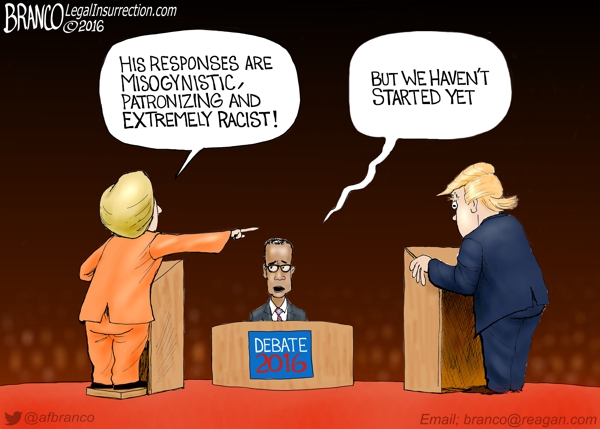 She should be standing on her box.

Everyone is a critic. BTW, that was my exact first thought.
TY Mr. Branco.

I meant it more as a suggestion than a criticism. Branco’s the best.

I should have put in a 🙂 Didn’t mean that seriously…

Which is what Mr. Branco said…knew I’d heard it somewhere.

On her back could be “Sponsored by George Soros and Saudi Arabia.”
Excellent Branco! May the LORD bless and keep you.

In addition, the foundation has been laid for her to call Trump a liar too.

If she goes with that too, she runs the risk of “it takes one to know one” being called on her.

So, pf course, the meme has already been instituted that she isn’t a liar.

So, the only change I would make to this excellent political cartoon would be to put her pants on fire also.

He is so misogynistic, patronizing, racist and deplorable that I went to his wedding!

Orange is her color!

Is that in reference to him first inviting and then disinviting Gennifer Flowers?

You’re easier to punk than the Hillary campaign.