And getting close to missile ready. 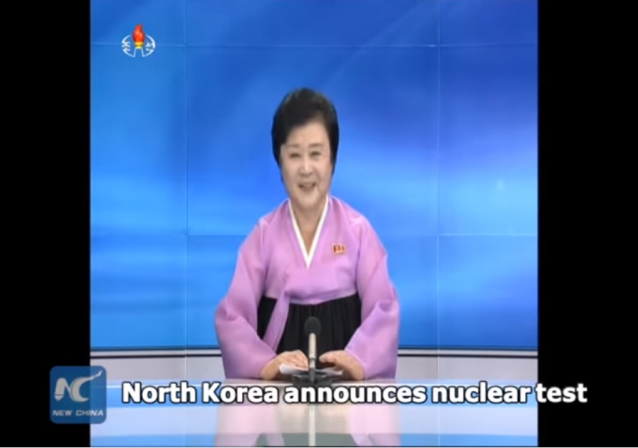 The hermit kingdom, which signed an agreement, ahem, not to develop nukes, just conducted it’s 5th nuclear test, the biggest yet. And “better” yet, a miniaturized version capable of fitting on a missile. Or so they say.

Who wants to bet that Iranian scientists were present to go to school on it?

(CNN)North Korea said it has hit the button on its fifth and potentially most powerful nuclear test Friday morning, claiming to have successfully tested a nuclear warhead.

State media said the warhead could be mounted on ballistic rockets and would enable North Korea to produce “a variety of smaller, lighter and diversified nuclear warheads of higher strike power.” …

South Korea, Japan and China condemned the test, saying it was a clear violation of the UN Security Council resolution.

“The only thing that Kim Jong Un regime can gain from the nuclear tests is stronger sanctions from the international community and its isolation. Such provocation will eventually hasten its path to self-destruction,” she said in a statement.

National security adviser Susan Rice briefed President Barack Obama about the situation, White House press secretary Josh Earnest told pool reporters aboard Air Force One on the US leader’s return trip from Asia. Earnest said the President spoke separately to South Korean and Japanese leaders by phone, reassuring them of “the unbreakable US commitment to the security of our allies in Asia and around the world.”

Seismic activity, with a magnitude of 5.3, was detected around 9 a.m. local time (8:30 p.m. ET) near Punggye-ri, Kilju County — the same location as four other tests, the most recent of which was in January.