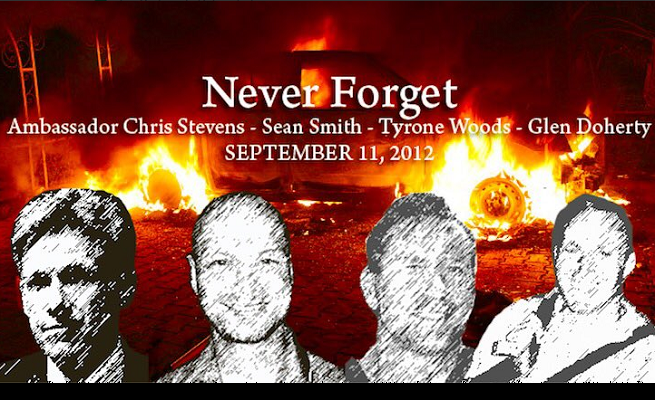 While we take time this day to remember each in our own way 9/11, we should note that this is also the fourth anniversary of the Benghazi attack that left four Americans dead:  Christopher Stevens, an American ambassador; Tyrone Woods and Glen Doherty, former Navy SEALS; Sean Smith, an embassy aide.

Hillary’s “basket full of deplorables” insult to millions of Americans is not going away.

You know what's #deplorable? Letting 4 Americans die in #Benghazi, ignoring hundreds of requests for help that day and in the months before!

This is a fact → No response team was ever activated during the #Benghazi terrorist attacks. https://t.co/8dQU4TJFJe #ObamaLegacy

As we mark the fourth anniversary of #Benghazi, we are reminded of the president's failed foreign policy legacy. https://t.co/8dQU4U1gAM

The movie 13 Hours was amazing. What the few defenders did to even come out alive was beyond heroic.
hilldog should be in a prison hospital ward.

Like the ‘Alex’ character in A Clockwork Orange, Hillary Clinton should be forced to watch this film until she goes insane.