At Vassar College, hosting a pro-Israel speaker still is controversial

At Vassar College, hosting a pro-Israel speaker still is controversial 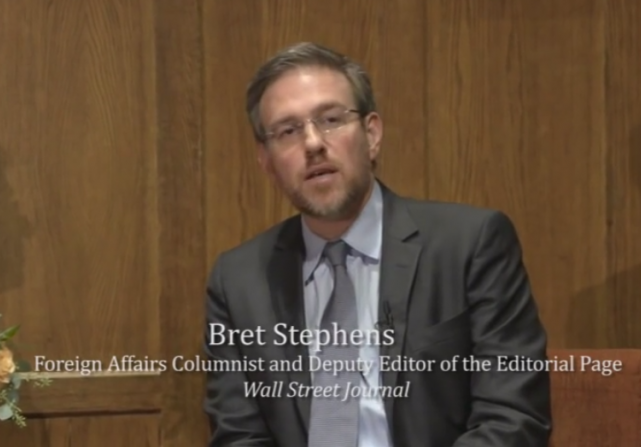 Vassar College in Poughkeepsie, NY, has had an abysmal few years when it comes to anti-Israel and sometimes antisemitic activity. You can scroll through our Vassar Tag for dozens of posts.

Here are a few of those posts that provide an overview:

When I appeared on campus in 2014 to challenge pro-BDS faculty to a debate, one of those faculty tried to organize a boycott of me!

The clear anti-Israel bias on campus from vocal faculty and aggressive students led to national attention and alumni uproar.

One of the ways the Vassar administration has attempted to deal with the situation is to bring some semblance of balance in public speakers by including pro-Israel speakers as part of a speakers series. While it certainly is not enough, at least the administration appears to recognize the problem and is taking some steps.

In that regard, as part of the series Wall Street Journal columnist Bret Stephens appeared on campus on September 20, 2016, and participated in a question and answer session titled “Why I support Israel and Why You Should Too.”

This pro-Israel appearance was a drop in a bucket of anti-Israel discourse on campus. Nonetheless, the student newspaper noted that the “arrival of a pro-Israel speaker on campus on Sept. 20 rapidly reignited students and faculty in the debate on the Israeli-Palestinian con­flict.”

According to Stephens’ statements in the discussion, there were threats by Vassar Students for Justice in Palestine to protest the event. It doesn’t appear that happened.  There was none of the stage-takeovers or shout-downs that have become the norm for SJP tactics around the country.

On Tuesday, September 20th Vassar’s “Dialogue and Engagement Across Differences Program” is hosting an interview between scholar David Cook and Wall Street Journal columnist Bret Stephens entitled “Why I Support Israel and You Should Too.” Stephens has a track record of racism, specifically Islamophobia, in addition to consistently justifying Israeli state violence and apartheid.

In an effort to challenge his xenophobic narrative, Students for Justice in Palestine (SJP) and Jewish Voice for Peace (JVP) will be partnering with Professor Joshua Schreier to host a talk-back this Thursday. We hope to create a space that allows for questions, opens up discussion between students and professors, and ultimately continues the conversation that began during David Cook and Bret Stephens’ discussion.

We encourage you to attend both events. Given that Tuesday’s talk is planned, paid for, and hosted by the Vassar administration, we need to be critical of what our institution sponsors.

We hope you’ll join us for our talk-back, this Thursday!

Schreier, who teaches an introductory course on the modern Middle East as well an intermediate course on the Israel-Palestine conflict,  apparently was so incensed that such a pro-Israel voice was heard on campus that he not only ran the counter-programming for students, he wrote an op-ed in the student newspaper accusing Stephens of “pinkwashing.”

Pinkwashing is the bizarre, demented theory advocated by anti-Israel activists that objects to Israel pointing out its positive LGBT record, particularly in contrast to the Arab and Islamic enemies of Israel. Schreier wrote, in part:

I urge fellow members of the Vassar commu­nity to reject Stephens’ exploitation of genuine concern for LGBTQ rights to attack SJP or JVP and defend Israel’s racist policies. His argument is a cynical effort to link support for LGBTQ rights to support for an oppressive and racist regime. It is disingenuous and harmful to Pales­tinians, LGBTQ individuals, or anyone hoping for true equality.

In my several years covering events at Vassar, I can’t recall any professor who is openly and vocally pro-Israel. Yet Schreier and dozens of other professors openly oppose Israel and support BDS. Much of the anti-Israel activism at Vassar and elsewhere is instigated by such faculty. That’s not going to change anytime soon.

[Note: wording of last paragraph changed after publication because prior wording apparently confused some people.]

I’ve admired and do admire your fight against antisemitism, Prof.

I’m a little surprised you haven’t taken up the full-tilt antisemitism exhibited by “Breitbart”.

“Breitbart in its current form is a sickening bastardization of its founder’s great vision, a disgrace to his memory. There is no doubt that Andrew Breitbart would never have let his good and honorable name be associated with such disgusting, demented Alt-Right filth.”
http://twitchy.com/sd-3133/2016/09/28/breitbart-news-blasted-for-disgusting-anti-semitic-attack-on-wapos-anne-applebaum/

If you’re in the process of investigating this, forgive my impatience.