“Show me your papers” now optional, other modifications 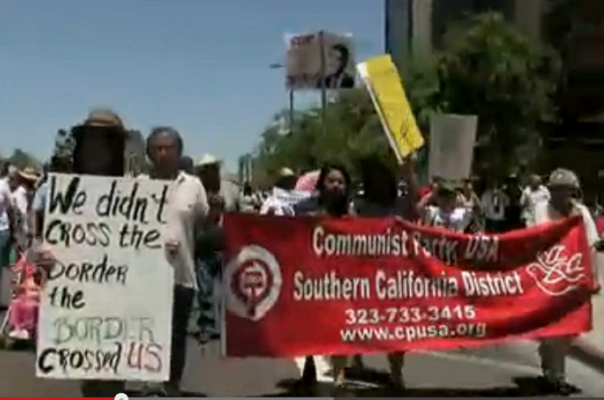 Here at LI, we’ve covered quite extensively Arizona’s controversial immigration law.  Erroneously deemed “racist,” the law resulted in wide-spread backlash from the left.  From boycotts that had potential to harm Arizona’s economy to silly boycotts that made no sense to a range of legal action, Arizona found itself in the national spotlight.

Obama’s remarks at the time include his telling his administration to “monitor the situation”:

After six years of litigation, Arizona has reached a settlement with various immigration rights groups.

Arizona ended six years of conflict over a controversial state immigration law when it announced a settlement with immigrant rights groups on Thursday.

As part of the settlement, Arizona Attorney General Mark Brnovich issued an informal opinion laying out guidelines for how to enforce the measure, known as SB 1070. The state will limit police officers’ powers to determine individuals’ immigration status, or detain them, over suspicions that they might be in the US illegally.

“Our goal while negotiating this settlement was to find a common-sense solution that protects Arizona taxpayers while helping our great state move forward,” said Arizona Attorney General Mark Brnovich, according to The Los Angeles Times.

. . . .  As part of the settlement, Brnovich issued a nonbinding opinion giving guidelines for the law’s enforcement: specifying that officers could not “prolong a stop, detention or arrest solely for the purpose of verifying immigration status,” and that they should not take race or nationality into account, unless as part of a suspect description. Police officers may still ask for papers, but are not required to, Brnovich wrote.

AILANational posted the following video about the settlement.

Um, yes. What has nationality got to do with the likelihood that a person has committed a crime?

Now you’re just kidding right? E.g. Norwegians vs Columbians. I won’t even look it up.

When a policeman stops someone, without a suspect description that the person resembles, what business has he got taking race, nationality, or any other such trait into account? Do you want cops stopping black people at random, just because black people commit so many crimes?!

Oh, and Columbians are people who attended a university in NY, such as our wonderful president man. Or people from a suburb of Washington.

Just cut to the chase and break into Kumbaya. Cops should have the discretion to stop someone based on criteria cooked down to demonstrate a propensity toward a specific crime, for immigration, say a bunch of Somalis suddenly showing up Palm Beach. You’re probably fine with 70 year old grandmothers getting pulled out of line at the airport to show “fairness”.

Cops have no business stopping anyone for immigration. Immigration is not a crime, and none of any cop’s f—ing business. If all they suspect a person of is having immigrated illegally then they have no right to stop him. The AZ law lets them check the immigration status of people they have already stopped for some other legitimate reason. Nationality is not a legitimate reason.

When a politician uses the words “common sense”, you can bet your backside it isn’t.

They can issue opinions/guidelines until the cows come home, the law still stands, it is not changed. Kind of like Obama’s opinion on “sex” in title 9.

“From boycotts that had potential to harm Arizona’s economy to silly boycotts that made no sense to a range of legal action, Arizona found itself in the national spotlight.”

Maybe it’s time we did the same thing in our states to those liberal states boycotting places like N. Carolina and other states with some laws they don’t like.
Imagine getting our legislatures to ban state employee travel or purchases against Cali, Mass, NJ etc if they won’t reciprocate on gun laws, bathroom laws or any other liberal agenda law our states disagree with.

“Settlement”. Translation: “capitulation”. Most of the illegals come up through the Tohono reservation, very remote country. So if the Border Patrol sees people hoofing through this desolated area they don’t have grounds to ask for papers?

Of course they do. Who on earth suggested they don’t? What connection do you imagine exists between this story and the Border Patrol?

The message in the agreement is that if law enforcement asks for papers the implication, or bia, is toward profiling, true? I was illustrating the ridiculousness of French tourists going to Tucson via the rawest part of the Sonoran desert.

What has this got to do with the Border Patrol, you idiot?

The Border Patrol is the first response enforcement arm for illegal immigration, you fuqing twerp.

So you haggle for a living and this is the best you can do? Just another troll.

Because in your own words Millhouse you said “When a policeman stops someone, without a suspect description that the person resembles, what business has he got taking race, nationality, or any other such trait into account? Do you want cops stopping black people at random, just because black people commit so many crimes?!”

Yes, I did. Now explain what the *** you think this has to do with the Border Patrol. Are you under the drug-addled delusion that the AZ legislature, or the AZ Attorney General, give orders to the Border Patrol?!

I sense that this “settlement” will leave a LOT of Police Officers twisting in the wind.

Any bets on just how fast one of these immigration groups is going to file suit against an officer individually as punishment for acting in conformance with the law, NOT be extending a stop due to lack of legal right to be present in the United States, but noting that they have ZERO identification, arresting the individual and THEN once they are jailed it’s determined that the individual is a criminal entrant to the United States of America.

My guess is that they’re going to try to make a “exceeding the scope of authority” (or some such) civil claim stick against the first Police Officer or Department with some assets in this as a punishment and way to get around police immunity.

Expect this to be in continued litigation for decades….

What is an informal opinion?
Does it have the force of law?
Can a new Arizona Attorney General trump Brnovich?
How can AG ignore the legislature and the people?
What kind of government do we have now? Legislation by opinion is the new “disparate impact”?

It is the opinion of the Attorney General, whose role it is to set state policy on law enforcement. In order to enforce any law he must, of course, have some view of what it means. This is what he has decided it means.

No, of course it doesn’t have the force of law; anyone is free to have a different view, and if it ever comes up they can take it to court.

Yes, of course a new AG can take a different view. Except, apparently, according to those who are kicking up a fuss because the MA AG has changed her view of her state’s gun laws. They seem to think that once an AG has expressed an opinion all future AGs are bound by it.

The AG can and must ignore the legislature and people, if he believes they have done something they have no right to do.

We have the same kind of government we have always had. Enforcers of law have had legal opinions, and acted on them, ever since there have been laws and those who enforce them.

Obama may enforce federal laws, but is not required to. That’s what this sounds like to me. Why did they give in the demands of people who aren’t even citizens and shouldn’t even be here.

What the **** do you imagine this story has to do with what Obama may or may not do?