Just because the panel discussion was ABOUT Benjamin Netanyahu. 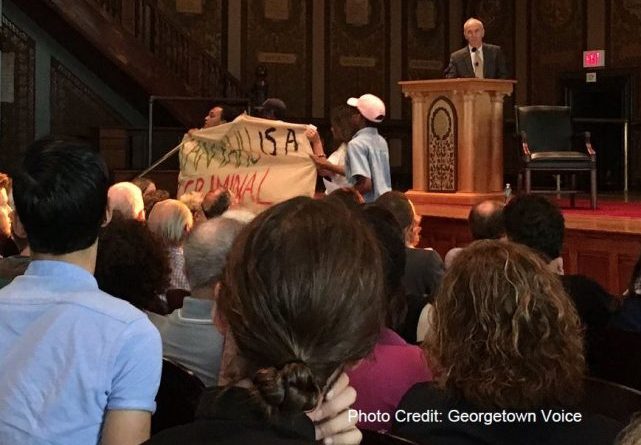 Disrupting Israeli, pro-Israel or even not sufficiently anti-Israel events and speakers has become the tactic of choice for anti-Israel students on campuses.

We have documented dozens of such disruptions. The goal is not only to disrupt the speech of others, but to keep campus speakers away by sending a message that they will be attacked and disrupted.

The semester is young, but already such a disruption has taken place, this time at Georgetown University, where a distinguished panel including Israeli historian Benny Morris and former U.S. negotiator Dennis Ross appeared on a panel about Benjamin Netanyahu’s career.

On Thursday [September 8, 2016], a group of students interrupted an event hosted by the Center for Jewish Civilization on Israeli Prime Minister Benjamin Netanyahu’s career in protest of the leader. The students held a banner that read “Netanyahu is a War Criminal” and chanted, “From the river to the sea, Palestine will be free.”

MacKenzie Foy (COL ‘19), Eman Abdelfadeel (COL ‘17), Hadley Masiel (COL ‘19), Christian Morris (COL ‘19), and Kendell Long (COL ‘19) walked to the front of Gaston Hall and in front of the stage holding the banner. Georgetown University Police Department (GUPD) officers immediately removed them from Gaston Hall, as event organizers informed them that they were in violation of the university’s Speech and Expression Policy.

“The panel is here to mislead you,” Abdelfadeel shouted. Other protesting students waited in line to ask the panelists questions regarding Israeli policy towards Palestine. GUPD officers took down the names of the students who approached the stage with the banner….

Khadija Khan (COL ‘17), one of the protesting students, asked why the panel included no Palestinians. “What is Georgetown meaning to say by the fact that there are four self-proclaimed Zionists sitting on the stage right now?” said Khan.

The demonstration occurred at the beginning of the question and answer time for the event, after Vance Vaughan (SFS ‘19) referred to Netanyahu’s policies toward Palestinians as imperial genocide. [Full disclosure: Vaughan is a former Voice staffer.] “Maybe the Palestinians want it to be genocide, but they never had the power to. The Israelis who had the power to were never genocidal“ said Benny Morris, panelist and government professor, before protesters began chanting.

A group of students interrupted a Center for Jewish Civilization event with a banner protesting Israel PM Netanyahu pic.twitter.com/OPEaM2aFJs

I have not been able to ascertain yet if the protesters were affiliated with a specific group.

This disruption takes the tactic to a new level. Netanyahu wasn’t even present. The disruption was because the protesters presumed the event would not be sufficiently critical. Of course, they didn’t wait to hear what was said, or ask questions of the panelists.

“…we provide students with a world-class learning experience focused on educating the whole person through exposure to different faiths, cultures and beliefs.” (from the university’s webpage)

I would ask how is it “world-class” when panel discussions cannot take place without interference from students who simply need to grow up and “get a life”?

This is a New Mode (since early 2000s) of Islamic terror tactics under the protective wings of the “most lucrative and enlightened academy in the whole world” bla bla bla.
The Islamic method of argue is these:- Do not investigate to get to the truth, you should everything from lies and rumors; Ask but not let the other to answer; shout your Lie and shut your ears to the Truth of the other; if the yelling is not helping your “truth” then throw objects to the floor, burn a flag on the cell, turn upside down some tables to show your ‘justice’ (I’m afraid that soon it might be a gun) and walk out shouting proudly some Islamic verses as if you’ve discovered a new world, or invented a cure for Alzheimer ….. but probably you have scared even the Alzheimer fearing from the brains of enemies of Israel, that have not protein in their empty minds to let the Alzheimer to eat and spread!