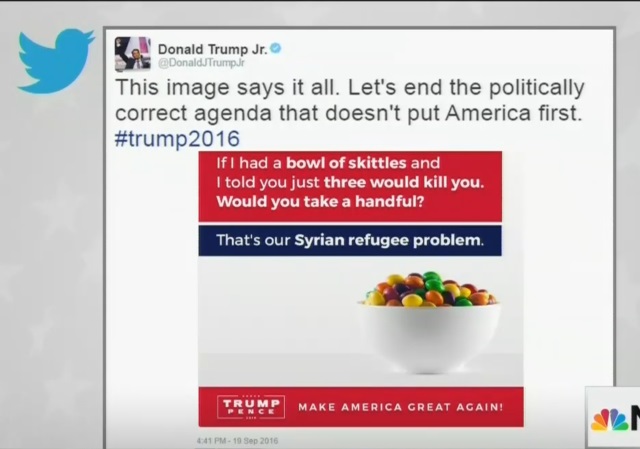 Andrea Mitchell has her unmentionables in major undulations over the fact that Donald Trump, Jr. posted a tweet analogizing terrorists hiding among bona fide refugees to a few poisonous Skittles in an otherwise okay bowl.

And so on her MSNBC show today, Mitchell teed up Dem Rep. Adam Schiff to take a big swing at the Trump campaign. Schiff was only too happy to oblige, piously denouncing Trump, Jr., whom he described as a “rotten apple” falling not far from the tree. Schiff accused Trump, Jr. of saying “essentially, children who are fleeing the war and violence are like poison candy.” The truth is that far from analogizing innocent children to poison candy, the point of the tweet was that terrorists would infiltrate themselves among the innocent to enter our country and wreak mayhem here.

Shame on Schiff, and on Mitchell for teeing him up to launch his despicable attack. Mitchell, seemingly overcome by her revulsion for Trump, went out of her way to emphasize that many of the Syrian refugees were children.

ANDREA MITCHELL: Any reaction to Donald Trump, Jr., tweeting out with the official logo of the campaign–so he wasn’t just copying an earlier tweet from a former congress member. But tweeting out that this is like Skittles. Comparing Syrian refugees, many of whom are children, to Skittles, the candy.

ADAM SCHIFF: Well you have to say, the apple doesn’t fall far from the tree. And this is a pretty rotten apple to say something like this, that essentially children fleeing the war and violence are like poison candy. I’m not sure what to make of it, except it’s just another in a string of incendiary statements coming out of the Trump candidate and the Trump campaign. And one I think we should all repudiate.

MITCHELL: Thank you so much.

And dems don’t fall far from the party li(n)e.

We couldn’t ask for a better ally than this dumb broad. No insult to broads. I like broads. The smart ones know who is who. They’re my kind of broads.

By attacking him they make his point over and over. Thanks MSM.

They must have missed middle school the day they taught analogies.

What really throws me is that Schiff, a Jew who has probably been to Europe once or twice, pretends not to realize what Muslim immigration means to his co-religionists, gays, women, and anyone else who prefers to live as they please.

how many syrian refugees are males between the age of 16-35 – About 70% – take a guess how many are really refugees.

Didn’t we just see an attack in Israel by a 12-year-old?

Seriously, nobody misunderstood the original tweet, if they read it, instead of what these jokers said he wrote.

Put this article in a time capsule and if there is anybody left in the Mad Max dystopia 25 years hence have them read it. The left is in the throes of a mass psychosis similar to the ergot poisonings in the middle ages.
http://www.hollywoodreporter.com/news/donald-trump-jr-skittles-responds-to-syrian-refugees-analogy-930917

The “poison candy” argument is used in self-defense circles, as an analogy showing that the practice of carrying concealed firearms benefits everyone even if only a relatively small part of the population does it, and that “Gun-Free Zones” are a terrible idea.

It goes like this: Imagine two bowls of Skittles (or M&Ms, or jelly beans, etc.). They are fresh from the package and look delicious, and you’d like to take a few. Now imagine I tell you that the bowl on the left contains entirely fresh, normal candy, while in the bowl on the right, ~1% of the candies have been laced with a deadly poison.

Which bowl would you take from?

I see no reason our immigration policy can’t take the same stance. If the infrastructure exists in their home nation and we can properly vet them — read: verify none of the candy is poisoned — then there’s no problem taking from that bowl. If we can’t vet them, then we’re taking our chances with a potentially tainted bowl. If we let in 10,000 “refugees” and even 0.1% are jihadis, that’s 10 jihadis we’re welcoming in with open arms.

The question is, who’s doing the risk analysis on our immigration policies? Anyone? Bueller?