Why Is This Mook Laughing?

Why Is This Mook Laughing? 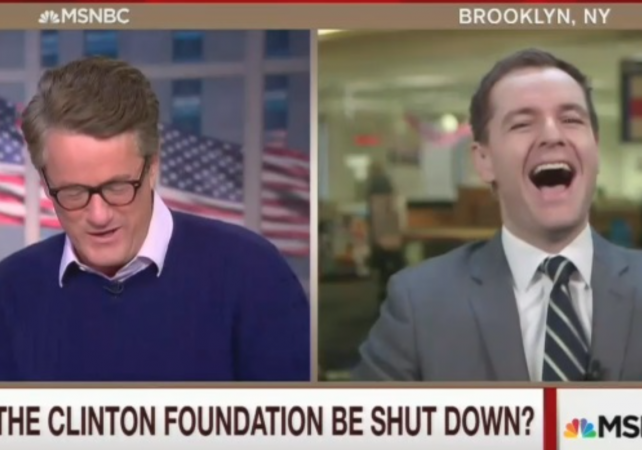 On arguably the worst day of Hillary Clinton’s campaign, her campaign manager Robby Mook never stopped laughing and grinning through his Morning Joe appearance. The AP has reported that more than half of the meetings Hillary had as Secretary of State with non-governmental representatives were with people who had donated to the Foundation. But in what was clearly a grinning-past-the-graveyard strategy, there was Mook laughing like he had just won the lottery. And when he wasn’t actively laughing, Mook kept a smile resolutely plastered in place.

Mook displayed encyclopedic knowledge of all facts favorable to Clinton. But when it came to something that might harm her, Robby suddenly pleaded ignorance. Joe Scarborough asked whether it was true that when Doug Band of the Foundation was sending Huma Abedin emails asking for meetings on behalf of donors to the Foundation, he was also the head of the Teneo firm at a time Huma was on the Teneo payroll, effectively making Band Abedin’s boss. “I, I don’t, I don’t know the details of, you know, what was going on in her life,” stammered Mook. Isn’t that convenient?

Here’s the transcript of the portion of Mook’s appearance in which, when it comes to Doug Band being Huma’s boss at the time he was sending her requests at the State Department, Mook’s voluminous knowledge suddenly fails him.

JOE SCARBOROUGH: I wanted to ask you, we’ve been talking about the emails between Doug Band and Huma. If I’m not mistaken, Huma was on the payroll of Teneo while she was getting those e-mails. Doug Band was the boss at Teneo when he was sending those emails. Bill Clinton was getting money, getting paid from Teneo when those emails were being sent. Would it be accurate to say that when Doug Band was sending those emails asking for access, that just wasn’t coming from the Foundation, that was actually coming from her boss? I’ve heard people characterize it that way. Is that correct?

ROBBY MOOK: No, look, Huma Abedin is a total professional. And when you look at some of these emails you see her sometimes saying, no. That’s just not something that’s going to happen.

JOE: I understand. I’m just asking about her relationships. Was she on the payroll of Teneo while Doug Band was the principal at Teneo making these requests?

MOOK: I, I don’t, I don’t know the details of, you know, what was going on in her life.

What a coincidence that the state department stonewalled the release of HRC’s appointment records for 3 years, until just after she locked up the nomination.

Are you suggesting the election’s rigged?

I think I’m going to faint!

I need my blue blanket!

P-rags ; Leader of the flock.

Mm- Is she really going out with him?
Well there she is, let’s ask her.
(insert name) Is that P-rags ring you’re wearing?
Mm-hm
Gee, it must be great riding with him,
Is he picking you up after school today?
Mm-mm
By the way, where did you meet him?

I met him at the candy store!
He turned around & smiled at me –
You get the picture?
Yes we see — ;
That’s when I fell for,
Choir- LEADER OF THE FLOCK!

Teneo, isn’t that where Bratton is going to work after leaving NYCPD commissioner. ?

Why, yes – yes it is. As such, he’ll have close contact with many businesses and foundations. Hmmm … foundations. Just a coincidence; move along, nothing to see here.

“I, I don’t, I don’t know the details of, you know, what was going on in her life,” stammered Mook.

But he knows, knows to a certainty, that Donald Trump is an agent of Putin.

—–
“There’s a web of financial interests that have not been disclosed,” he said. “And there are real questions being raised about whether Donald Trump himself is just a puppet for the Kremlin in this race.”

Mook cautioned that the Russian government is still at the “core” of Trump’s campaign, and went on to accuse Trump of “parroting” remarks made by Russian President Vladimir Putin.

Why is Mook laughing…???

Maybe this would provide at least a partial explanation…

Parrot heads
Your leader is weak ;
He clutches at a poll that notoriously changed its methodology last week that had shown a Trump advantage & thereby showed a result that favored his candidate Hillary Clinton. He must be punished. Down vote for P-rags.
Heh.

I suggested that the polling would provide Mook a reason to smile.

It isn’t my poll, and I’m not “clutching” it. It exists, and the reality can’t be denied, although T-rump sucking cultists will find it necessary to deny reality.

It’s basic to being Collectivists.

Well, . . .you are a “mook”, I’m only making the logical extension.
You left out the full title qualifier, “Why is this Mook laughing?”, which open’s the probability you’re talking about yourself.

Kinda reminds me of the performance Drunken Uncle Joe gave in the VP debate against Ryan. Typical Dim BS… they display a complete and utter lack of respect for the intelligence of their constituents… they lie, obfuscate, stone-wall, bald-faced-lie some more and then laugh in your face about it. This is why I could never be a politician, I would smash that puke’s face like a melon.

He is laughing because he knows that Hillary Clinton is above the law and the rank and file Democrats are okay with it.

And it doesn’t matter to Deemocrats.

Yippie Skippie, that’s why is so important for the #NeverTrumpers to make sure that Trump doesn’t win! Yippie, that means that Rags favored Politico wins the Presidency as the second member of the Clinton Crime Family to hold that office.

Which provides Rags a minimum of four more years dumping on his favored political party. Plus, Cruzites can start to work, mightily, on promoting T. “You can take that to the bank” Cruz, to head the ticket of the GOPe coven.

Plus: Trump loses and that means that Rags will work to cleanse the rank and file from the GOP; leave that party to the Cruzites and other GOPe members.

Oh, joy, purity of political soul, where only Rags views are allowed. Actually, Rags is the Queen of Hearts in disguise; the only description of him that makes sense.

Just because I love screwing with you, I’ll play with this…

“Cruzites can start to work, mightily, on promoting T. “You can take that to the bank” Cruz, to head the ticket of the GOPe coven.”

You are an idiot.

Example: Cruz has taken a principled stand. How’s that working out with the GOPe, mow-ron. Is he loved and adored? Respected?

If you had the reasoning capacity of a fruit fly, you’d never make such thumpingly stupid statements.

I don’t give a good fluck about which Collectivist puke wins.

After realizing that, there’s nothing to consider.

With either, the republic is screwed. The Constitution is toilet paper. Limited government is out the window. And character does NOT matter. Nothing either of them says is worth a shit.

Parrot heads ;
Thanks to Doug Wright, you now have your chorus ; all together now,
Repeat what your Flock Leader laid out just above ;

Now we’ve determined that there are at least 9 of you,
so do it out loud N proud ; In Gregorian Chant style ~~~~

Ahh. Secondwind has made his foul presence known. Or is that fowl, given his fascination with parrots.

I’m still waiting for my damn cheese and wine to go along with the cracker you offered me. Get on with it.

Oh, wait, that’s right. Secondwind is just another collectivist that promises things then fails to deliver. Have fun with that promised-land of Utopia.

As before: Your flamefu is weak, and your posts add nothing of substance. We’re laughing AT you, when we’re not sighing at the fact that we have to read yet another poorly considered, tedious flame attempt. You are hereby downgraded from the Court Idiot to the Village Idiot.

Consider taking a save the country approach and try to retain as much of our Republic as can be saved; vote for the least harmful of the bunch.

One of the two main candidates, and you despise both, will win this Fall and if Hillary, she will complete Obama’s tear down project. If you really don’t factor that, then do go ahead with your Texit 2018 path to destruction project.

You’re a fool, just like the Queen of Hearts.

So true. The Dems will always fall in line to support their candidate, no matter what. Why, I imagine they would still do that even if they chose a candidate that was a liar, a cheat, a possible conspirator in multiple murders, a Constitution-hater, a … oh, wait.