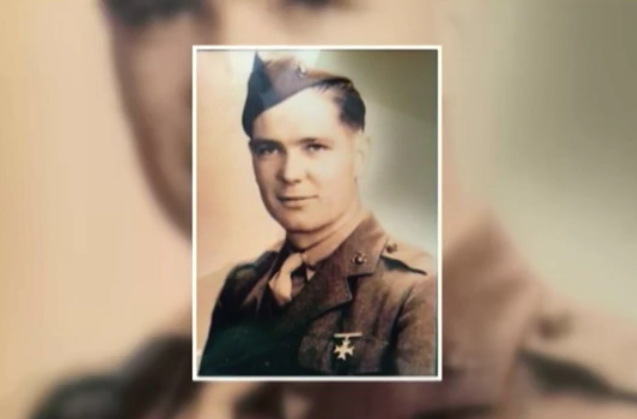 I’d be surprised if any time is taken out from studying social justice warfare for school children or even college students to study the history of WWII other than to denounce the U.S. for dropping the A-bomb.

So the Battle of Tarawa atoll likely means nothing to them. But to the generation that fought WWII and their relatives, and those of us who actually were taught history in school, the term Bloody Tarawa is bone chilling:

Most of the Americans killed were gunned down on the beaches during the amphibious landing: 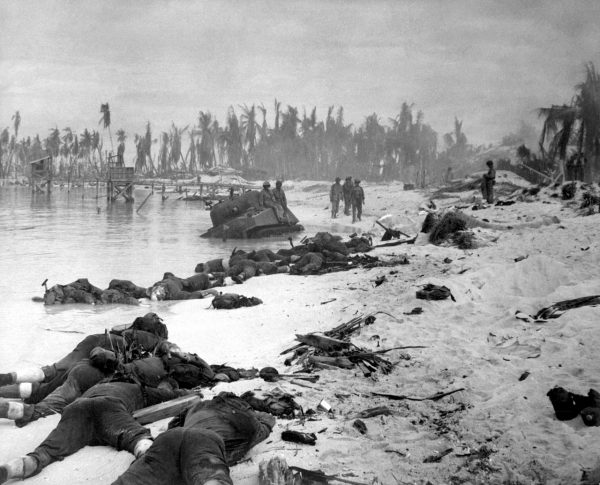 Here is one hero’s recollection of the battle:

When you consider the human cost on both sides to liberate just one tiny atoll, it puts the decision to use the A-bomb to end the war in perspective. But if you never learned about Bloody Tarawa, or any of the hundreds of similar battles, it’s easy to be judgmental.

George Traver was one of the Marines killed on Bloody Tarawa. His remains were never found. Until recently. Associated Press reports:

The remains of a U.S. Marine killed in a World War II Pacific battle nearly 73 years ago have been identified and will be returned to upstate New York for burial.

The Times Union of Albany reports military officials identified Pfc. George Traver using dental records and his Boy Scout pocket knife, found with his buried remains on the island of Tarawa. The 25-year-old from Chatham in Columbia County was killed when Marines landed on the heavily defended Japanese-held atoll in November 1943.

His remains were among those of 35 fallen Marines discovered in May 2015 by the Florida-based group History Flight.

A flight carrying Traver’s remains is scheduled to arrive in Albany Aug. 26. He’ll be buried two days later next to his mother’s grave in Chatham.

NBC13 in Albany (NY) adds details as to how the family learned the news:

A family is getting set to plan a funeral for a loved-one killed in a battle in the Pacific during World War II. It’s actually the second time they planned a funeral. The first one – in 1944 – was called off when the remains of George Traver were not found. This time, they have been and will be delivered on Friday, August 26, to Albany International Airport.

“This is for all the other families that have lost their men and stuff,” said George Traver, nephew of the late PFC George Traver. “And I think if my uncle was here he’d say the same thing.”

George Traver, the Marine, joined up just a few weeks after the bombing at Pearl Harbor. He was hurt in Guadalcanal and sent that Purple Heart to his girlfriend, Marge, writing in a letter to his mother.

“He wrote to my grandmother and said I received the purple heart and I’m sending it to Marge to put in our war collectibles,” said his nephew.

The second Purple Heart came after he was killed, November 20, 1943, part of the first wave of Marines on Betio Island of Tarawa in the Pacific. More than 1,000 Marines died in those days. His nephew David Silliman went to several meetings to learn about missing soldiers and in May, a Marine assigned to his case told him “we identified your uncle in February. Wow. All these years. Growing up as little kids, old enough to think, I started thinking about my uncle. And then later on, well, why can’t we bring him home?”

Generations of Marines have held that generation in awe and will forever. They are the yardstick with which to measure heroism.

“Nimitz launched the Marshalls campaign 10 weeks after the seizure of Tarawa. Aircraft flown from airfields at Betio and Apamama proved highly valuable, but the greater significance of the action on Tarawa to the success in the Marshalls proved to be the lessons learned from the battle itself.

“The losses at Tarawa resulted from contributing factors, among which were the miscalculation of the tide and the height of the obstructing coral reefs, the operational shortcomings of the landing craft available, the inability of the naval bombardment to weaken the defenses of a well entrenched enemy, and the difficulties of coordinating and communicating between the different forces involved. It was the first time in the war that a United States amphibious landing was opposed by well entrenched, determined defenders. Previous landings, such as the landing at Guadalcanal, had been unexpected and met with little or no initial resistance. At the time, Tarawa was the most heavily defended atoll invaded by Allied forces in the Pacific.

“All told, nearly 6,400 Japanese, Koreans and Americans died on the tiny island in 76 hours of fighting.[4] In the aftermath of the battle, American casualties lined the beach and floated in the surf. Staff Sgt Norman T. Hatch and other Marine cameramen were present obtaining footage that would later be used in a documentary. With the Marines at Tarawa contained scenes of American dead so disturbing that the decision of whether or not to release it to the public was deferred to President Franklin Delano Roosevelt.

“The lessons learned at Tarawa would be applied to all subsequent amphibious assaults as the United States worked its way across the Central Pacific. Said War Correspondent Robert Sherrod:

Last week some 2,000 or 3,000 United States Marines, most of them now dead or wounded, gave the nation a name to stand beside those of Concord Bridge, the Bonhomme Richard, the Alamo, Little Bighorn, and Belleau Wood. The name was Tarawa.”
https://en.wikipedia.org/wiki/Battle_of_Tarawa

Imagine any one of the 3,000 marines that died able to see the pathetic state of our society and corruption of our political and media systems: then ask them if they would they do it again.

I think they would. Do it again, that is. Of the ones I knew I believe that they would say that as bad as things are now had they no done what they did matters would be so much worse.

Agree – U.S. Marines are great people. Each one of their lives has ten times the value of 90% of the s-bags in Congress. Next time it is contemplated sending 3,000 Marines to their demise, we should first send in a group of 3,000 democrats, hollywood actors, leftist media hacks and rinos.

My family lives peacefully because of heroes like Pfc. Traver.

RIP Pfc. Traver and thank you.

“If the Army and the Navy
Ever look on Heaven’s scenes;
They will find the streets are guarded
By United States Marines.”

My great uncle, a WWI Navy Aviator, was the CO of an Navy airbase built on on Betio Island after the marines captured it. I found a photo on the internet of him presiding over a memorial service for our dead on the one year anniversary. Such huge cost in lives must have driven the survivors to “get it done.” I never knew that part of his service record until I stumbled upon it on the internet.

This one came home just this week to a small town near me. I missed his arrival in town by 20 minutes.

World War II airman’s remains to be buried in Tipton

TIPTON, Ind. (AP) — Federal officials say the remains of an Indiana airman who went missing during World War II will be buried in Indiana.

The Defense POW/MIA Accounting Agency says 21-year-old Army Air Forces 1st Lt. Robert L. McIntosh of Tipton will be buried in his hometown Saturday. The agency says McIntosh was piloting a single-seat aircraft on a mission in Italy on May 12, 1944, when he disappeared.

A visitation will be Saturday at Tipton High School followed by burial at Fairview Cemetery in Tipton.

Eternal Father, grant, we pray,
To all Marines, both night and day,
The courage, honor, strength, and skill
Their land to serve, thy law fulfill;
Be thou the shield forevermore
From every peril to the Corps.