Washington Post’s Robinson: I Feel I Need to Act Like Obama ‘Defense Attorney’ on Iran Ransom

Washington Post’s Robinson: I Feel I Need to Act Like Obama ‘Defense Attorney’ on Iran Ransom 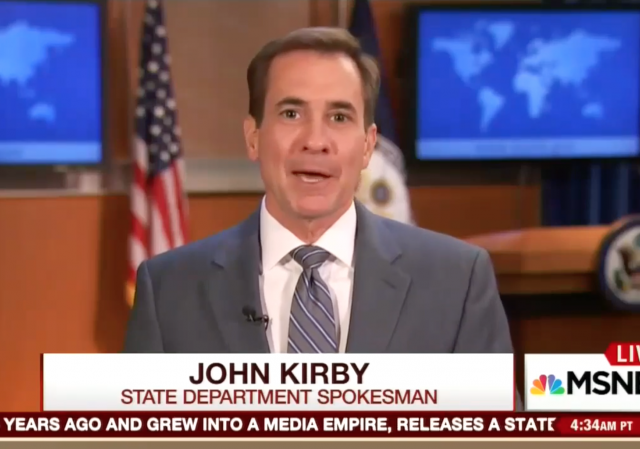 On a certain level, it was refreshing to see an MSM member admit how he sees his role: as that of a “defense attorney” for Barack Obama. On another level, it was disgusting . . . On today’s Morning Joe, during a discussion of the Iran ransom deal in which even State Department spokesman John Kirby effectively conceded that the deal was a “quid pro quo,” the Washington Post‘s Eugene Robinson said “I feel like I need to ask the sort of question a defense attorney would ask at this point.”

Robinson’s point was that some had criticized the Obama admin for not obtaining the release of the hostages as part of the Iran nuclear deal. But no one ever suggested that the US pay ransom for the hostages, as President Obama untruthfully denied doing. The notion was that the US should not agree to the deal unless the hostages were released. But that didn’t stop Robinson from going all Perry Mason on behalf of the president.

Stunningly, Kirby didn’t even try to defend President Obama’s lies. When Scarborough asked why President Obama couldn’t have laid out the facts clearly instead of “not telling the truth” to the American people, Kirby could only respond “I can’t speak for everything that was said previous to today.”

Laugh line: Kirby, repeating a talking point I’ve heard other Obama admin defenders spout, said that the ransom deal saved money for the “American taxpayers.”  Ah yes, Barack Obama: great defender of the American taxpayer . . . as he runs the national debt up to $20 trillion, and in which the “savings” from the ransom deal wouldn’t amount to a rounding error on a rounding error.

JOE SCARBOROUGH: Okay, come on, this was a quid pro quo, Admiral. It was clearly cash for hostages, was it not?

JOHN KIRBY: Well, look, Joe, let me just walk through a couple of things here. First of all, this was Iran’s money. Okay? It was money that they were going to get back anyway and so we negotiated in the Hague this interest payment that was much more advantageous to American taxpayers. So to the degree there was a quid pro quo, it was they got their principal back and we got a much more advantageous interest payment schedule.

JOE: Why didn’t the president just say that several weeks ago instead of not telling the truth to the American people and being very dismissive of the Washington press corps?

KIRBY: Well look, I can’t speak for everything that was said previous to today
. . .

EUGENE ROBINSON: I feel like I need to ask the sort of question a defense attorney would ask at this point. So John, is it not true that at the time the Iran deal was negotiated, there was a lot of criticism, including on this show, from some people of the deal because —

JOE: — objection. Counsel, you can’t lead your own witness.

ROBINSON: — because it did not get our Americans released. Is that not true?

Eugene Robinson has been tying himself into knots defending the the current administration for years. This comment is telling, and a clear admission that, even in his view, the administration’s statement is weak.

Well, if you didn’t have such a lying sack-of-crap as a “client”, you might not have to be defending him so much.

And if Robinson wasn’t wasn’t such a lying sack-of-crap of a “reporter”, he wouldn’t have a “client” to begin with.

I wonder if this clown is a member of the Society of Professional Journalists. Principle Three from their Code of Ethics:

The media should be bashed over the head with this, repeatedly, until they stop shilling for Socialism.

Fat chance of that. This isn’t about “journalism” anymore, it’s about the battle for our way of life: snd “journalists” like this paid a-hole Robinson are on the other side.