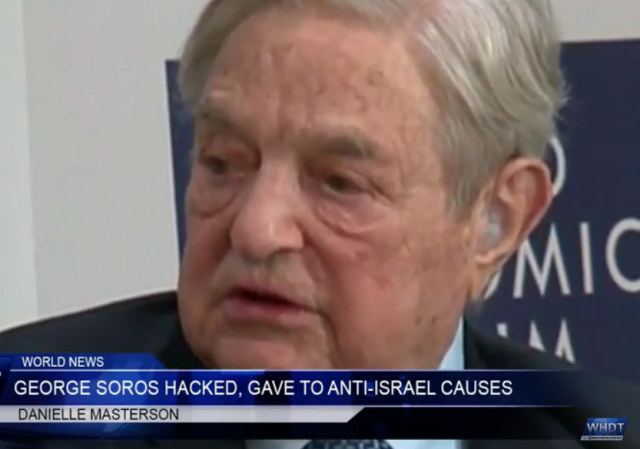 One of the mysteries of the anti-Israel “non-governmental organization” (NGO) movement is the sources of funding.

NGO Monitor has done a great job tracking some of the funding particularly for Israeli NGOs, and groups involved in the BDS movement, such as Jewish Voice for Peace.

In 2013, NGO Monitor also explored (pdf.) the role of George Soros’ foundations, including the Open Society Foundations, in funding a wide range of anti-Israel NGOs.

A recent hack of the Open Society Foundations, sheds even more light with documentary evidence of a Soros-funded anti-Israel ecosystem feeding off each other to delegitimize Israel.

The Jewish Press reported on the circular nature of the funding. Soros funds groups directly, and other groups that fund other groups. He created an anti-Israel ecosystem:

Jewish Hungarian-American business magnate George Soros, whose company files were hacked by the same outfit that in June hacked the DNC computers, was a major contributor to anti-Israel and anti-Zionist causes, as appears from an archive of leaked documents of the DC Leaks website…

The list of groups hostile to Zionism and to the Jewish State that received funds from Soros is very long:

Adalah – The Legal Center for Arab Minority Rights in Israel, received a $400,000 grant in 2014-15 and 14 additional grants since 2001 totaling $2,688,561. The recently released document under the banner of the Movement for Black Lives, labeling Israel as an “apartheid state” and accusing Israel of committing “genocide” against Arabs, is the handiwork of Nadia Ben-Youssef, Adalah’s US representative, which the document lists as an “author and contributor.”

Incidentally, according to NGO Monitor, Adalah’s promotion of BDS directly contravenes the stated policies of its funder, the New Israel Fund (NIF). NIF’s position on BDS states that it “will not fund global BDS activities against Israel nor support organizations that have global BDS programs.” Nevertheless, from 2008-2015, NIF donated $1,975,826 to Adalah.

And, lo and behold, NIF is also listed as a recipient of Soros’ support, 9 grants totaling $837,500 since 2009. One of these grants, for $60,000, was given in 2015 to the Herman Schwartz Human Rights Law Fellowship, to “strengthen the capacities of young Palestinian legal professionals in legal advocacy by undertaking an LL.M. degree in human rights law in the US along with internships opportunities in Israel.”

The Adalah connection is particularly significant because the recent Black Lives Matter anti-Israel platform uses phony claims by Adalah as to supposedly discriminatory Israeli laws. Soros has been a major funder of Black Lives Matter groups.

Adalah was cited as a contributing organization in the now-notorious platform of theMovement for Black Lives. Among its other problematic statements, the platform says that Israel practices “systematic discrimination,” a statement that likely is based on Adalah’s database.

The “discriminatory laws database” is, of course, a complete crock. For example, it counts as discriminatory a law that allows the withholding of state funds from organizations that conduct an “activity that rejects the existence of Israel as a ‘Jewish and democratic state’ or commemorates ‘Israel’s Independence Day or the day on which the state was established as a day of mourning.’”

Both NGO Monitor and The Institute for Zionist Strategies have debunked the database. IZS did so more recently in a 62-page report in Hebrew. Algemeiner reports that IZS gave as examples of laws that Adalah claims are discriminatory,

The Law and Administration Ordinance, which defines the country’s official days of rest, and the Law for Using the Hebrew Date, both of which are included in Adalah’s list. According to IZS, both “explicitly exclude institutions and authorities that serve non-Jewish populations for whom the law provides for definitions and procedures appropriate for their specific needs.”

Another example is the Israeli flag, which Adalah claims is a discriminatory symbol, due to its depiction of a Jewish Star of David. IZS says that, applied elsewhere, this claim does not stand up to scrutiny. “This reasoning would mean that any country, the flag of which bears a cross or crescent discriminates against its non-Christian or non-Muslim minorities,” it wrote.

So, not forcing non-Jewish institutions to close of Shabbat is considered by Adalah to be discriminatory.

So understand the Soros-funded anti-Israel circle: Soros funds groups that make false claims against Israel. Those false claims are used by other groups funded by Soros.

Yet there was no disclosure of the common Soros connection, and Soros went to great effort to keep Soros’ involvement secret, as Liel Liebovitz at The Tablet explained:

Even more troubling, the documents repeatedly indicate that the network actively tried to conceal its engagements in Israel and the Palestinian territories, and has worked to set up an extensive network of organizations designed to support and promote its views. “For a variety of reasons,” reads the report, “we wanted to construct a diversified portfolio of grants dealing with Israel and Palestine, funding both Israeli Jewish and PCI (Palestinian Citizens of Israel) groups as well as building a portfolio of Palestinian grants and in all cases to maintain a low profile and relative distance—particularly on the advocacy front.”…

The Soros network, the report shows, has also been methodical about supporting a diverse number of groups in Israel, the West Bank, and Gaza, creating a web of small organizations supporting each other’s goals in the media, vis-à-vis foreign governments, and elsewhere. This, traditionally, is how an echo chamber works: by creating an enclosed system of like-minded partisans that appears sufficiently diverse in scope, it is often able to amplify its messages and lend them credibility. A number of the Soros-funded organizations, for example, including Adalah and others, have been key in promoting the false accusation that the Israel Defense Forces wantonly massacred innocent Palestinian civilians in Jenin in 2002. Coming from a plethora of well-funded Israeli and Palestinian NGOs, all geared exclusively towards communicating with European and American government and lobbying groups, these false accusations were reported extensively in the international media and were widely considered factually true.

Here is a list of groups funded by Soros through the Open Society Foundations (click to enlarge): 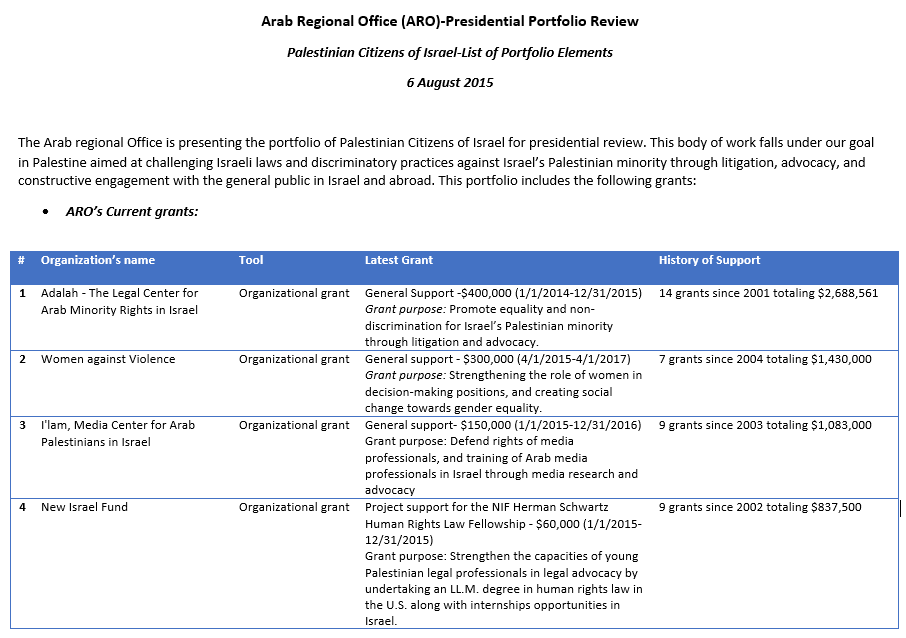 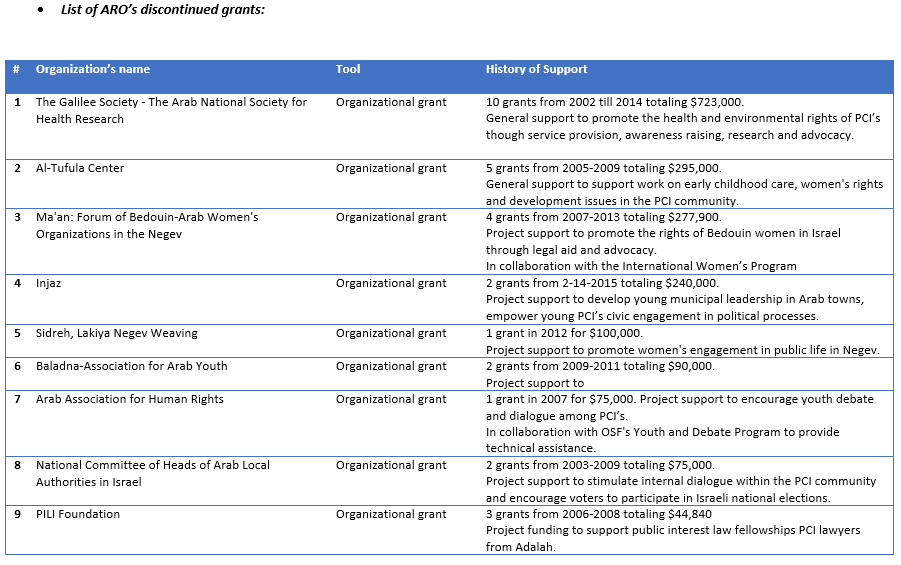 Why, I do love irony.

Loving the call out of the irony, nice!

The BDS movement, Jewish Voice for Peace and the like will only grow stronger, more emboldened and radical under President Clinton; but, Legal Insurrection will continue with the #Never Trump crusade regardless.

It doesn’t matter what the posting subject is, you inject “Trump”.

Put a cork in it!

I can bet that many other readers are just as tired of it.

A) That was about my 4th post here on Legal Insurrection. So your claim that I inject “Trump” regardless of the posting subject is not based in reality.

B) This posting subject is critically dependent on the results of the 2016 U.S. Presidential Election; thus, Trump is relevant.

C) Blow it out your ear!

He’s a literal Nazi. Once a nazi collaborating Judenrat, always one.

All his charities do is push hate and dissent so that Soros’ investment funds profit when the countries targeted by the charities collapse. Putin’s put him on the terror watch list and other countries ought to follow suit.

This guy funds violent thugs who intimidate thru violence in order to influence our politics. Isn’t that the definition of terrorism? The prick needs to be droned.

How, oh how, I would love to know what really motivates Soros. WHAT is his issue? I don’t believe anything that comes out of his mouth, but where his money goes, all tends to the destruction of western civilization as we know it.

He will be part of the global ruling elite if the free societies are gone. Money is not enough power because other people also have money. Absolute power has always been the dream of evil people.

You can see why lefties were so outraged by Israels moves to force NGO’s to identify their sources of funding. It threatens their core activities to the bone (delegitimising Israel) and is therefore a threat to their very existences.

I wish you had included the context of where Soros is coming from. There must be some reading this post who don’t know about his “adventure” in Hungary diring WWII.
One should also mention that Soros has been a proponent for World Governance.
He also did much damage to bank of England and Indonesia with his currency manipulations and that he was fined, by France, for insider trading, this megalomaniac “philanthropist”.

In the list of discontinued grants, #3 is a joke, as promoting the rights of Bedouin women with the legal aid and advocacy conflicts with their culture where the husband or father rule beneath the the clan’s edicts.
There is as much taqiyya in the reasons given for the support as in Arab relationships with the infidel.

I should have added, that one can imagine the scream of outrage from the world if an Israeli court ruled against the kfar or husband.
Discrimination of Arab culture and customs.

I don’t understand how Soros, as a Jew, hates Israel so much, and works for Israel’s delegitimacy and destruction. How can someone turn on his own people like that and become such a Judas (worse than Judas, actually)? What has happened to him, or what is there in his background, to turn him into such a hater? Does anyone have a good answer?

The most evil man in the world or very close to it. His funding of BLM and Hillary’s catering to BLM makes you really wonder about her plans for the US. Any one other then her, #neverhillary get behind a candidate and drag them over the finish line.

Where is Mossad when you need them?

One should look into the relationship of the Clintons with Soros funded Media Matters.