Officials have called the suicide bombing a terrorist attack. 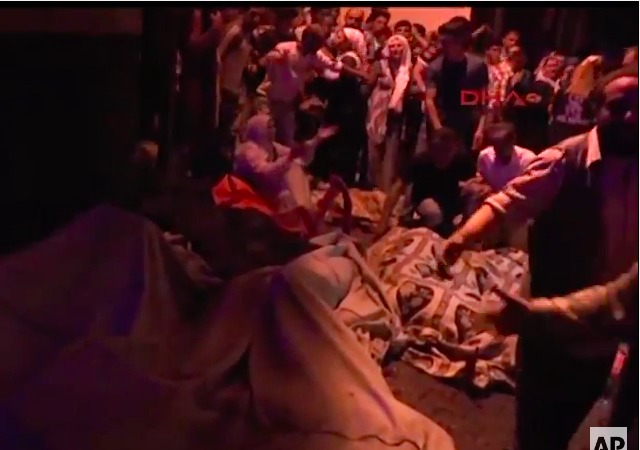 Turkish President Recep Tayyip Erdogan said a suicide bomber aged between 12-14 murdered 51 people at a wedding late Saturday night in Gazientep, which is located only 60 miles north of Aleppo, Syria. He also said the authorities believe the Islamic State was behind the terrorist attack:

“The initial findings of the governor and our police forces indicate the attack has been perpetrated by Daesh,” said Erdogan, using another term for the terror group.

Mahmut Tagrul, lawmaker with the Kurdish Peoples’ Democratic Party, said the majority “of the victims that died were children.”

However, no terrorist group has claimed responsibility for the terrorist attack.

CNN reports that the blast injured 69 and 17 remain in critical condition. The bride and groom are among those injured. Authorities scoured the scene after it happened:

Officials have found pieces of a detonated suicide vest at the scene, the agency reported. Witnesses to the blast described horrific scenes to Anadolu, with one telling the agency that body parts were strewn across the bomb site.

“We couldn’t see anything. Nothing but body parts,” Sukru Akdogan, the groom’s brother, told Anadolu.

More than 200 people had packed onto a narrow street in the district of Sahinbey, close to the Syrian border, for the Kurdish wedding when the explosion occurred around 11 p.m., witnesses said.

“We had just walked past the wedding and offered our good wishes when we heard the blast,” said Ibrahim Ates, who lives in the area. “Suddenly people started running past us. When we went back to see what had happened, everyone was on the floor, and there were body parts scattered everywhere and blood splattered on the walls.”

A child's shoe is seen in the debris of a bomb attack on a wedding party in #Gaziantep, southeastern Turkey pic.twitter.com/91qtso8tFM

The Gaziantep governor’s office told the media the bombing took place at 10:50PM as people at the wedding took to the streets to continue their celebration. Local journalist Mehmet Tascioglu said “that the huge explosion could be heard in may parts of the city.”

At least 22 people are killed and dozens more wounded in attack on wedding party in Turkey https://t.co/67ONBgMJZe pic.twitter.com/y6zYsFLU5r

Suicide bomber as young as 12 behind attack at Turkey wedding that left 51 dead https://t.co/kbq0syq7TP pic.twitter.com/ny4Bbeiapz

Family members and friends began funerals for the victims on Sunday. Unfortunately, they could not bury all of them:

“Everyone here is devastated,” said Hilmi Karaca, a Kurdish activist who witnessed the explosion. “We can’t even carry out the funerals because the bodies are in pieces. They are struggling to identify the victims.”

*This is a developing story. We will update when more information becomes available.

More proof that Isalm is a religion of piece(s).

I find the use of the term “suicide bomber” to be very careless. It’s been frequently used to describe people who were kidnapped, had a bomb strapped to them, and they sent out to be the first victim when someone else detonated the bomb.

Not all people with bombs strapped to them are willing. Take a breather on using the word “suicide” for a while, until more is known. If this was a kid, they might have spent the last hours of their life, not glorying in their soon-to-be martyrdom, but absolutely terrified.

Ahhh, the little ones.

They blow up too quick.

The Daily Mail is reporting the child bomber was detonated remotely.
If that’s true then all ISIS strongholds need to be carpet bombed with pig offal and beset upon with packs of wild jackals and wolves. If they can be creative, we can be creative.