Report: 400 Floridians may be infected with Zika by mid-September

Report: 400 Floridians may be infected with Zika by mid-September

In the last Zika update I filed for Legal Insurrection, I noted 4 Floridians were determined to have been infected with Zika locally (most probably by mosquito bites).

Now it anticipated that there will be up to 400 non-travel Zika cases in Florida by mid-September.

Locally transmitted Zika cases in Florida could reach 400 by summer’s end, projections released Tuesday by a team of American biostatisticians suggests. Researchers project the virus will also spread to other Southern states, including Texas, South Carolina and Oklahoma.

“It wasn’t clear at first whether mosquito densities were high enough to sustain an outbreak in the U.S.,” Dr. Ira Longini, a biostatistics professor at the University of Florida and a senior researcher at UF’s Emerging Pathogen Institute, said in a news release.

That all changed when Zika began being transmitted in Miami, where officials had reported 37 non-travel-related Zika cases as of Monday. On Tuesday, that number rose to 41, consisting of four new cases in South Florida and one in the Tampa, Florida, area.

The rate of spread of Zika through the Sunshine State could be increased by storms projected to hit its shores through hurricane season.

Florida braced for a double whammy from Mother Nature on Thursday, with a tropical wave in the Caribbean potentially threatening to balloon into a tropical storm or hurricane just as the region fights outbreaks of the mosquito-borne Zika virus.

Such a storm would make it harder to control the Zika outbreak, which has grown to 43 cases in Miami-Dade and Palm Beach counties.

…While a tropical storm or hurricane would initially blow mosquitoes out of the sky, it could also leave behind standing water that allows the insects to breed, said Joseph Conlon, technical adviser to the American Mosquito Control Association.

However, citizens in the rest of the country aren’t in the clear, either…unless they live in Wyoming or Alaska. 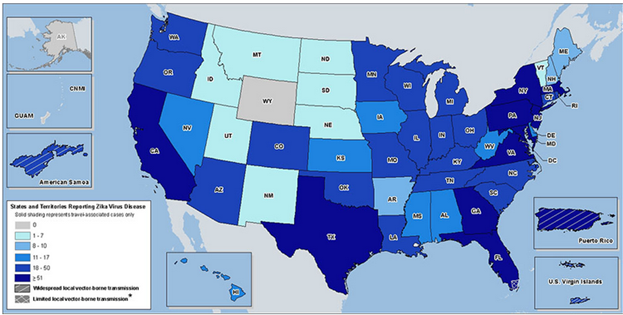 As research and medical professionals continue to evaluate the impact of Zika on those infected, some disturbing determinations are being made.

The focus of Zika concern has been pregnant women, due to the microcephaly birth defects observed in their babies. However, Zika in adults may not be as harmless as initial reports have suggested, as a new study focused on adult animals shows that the virus may cause neurological and cognitive function problems.

…The study found that the Zika virus appears to target neural progenitor cells—stem cells that are the earliest form of brain cells, which eventually become fully formed neurons. While the fetal brain is composed of mostly neural stem cells, they are present in only two areas of the brain in adults: the anterior forebrain and the hippocampus. These regions are critical to neuroplasticity and are linked to memory and cognitive function.

“Ours is the first study to look at Zika infection in the adult brain in an animal model. What we found was quite striking and dramatic. The stem cell population are highly vulnerable to Zika,” says Dr. Joseph Gleeson, lead author of the study. “In a sense, it’s the exception that proves the rule. It’s not so much the age of the person but the type of cells themselves that are vulnerable and not vulnerable.”

…The Zika virus is already linked to Guillain-Barré syndrome, a rare though temporary condition in which the immune system attacks nerves and causes weakness in the lower extremities and even paralysis. The Pan American Health Organization says some 123 Zika-affected countries have reported an uptick in the number of patients diagnosed with Guillain-Barré since the start of the outbreak.

Additionally, reports also indicate the virus can hide in vaginal tissue and the bloodstream of infected infants much longer than anyone expected and cause severe developmental problems. In one case, a 6-month-old baby is now showing signs of neurological decay, despite the fact the child was born with no symptoms but harbored the pathogen in his blood for over 2 months.

Given the likely spread and the new discoveries, it is no surprise that the Food and Drug Administration has recommended the expansion of the Zia screening process to include all blood donations in the U.S., not just those in Florida or Puerto Rico.

But by all means, don’t stop illegal immigrants from arriving from zika infested countries.

And don’t use the very effective tools we already have, for controlling target mosquito populations.

Well, if the Left would stop immigrants from these areas, invest in actually stopping the virus instead of lining their pockets, and not be so pro-environmental anti-human then just maybe we would stand a chance.

It’s the air conditions we need to worry about not a mosquito. Oh crap, it feels like my malaria is coming back.

Move Congress to Florida, the Okefenokee swamp area. Let harry reid do his filibuster there.

I’d wager to say most the cases originally transmitted were NOT from illegals. There is no proof illegal aliens spread it here. Likely, tourists visiting Zika-prone areas, including all of the Caribbean and especially Puerto Rico, account for most travel-related cases.

Fumigation is only going to get Florida so far. The bigger issue is the sexual transmission of the virus. I’ve seen very few efforts at educating the public about this, especially since the GOP and the Governor have been so adamant against Planned Parenthood’s potential involvement in combating the spread of zika. Zika is an STD that happens to also be transmitted by mosquitoes. Why shouldn’t Planned Parenthood be involved? It’s like declaring a war and then defunding the military.

I hope the good people of Florida remember this. If 400 FL are infected in the next few weeks, then odds are high there will be a zika baby or two born with microcephaly. Each child born with such defects represent $4-10M each in lifelong medical care and lost productivity by families. I have to ask you: were the partisan politics it worth it??