Olympics bringing the fiercest enemies together! 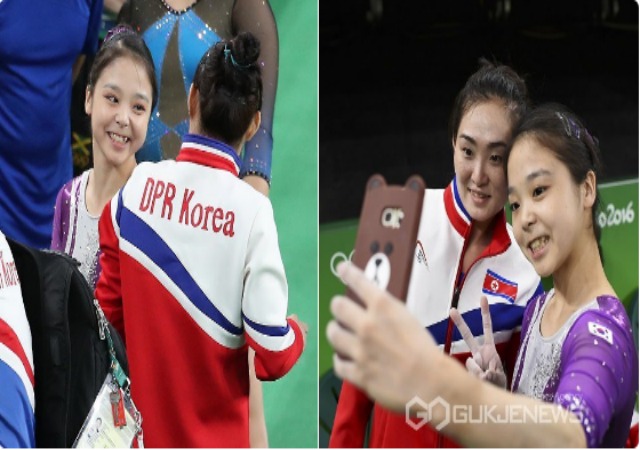 The tension between North Korea and South Korea remain tense, but two gymnasts at the Rio Olympics cast that aside to take a selfie.

Gymnasts from North & South Korea take a selfie together. This is why we do the Olympics. pic.twitter.com/Id44OuehN3

The two countries remain at war when they agreed to an armistice in 1953. They never signed a peace treaty.

Observers have said the North Korean athletes have become more social than in previous years, laughing and joking with others. A friendship budded between newcomer Lee Eun-ju of South Korea and veteran Hong Un-Jong of North Korea.

The two bonded during the qualifications and decided to take a selfie together.

In 2008, Hong won the gold medal in vault, becoming “the first North Korean gymnast to win a medal at an Olympics game.”

I thought we had the Olympics so millionaire professional athletes can get an ego boost.

“This is why we do the Olympics.”

To get cute pictures of little girls? Seriously?

I’ve read stories of Olympic legends, such as how the Berlin Olympics somehow legitimized the Nazi regime, etc., etc., bullish!t.

This is a group of sporting events that has no impact on the relationships of nations or world history.

I hope all of the athletes have a fine time, and wonderful memories.

One guess who’s phone that isn’t. Do they even have cell phones in N. Korea?

Yes, the main service provider goes by the brand name Koryolink. It’s a 3G network established in 2008 as a joint venture between the Egyptian cell phone service Orascom and state-owned Korea Posts and Telecommunications Corporation. It’s only available in Pyongyang and a few other large cities and along a few major highways. The party elite gets government cell phones. Koryolink subscribers have to pay for the service, but it’s very expensive so the only people who can afford it would still be the party elite, jut not at the top echelon who rate a government-provided phone.

I expect that this DPRK gymnast has a Koryolink cell phone but you are correct that you won’t see her using it in Rio because it won’t work there. Koryolink only works in the DPRK, calls from outside or to the outside of the country are blocked, and the NORKs monitor the network.

Apparently it’s very popular and has between 2.4 and 3 million subscribers. It’s also profitable. In a very communist/socialist heist, though, Kim Jong Un has made it illegal for the profits to leave the country so the NORKs pocket it and Orascom (which I believe is the majority stake holder) has declared it has lost all control over the network.

Serves them right; that’s what you get for thinking you can do business with socialists let along communists.

There are millions more illegal “Chinese cell phones,” a term used to describe an actual phone or just a SIM card that can turn a Koryolink phone into an illegal phone able to use the Chinese network if the user is close enough to the border. This wouldn’t have been possible before Koryolink as the NORKs use German cell phone detectors (Thanks, Germany!) which can only detect cell phones receiving cell phone signals, not trasnmitting. I don’t understand why that is, but that’s what I’ve been able to determine. And the NORKs can’t figure out if the phone is receiving signals from the NORK network or the Chinese network. So what they’ve resorted to are frequent unannounced network shut downs. Then they know the only cell phones still receiving a signal are illegal Chinese cell phones.

The NORKs have branded illegal cell phone users traitors, and have cracked down on them. Also anyone using foreign instant messenger or text apps are charged as spies as well. Unlike conversations these apps send and receive large amounts of data

…in a short amount of time. Too short for the state security monitors to detect and locate. Essentially it’s a burst transmission.

That NORK gymnast won’t be purged. She’s playing her role in the NORK’s psychological warfare campaign. They do this every once in a while; it’s called a “charm offensive.” They try to convince the South Koreans that the NORKs are just wonderful and nice people, not a threat at all, and that those awful warmongering Americans and their puppets in the Blue House are the real threat and need to be kicked out.

Making much easier for the NORKs to take over the entire peninsula.

So, no, this statement isn’t true.

“Olympics bringing the fiercest enemies together!”

First, you have to believe that little air head from South Korea was ever a fierce enemy of the North. Academics in the south are not quite as left wing as they are here but they are left wing and South Korean students are as convinced as Barack Hussein Obama that the main cause of evil in the world is the US. And to the extent she did see the the NORKs as a threat it’s the NORK gymnast’s job to disarm her.

And remain her enemy.

Oh, she will be punished.

I have been a good sport about white listing this site for advertising, and I have been known to use Amazon and merrily skim by the clickbait articles and the dumb ads, but they’ve been running ads for one Joel Scott Osteen, who is some sort of motivational pastor, that makes my skin crawl.

I do not know much about this guy, except that he writes motivational books, and every time I see a picture of him, the hair stands up on the back of my neck, a response usually reserved for shiny, black or brown spiders with long, skinny, hairless legs (black/brown widow spiders–I live in California. They are a thing, here).

Joel Osteen is truly a snake-oil salesman, selling his brand of Christianity that has very little bearing on what a true relationship with Christ is all about.

This “pastor” will have a lot to answer for when he stands before a holy God.

We all will answer to Him, but Osteen has mis-lead a LOT of people…