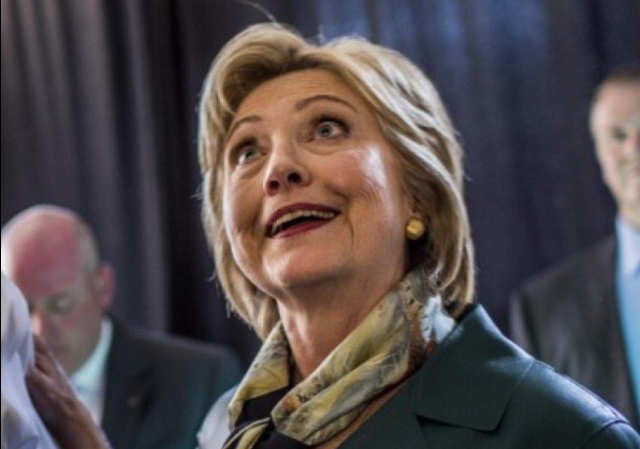 The Washington Post once again called out Democrat presidential candidate Hillary Clinton’s claims that the FBI confirmed the FBI confirmed all of her public comments have “been consistent and truthful with what I’ve told them.” Hillary responded today by saying she “short-circuited” over response:

“That’s really the bottom line here. And I have said during the interview and many other occasions over the past months, that what I told the FBI, which he said was truthful, is consistent with what I have said publicly,” Clinton explained Friday. “So I may have short-circuited it and for that, I, you know, will try to clarify because I think, you know, Chris Wallace and I were probably talking past each other because of course, he could only talk to what I had told the FBI and I appreciated that.”

.@HillaryClinton on her comments about the email controversy: "I may have short-circuited" pic.twitter.com/wuDIvA11Lk

NO, HILLARY. Even the FBI couldn’t confirm if your public remarks were “truthful:”

Clinton continues to twist this statement by Comey into a line that suggests the FBI declared that her public remarks on the email issues were truthful. But Comey repeatedly refused to confirm that when pressed by lawmakers: “That’s a question I’m not qualified to answer. I can speak about what she said to the FBI.”

This is from The Washington Post. Yes, THE WASHINGTON POST, who has shot down her claims at least three times before. We need to take her word for it even though she’s bungled this THREE TIMES before. It’s taken FOUR times for her to clarify? Another thing: No one recorded the FBI interview.

This is what she said to Fox News Sunday host Chris Wallace:

“That’s not what I heard Director Comey say … Director Comey said that my answers were truthful and what I’ve said is consistent with what I have told the American people, that there were decisions discussed and made to classify retroactively certain of the emails,” she said.

No, ma’am. This is what Comey said:

Comey told Congress that his agents “have no bases to conclude she lied to the FBI.” The FBI. He never once mentioned her PUBLIC statements.

But that’s not the whole story. When House Oversight Chairman Jason Chaffetz (R-Utah) asked whether Clinton had lied to the American public, Comey dodged: “That’s a question I’m not qualified to answer. I can speak about what she said to the FBI.”

At another point, Comey told Congress: “I really don’t want to get in the business of trying to parse and judge her public statements. And so I think I’ve tried to avoid doing that sitting here. … What matters to me is what did she say to the FBI. That’s obviously first and foremost for us.”

As Glenn Kessler said, Hillary “is cherry-picking statements by Comey to preserve her narrative about the unusual setup of a private email server. This allows her to skate past the more disturbing findings of the FBI investigation.”

So, do we call her Number 5 and say she is alive? Or will she remain a typical robot under the command of those who bought for $21 million?

The phrase is much more appropriate than she realizes, insisting as she still does that FBI Director Comey affirmed the truthfulness of her statements.

A short-circuit allows electrical current to pass from one wire to another, thereby often skipping the devices or components it should be powering.

So she’s short-circuiting words. In this case, the word “not”:

GOWDY: Secretary Clinton said there was nothing marked classified on her emails either sent or received. Was that true?
COMEY: That’s [bzzt] true.

Alternatively, the shock (heh!) of the e-mail scandal caused her brain to short-circuit, so that she now actually believes the false narrative she’s pushing.

And if that’s the case — if she’s so easily catapulted into memory-altering dementia — is this a woman we really want anywhere near the levers of power? Or the nuclear launch codes?

Yeah, . .. . This woman is preferable to D. Trump as the #never T-rumpers would have you believe.

Now now folks. The Hillary-OS v6.0.4 update is going to fix this. She’ll be more life-like than ever, be smoother with her lies, and will walk more briskly without a walker. She’ll be almost human. Nothing we can do about the cankles, that’s a hardware issue.

Otherwise, not a bad move. Since “short-circuited” in this context is meaningless, she can’t be attacked for telling another fib.

She has already used up all her “I don’t recall” “I don’t remembers”s for Filegate?

Remember — the White House had a thousand of two FBI files on site of political enemies? And NO ONE knew how they got there or who hired Craig Livingston?

And yes … she is becoming more incoherant. I am still trying to figure out what the sentence means besides “Screw you.”

Having a personal server likely saved her from being hacked like the state department ones. Seven (eight?) congressional committees headed by republicans have not found guilt. The goal of not being hacked clearly offsets the scandal of not using state servers. It’s the kind of wise decision making needed in a president.

you forgot the /sarcasm tag

Crooked Hillary has a very serious mental issue.
She is a compulsive liar! She can not help her self.
She lies even when she know people know that she what she
is saying is a lie!

She is disqualified to be President. How can she be trusted with National Security information. She can not be trusted and her time at the State Dept. proves that.

In a side note, the meme of today.

I haven’t heard Black and White in a while. Loved hearing it again, but it is missing something.

My God, she hasn’t a shred of integrity. How anyone could consider her ‘better’ than Trump is beyond me. They’re both trouble, but she just takes the cake.

And I’m sure she holds no ill will toward Director Comey.

Another word for dimentia.

Do you really want a short circuit as president?

Would make a great bumper sticker. Or #

She didn’t “short circuit”: she had another of her many mini-strokes.