Nigel Farage: Nothing Will Change if Hillary Wins

Nigel Farage: Nothing Will Change if Hillary Wins 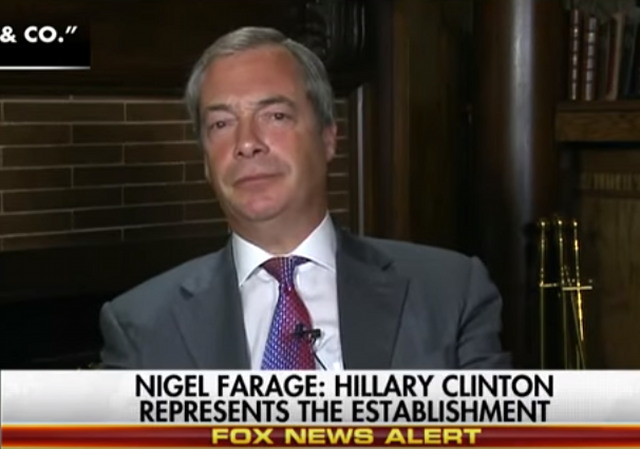 The British Brexit leader Nigel Farage recently spoke at a Donald Trump rally and offered some words of encouragement for attendees.

Former leader of the UK Independent Party Nigel Farage, credited for Brexit, addressed the audience at a Trump campaign rally in Jackson, Mississippi on Wednesday night. Farage left the UKIP after the United Kingdom voted to ‘leave’ the European Union.

“Anything is possible if enough decent people want to fight the establishment,” Farage said.

Farage also took a shot at President Barack Obama for campaigning against Brexit.

“The big card, the prime minister (David Cameron), decided to play in the referendum is he got a foreign visitor to come to London to talk to us. Yes, we were visited by one Barack Obama. And he talked down to us. He treated us as if we were nothing,” Farage said.

“I wouldn’t vote for Hillary Clinton if you paid me!” Farage jokingly said to the crowd.

“I wouldn’t vote for Hillary Clinton if she paid me!” Farage said to laughter.

Farage appeared on FOX Business with Jim Varney a few days later. Varney suggested that people might see him as meddling in the U.S. election the same way Obama inserted himself into the Brexit vote but Farage insisted he wasn’t telling people how to vote. He also suggested that if Hillary wins, nothing will ever change.

In response, Hillary Clinton has branded Farage an extremist.

Hillary Clinton has launched a scathing attack on Nigel Farage, linking him to a “rising tide of hardline, right-wing nationalism” and accusing him of being a Vladimir Putin-style extremist.

Ms Clinton’s attack on the former leader of the UK Independence Party (Ukip) comes after he shared a platform with Donald Trump, the Republican candidate for US President, in Jacksonville, Mississippi, on Thursday.

Mr Farage, who was introduced as the man who orchestrated Brexit by Mr Trump, had said he would not vote for the Democratic presidential hopeful even if he was paid to do so.

But responding to his comments at a rally in Nevada, Ms Clinton accused the former Ukip chief of having “stoked anti-immigrant sentiments” during the European Union referendum campaign. Mr Farage was widely condemned at the time for appearing in front of a “Breaking Point” poster showing a vast queue of refugees stretching into the distance.

“Just yesterday one of Britain’s most prominent right-wing leaders, a man named Nigel Farage, who stoked anti-immigrant sentiments to win the referendum to have Britain leave the European Union, campaigned with Donald Trump in Mississippi,” Ms Clinton said.

But Farage is right. Hillary is the establishment candidate and represents a whole lot more of the same. Possibly worse.

“But Farage is right. Hillary is the establishment candidate and represents a whole lot more of the same. Possibly worse.”

Well, yes. And on many levels.

But that’s true of Mr. Establishment, as well.

If you look objectively at his positions, he’s solidly to the LEFT of Mitt Romney in 2012, a man vilified as the anti-Christ.

His trade, borrowing, and entitlement positions are essentially identical to Bernie Sander’s. Exactly in line with the AFL-CIO for the last decades.

His immigration positionsssssss are “blowin’ in the wind”. Mostly they just blow. Except when they suck.
http://www.dailywire.com/news/8644/heres-full-timeline-donald-trumps-immigration-aaron-bandler

Got to admire the way you continue to campaign for Hillary while pretending not to. I may not know exactly what Trump will do, but I do know what Hillary will do based on her past actions. I’ll take a chance on Trump.

You’re free to do that.

Just don’t pretend that what I said isn’t true. It is. And I’ll be having the dubious honor of telling you so in the next few years if T-rump wins, as well he might.

And you can suck me about that “campaigning for Hillary” bullshit.

“And you can suck me about that “campaigning for Hillary” bullshit.”

Ain’t that cute, “2012”. You mean the year in which he praised Trump to the heavens…

Romney was a supporter of abortion and signed the planned parenthood pledge.

Romney supported a path to citizenship for illegals.

Romney complained about the unfair trade with China and their currency manipulation and said he would use tariffs to solve the problem.

You mean that Romney?

“He got a foreign visitor to come to London to talk to us. Yes, we were visited by one Barack Obama. And he talked down to us. He treated us as if we were nothing,” Farage said.”
You betcha Obama talked down to the Brits.
Never forget, Buraq Hussein Obama’s first official act in office, January 20, 2009, was to take the bust of Winston Churchill, graciously donated out of the generosity of the English people, and toss it into the White House garbage dumpster.

Only for the sake of historicity…

The bust was on loan, and he returned it. But the point is well-taken. Barracula HATES the Brits, along with most all our allies. Just going by conduct.

As Rags says, the story is not true. The bust was on loan from the UK embassy, because the White House’s copy of that same bust was being repaired. By the time 0bama came in the repairs had long ago been done, and the White House now had two copies, so the curator returned the loaner. 0bama had nothing to do with that decision.

The establishment—annoying, expensive, self-serving, and ineffectual as it is—isn’t really about deceit, crime, treachery, and corruption without bound.

I’ll disagree with that Tom.

The establishment really is about “about deceit, crime, treachery, and corruption”.

They are robbing this country blind.

It was a good speech, worth watching. Note that he didn’t say anything pro-Trump. When discussing how he would vote if he were an American citizen, he didn’t say he’d vote for Trump, he just said he wouldn’t vote for Clinton. That wasn’t by accident. Farage is a committed free trader; he can’t bring himself to endorse a protectionist.

Or it could be that after Obama told the Brits how to vote on Brexit, Farage didn’t want to make the same mistake. The endorsement of Trump was heavily implied when he got on the stage with him at a political rally. No reason to do that otherwise.

What you say is true only if you ignore the fact that he met with Trump on stage at a Trump campaign rally and stated that Trump’s opponent was the continuation of failed policies. That’s an endorsement de facto while avoiding the de jure endorsement which would be criticized as telling us how to vote. If he didn’t want to support Trump, the meeting would have been private to discuss trade, US Brit relations, etc. so as to deny Trump the publicity value of their meeting.

You’re not making any sense. He was already telling the people how he would vote if he were American. There’s no difference between saying he would not vote for someone and that he would.

Test your logic. Accept as true that he wouldn’t vote for Trump. Is it logical that a man who wouldn’t vote for Trump would help him by appearing on stage at a campaign rally and speaking against Trump’s rival? The logic doesn’t hold up. Since we know for a fact that he did appear at Trump’s rally and spoke against Clinton, your premise that he doesn’t support Trump must be false.

Sorry, I ain’t buying it. There’s no reason for him to be on stage at a rally, acting as he did, unless he supports the candidate. NONE.

There’s plenty of reason:
1. He’s a publicity hound and this is a major opportunity for publicity in a market where he’s not already well known.
2. He opposes Clinton (and who doesn’t?).

Nothing will change sounds positively rosy compared to what I hear otherwise.

Another case of terminal TDS.

Obama seems to be doing things his own way out of spite for the US, for some foreign ruler, or for Islam. Maybe a combination of all three. Hillary Clinton’s actions show she is only out for herself and for money. She makes Obama look pretty clean cut.