Over 10,000 firefighters battling 10 conflagrations across the Golden State 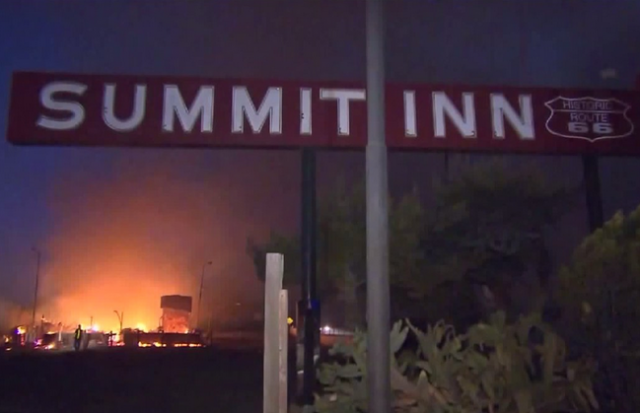 While Louisiana is drying out from its epic flooding, California firefighters are valiantly battling massive wildfires that have erupted throughout the state over the past week.

Here are some of the fires now raging in California:

This is in addition to Soberanes Fire near Big Sur that has closed lanes on a portion of state Highway 1 in Monterey County, blackened over 76,000 acres, damaged or destroyed over 30 homes, and is weeks from full containment. Now, reports are just coming in about another blaze that has forced evacuations about 20 minutes from where I live in San Diego.

This map from CalFire sums up the 10 wildfires that are spread throughout the length and breadth of my home state.

Of all of these conflagrations, the one to watch is the Blue Cut fire, which has closed the El Cajon Pass (a major transportation route between Southern California and Las Vegas).

The Blue Cut fire has been deemed “monstrous.” Over 80,000 Californians have been warned to evacuate, and it has alraedy caused the complete destruction of the beloved, historic Summit Inn.

After opening in 1952, the diner — outfitted with red leather booths and walls adorned with memorabilia — became a familiar spot for those traveling to and from the High Desert.

The Summit Inn, which recently changed ownership, had touted its celebrity clientele, including Pierce Brosnan, Clint Eastwood and Elvis Presley.

The cause of the Blue Cut fire is unknown, but an accidental origin is suspected.

The cause of the blaze is under investigation, but most wildfires in Southern California are caused by people, accidentally or intentionally. According to Caltrans, an average of 156,000 vehicles a day pass the Kenwood Avenue area — a endless source of sparking tail pipes, engine fires and discarded cigarette butts.

….“It’s not how we fight the fires. It’s how do we stop them from starting in the first place,” argued [Director of the California Chaparral Institute Richard] Halsey, who thinks Caltrans should consider placing concrete k-rail barriers along the freeway in the pass to stop sparks from flying into roadside vegetation.

However, the Clayton Fire apparently is the work of a serial arsonist.

A suspected serial arsonist who also worked as an inmate firefighter for four months in 2007 following a methamphetamine and gun conviction kept his face hidden during an arraignment Wednesday, and tried to run out of court once the proceedings ended.

Damon Anthony Pashilk, 40, of Clearlake appeared in the courtroom of Superior Court Judge Andrew Blum, but allegedly passed out before the 1:15 session.

…Lake County Deputy District Attorney Richard Hinchcliff told NBC Bay Area that Pashilk will be charged with arson regarding the Clayton Fire with a special enhancement because the area was still under a state of emergency from last year’s Valley Fire. He will be charged with arson for starting 12 fires — one of which burned a couple of acres and an uninhabited mobile home — and attempting to start one more, he said.

The cause of the Chimney Fire is still unknown at this time. The Soberanes Fires was caused by an illegal campfire:

The illegal, 2-foot by 2-foot campfire was left unattended just off the Soberanes Canyon Trail, Cal Fire said at a Tuesday press conference.

Whoever lit the campfire came to a fork in the trail and followed the path that leads into a thick redwood forest — not up the steep ridge trail that goes up the mountain — about 2 1/4 miles east from Highway 1, Blue said. The person built the campfire at a scenic spot where Soberanes Creek intersects with another creek and forms a waterfall.

The Big Sur area, which was hit by the Soberanes Fire, is one of the state’s natural treasures. It is heartbreaking to see the ruin of so much natural beauty, iconic buildings, family residences and essential businesses.

A big thanks to all our state’s firefighters, 10,00 of whom are trying to contain and control these blazes. It look one long, not summer for our heroes.

Lucifer reclaiming what is his.

I’m no fan of California either, but my son lives there as do many other fine people, so it’s difficult for me to summon any shadenfreude.

Colorado too has its share of fire’s. At a time like this given these circumstances a thank you to the people battling the fires. Remember, forests are burning, from Leslie’s article including redwoods. With those redwoods involvement that implies sequoias.
I’ve been throughout California. In some areas a number of times. It’s a beautiful state.
I grieve for the forests & trees. I’ve been through most of them.
Some of the trees on high windswept areas are thousands of years old.

Actually, sequoias and a number of other species (such as jack pines) require fire to release the seeds from their cones so that they can reproduce.

As long as the fires don’t crown. If the fires crown, the devastation will be total.

In a few years the area will start being recolonized. But no one will see those magnificent trees in our lifetime or your grandchildren’s lifetimes.

Ironic? It seems prescient. It seems like good government. Did you think the tax was somehow going to stop the fires? The fires cannot be stopped. They can only be managed. If they are managed, they don’t become catastrophic.

The money can be used to cut fire breaks. Buy and preposition equipment and retardant. Train personnel. In the worst case, you need money to relocated people.

They know the fires will happen. Raising money to pay to manage the woodlands and fight the fire when the occur seems prudent. Just who is to pay for the fires they are fighting? I know – someone else.

A few years ago, Moonbeam and his cohorts added a huge wildfire tax on property owners considered “rural”, and the first big fire after its implementation was in the Sierra foothills that threatened San Francisco’s water supply (HetchHetchy Reservoir, I believe)–ironic, right? By the way, that fire was started by a teenage girl having a hissy fit.

Ironic? It seems prescient. It seems like good government. Did you think the tax was somehow going to stop the fires? The fires cannot be stopped. They can only be managed. If they are managed, they don’t become catastrophic.

The money can be used to cut fire breaks. Buy and preposition equipment and retardant. Train personnel. In the worst case, you need money to relocated people.

They know the fires will happen. Raising money to pay to manage the woodlands and fight the fire when the occur seems prudent. Just who is to pay for the fires they are fighting? I know – someone else.

I will probably see the Blue Cut fire from the air tomorrow morning when I’m approaching LAX from the east. Prayers for all the people living there.

How many of these wild fires were arson?

It almost doesn’t matter. Fire is a natural part of that ecosystem. It will eventually be caused by lightening. Suppressing the fire only builds up the tinder and deadwood so that you eventually get an unnatural fire which burns too hot and too long and destroys the ecosystem.

The problem is that we build in places that we know will eventually burn and then demand that the fires be suppressed.

Fun fact: The Native Americans of the plains regularly started fires because the bison liked new grass rather than forests.

bluecut causing container issues at port of la as both bnsf/up have mainlines through there.

My 86 yo hermit uncle is in line of the Blue Cut.

He and his only neighbor are standing by to pull out.

‘Sparking tailpipes?’. I don’t recall having EVER seen a car or truck tailpipe spark. I have however seen hundreds, if not thousands, of people throw burning cigarette butts out their car window. What is it about cigarette butts that makes people who would otherwise never litter thinks its ok to toss them on the ground?

Dirt and trail motorbikes have to have spark arrestors to be legal. Think about it. An internal combustion engine is not that efficient. Inevitably a certain amount of unburned fuel escapes through the tailpipe. Some of that is hot enough to spark.