Did Someone Hear Hair Holding Sword of Damocles Start to Fray? 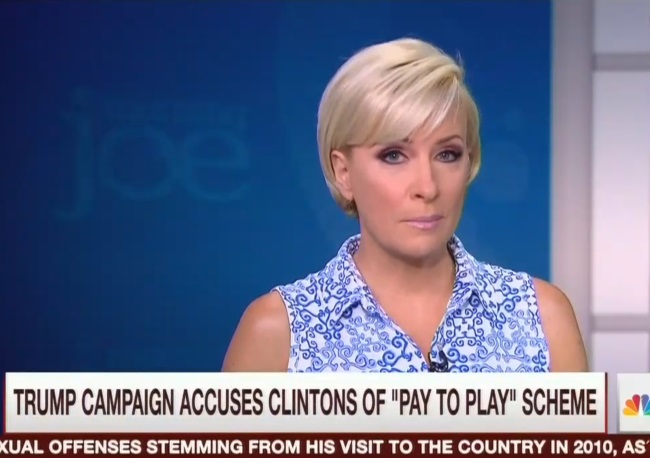 A few days ago in our Quick Hits feature, this Insurrectionist wrote “the server is a Sword of Damocles over Hillary’s campaign. Whatever the polls may say, Clinton knows that she is just one disclosure away from disaster.” Has Mika Brzezinski heard the hair holding that Sword start to fray? Today’s Morning Joe reported on the disclosure that a senior Clinton Foundation official had contacted close Hillary advisers Huma Abedin and Cheryl Mills to request, as something “very important,” that they set up a contact between a billionaire foreign Foundation donor and the US ambassador to Lebanon.

Reacting, Mika said “as a Clinton supporter, I think the bigger question is, what is going to come out? Could something big come out? Could we have implosion of epic proportions. Could you say that the candidate you support doesn’t have something lurking here that could bring down her campaign?”

Fellow Dem Harold Ford, Jr. tried to console Mika: “I haven’t seen any e-mails that suggest that anything would cause it to implode.” But Mika’s fears were not allayed: “this worries me.” Ford begs the question. It’s not a question of emails he’s already seen: it’s those potentially coming down the pike that could sink Clinton.

Note Bill Clinton’s weasel word: we never did anything “knowingly” inappropriate. Depends on what the meaning of “inappropriate” is, Bill?

KRISTEN WELKER: State Department emails obtained by a conservative advocacy group [Judicial Watch] raising fresh questions about the relationship between the Clinton family foundation and Secretary Clinton’s State Department. One dated 2009. A Clinton Foundation executive emailed Secretary Clinton’s top advisors, Huma Abedin and Cheryl Mills, requesting they set up a meeting between a billionaire donor and the US Ambassador to Lebanon. This is very important, he said. Critics have pounced on foreign donations to the foundation, questioning whether that bought donors access to the State Department.

BILL CLINTON: We have never done anything knowingly inappropriate in terms of taking money to influence any kind of government American policy.

MIKA BRZEZINSKI: As a Clinton supporter, I think the bigger question is, what’s going to come out? And could something big come out? Could we have some sort of implosion of epic proportions? Is there something lurking there. Can you confidently say that the candidate you support doesn’t have something lurking here that could bring down her campaign?

HAROLD FORD, JR.: I haven’t seen any emails that suggest that anything would cause it to implode —

MIKA: This worries me.

Hillary’s emails will be ignored and under reported. If she broke the law the DOJ and FBI will cover for her. Anything really juicy will be kept from public view until after the election.

It’s always a sad day when the USAG is accused of obstruction of justice, especially when it seems warrantied.

The reports will be ignored and underreported if we let them be.

BTW, where is the GOPe on this? (Probably in a bunker somewhere, hiding out until after the election.)

Remember: the GOP is the opposition party, bound by our votes to do the work the corrupt media will not. Trump is an opposition candidate. Mike Pense is not – he’s part of a tumor that is the GOPe and he will work against Trump’s election, if not actively, then passively.

The Trump campaign and the GOP should be flooding the airwaves with political commercials spreading this kind of news. We know the GOPe won’t do it – so it’s up to Trump.

It is abundantly clear that Hillary’s supporters could care less about her crimes.
And… unless you can reach some of her core supporters we’ll have a female criminal in the White House next January.
Her supporters have their fingers in their ears, their eyes closed, and are shouting “la, la, la, la, la …” at the top of their lungs.
How do you reach something through that?
Hillary could shoot a puppy in the head at the superbowl half-time show and her supporters would not leave her.

As someone else observed, worst case she will be the first President to pardon herself on Inauguration Day. She is that obsessed that she would consider that as having solved the problem, and the MSM would as well.

Maybe. She’ll try and charge for the speech, and the government will try not to pay it.

She needs a safe space.

There are two email scandals.

The first casualty of Hillary Clinton’s server
There are consequences to compromising national security
http://www.washingtontimes.com/news/2016/aug/9/shahram-amiri-the-first-casualty-of-hillary-clinto/

“Exactly how damaging the classified information is that was discovered on Hillary Clinton’s server became clear this weekend when the Iranian government executed an alleged spy. He had been mentioned in at least one email from an aide to Hillary, which called him “our friend.””

That article was from Tuesday. Now we know why they all need to talk about …anything else.

Then there is the DNC email scandal.

It seems to me that the videos are proof of “PERJURY” when Hillary Clinton lied to Sen. Rand Paul back in 2013 Congress

So I would say Hillary Clinton has several email scandals. The on I am presenting is “PERJURY” in video!

News Flash;Comey exonerates Clinton foundation becaus they did not have criminal intent. They were just ignorant of the law. Main evidence for DOJ was Bills statement to news reporter they did nothing knowingly against the law. Bill now shopping Grand Canyon to unnamed tourist company.

Actually, that’s not true. Comey did recommend that the DoJ open an investigation of the clinton foundation and the DoJ refused.

“Could something big come out?”

It has. Repeatedly. Didn’t you notice?

Exactly. Why are these people concerned about what may be revealed in the future? Hasn’t what has already been revealed enough? Apparently not for True Believers, but that begs the question, “What would cause them to dump Hillary?” The answer is, “Nothing that can be explained away, ignored, or memory-holed.”

Just like Trump has said over and over: “Crooked Hillary”.
The whole campaign is teetering on an e-mail dump that will without a doubt show how criminal they really are.

Maybe then even the extremely biased media will have to report the truth.

The naming of an Iranian scientist who coincidentally was hanged by Iran as a traitor SHOULD have been the end of Clinton.

This won’t sink her as her lap dog media will move heaven and earth to protect her.

You are correct. We know of five people, four in Libya and the Iranian, she has indirectly killed already but the big question is how many more do we not know bout yet?

Until the lapdog media figures out that they are complicit in multiple felonies. You are accessories to a criminal enterprise, reporters. Kinda like Goebbels.

After she is elected ( and perhaps issues pardons to all her staff, Bill and the Foundation players ), the Mainstream will finally come forward and say, ” There are serious criminal issues surrounding Bill and Hillary… HOW COULD WE HAVE MISSED THIS? “

I wouldn’t hold my breath if I were you. Look at all we found out about obama and he is still doing it and there is no recriminations from the msm yet.

“Could something big come out? Could we have implosion of epic proportions. Could you say that the candidate you support doesn’t have something lurking here that could bring down her campaign?”

I am a believer that the msm and the left have no threshold that can be reached that will make them revolt against hillary. Wish as we may it ain’t gonna happen!

Not unless they release an email that says, “Dear, Billionare 3rd world dictator. Thanks for you $1M donation to the Clinton Foundation, this money will greatly help with my election this fall. Once I take office, I’ll be sure that US Aid to your to your country triples. Let me know if you need anything else, VISA approval, fighter jets, enriched uranium. For the right price we can work anything out. Best Hillary”. If that does happen expect her to resurrect the Anthony “I was hacked” Weiner defense.

BILL CLINTON: We have never done anything knowingly inappropriate in terms of taking money to influence any kind of government American policy.

In Clinton-Logic, this is perfectly rational. Nothing they do or that is done to help them is ever illegal, while everything done to impede them is.

Don’t worry Sweetie, if she collapsed dead at a podium, the Establishment Media would immediately attack Trump for getting his hair cut by a hairdresser that wasn’t gay and they’d do it long enough for them to spin-up a CGI version of Granny to finish out the campaign and act as President.

We know you have her back…

Is Mark a lawyer?
If so then that’s a no no. Didn’t you get the memo yesterday?

How do you know it hasn’t already happened . She does have that Stepford Wife look, in an ugly kind of way .
Or perhaps the Twilight Zone pitcher , with no heart .

More like H->illary!’s handlers would play “Weekend at Bernie’s with her until body parts started falling off.

I wouldn’t worry if I were her. Hillary successfully turned this election into a referendum on Donald Trump. All she needs to do is stay out of the limelight, something she’s been doing so far without much difficulty.

Mika has good reason to be concerned about the coming releases of Hillary Clinton emails. Julian Assange has said they are COMING and Julian seems to be good at keeping his promises.

Let’s start with some sold proof that ISIS actually has Father and Mother http://beforeitsnews.com/opinion-conservative/2016/01/clare-lopez-on-ccbs-report-on-gun-running-in-benghazi-3094242.html

This only part 1 of a 3 part video. You know of course that starting a war without congressional approval is treason. So I find it interesting that a setting President and a Former Secretary of State are so directly responsible for all this dead and distraction.

Find the rest of these videos and you will have the complete story.

Hillary knew what she was doing…using a private, unsecured, server was not a mistake. The recent emails, part of the 30,000 she erased, clearly shows consciousness of guilt, which goes to “intent”.

Oh, so the emails exposing the Hillary crimes worry her more than a criminal running for president. How nice!

Good point. Mika’s concern reveals that she believes Hillary to be a crook, but she still supports her.

Exactly this, when I’ve pushed my liberal friends on the matter, most would rather vote for a criminal that has the same policies as them, than a Conservative of any type.