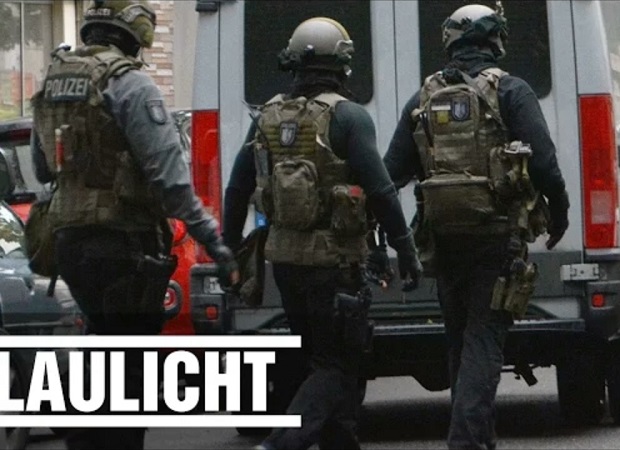 German Chancellor Angela Merkel’s policy of ‘Refugee Welcome’ is a gift that keeps on giving.

On Wednesday morning, German police carried out series of raids in several cities in the states of North Rhine-Westphalia and Lower Saxony. The raids were concentrated around the network of three prominent Muslim preachers suspected of working as recruiters and backers for the Islamic State (ISIS). The large-scale police operation comes just a day after German police in North Rhine-Westphalia arrested a man suspected of being a high-ranking member of the Islamic State.

Earlier this week, German police arrested a Syrian asylum-seeker charged with plotting an attack during the start of Germany’s soccer season.

German police have searched the apartments and businesses of at least three people suspected of recruiting for “IS,” prosecutors say. The raids come as Germany mulls tighter anti-terror measures.

spokesman for the prosecutors’ office in Karlsruhe told DW that one of the Islamists was believed to have given financial and logistical support to the group. He said that no arrests had been made so far.Police officials confirmed that searches had been carried out in the cities of Dortmund, Duisburg and Hildesheim.

Millions of migrants, predominantly Muslim men from North Africa and Middle East, began heading towards Europe after Merkel unilaterally suspended the Dublin Regulations governing the intake of asylum seekers. Germany alone took more than a million migrants in the last few months of 2015.

After pursuing the failed dogma of ‘Multiculturalism’ for over five decades, Germany is today grappling with the challenge of Islamic terrorism. Country’s legal system and police are unprepared to counter the rising tide of Islamism. Germany’s Interior Minister Thomas de Maiziere has called for new anti-terror laws. Minister de Maiziere wants to put more police on the streets, deport terror suspects out of the country and ban the burqas — the traditional outer garment garments worn by some Muslim women. It is unclear if Minister’s latest proposals would ever be implemented as they seem to lack the backing from Chancellor Merkel and the German parliament.

Despite last month’s deadly terrorist attacks, Chancellor Merkel has refused to reconsider her stance on migration policy. In a press conference called to address the country’s security situation, she reiterated her stand of “sticking to [her] principles” and “giving shelter to those who deserve it”.

German authorities are busy combatting the after effects of mass-migration, without bothering to tackle the real menace by securing the country’s borders in the first place. Raiding selective Islamist hideouts and going after individual terrorists once they successfully entre the country, will not stop them from carrying out further terrorist attacks on German soil.

[Cover image courtesy Bild, YouTube] [Author is an analyst based near Cologne, Germany]

I wonder why Merkel thinks all of those combat aged men need her country to survive in? If they had all stayed home they could have defeated ISIS easily. Who the hell thinks up this stuff? Suicide!

Germany has succeeded in purging their gene pool of men willing to die for a cause.

They should demolish the mosques and charge Merkel with treason while pushing the invasion back across the border.