My newest assignment at the consulting firm I work for focuses on marketing and client development.

My recent reading and experiences have given me many great tips and tricks. However, embarrassing customers because of their politics is not among the recommendations I have seen.

Yet, Lady Grey Jewelry thought that it was smart business to send Ivanka Trump, daughter of Donald Trump and enthusiastic advocate for her father, a snark-filled “thank you” note along with her web-order.

Ivanka Trump reportedly purchased an ear cuff Tuesday from the Lady Grey Jewelry website only to be mocked by the company’s owners on social media.

“Dear Ivanka, Thank you for your web order! We’re happy to let you know that the proceeds of your sale have been generously donated to the American Immigration Council, the Everytown for Gun Safety Organization, and the Hillary Clinton campaign,” the note read. “We hope you enjoy your new Lady Grey #helixcuff. Best, Sabine and Jill.” 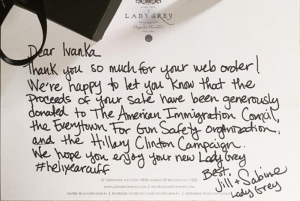 In an email, Martinelli explained the move:

“While we were flattered to receive an order from Ivanka Trump, our social and political views couldn’t be further from those of the Trump campaign. When we received her order, we instantly felt compelled to take the money and donate it to a few organizations that were more aligned with our ideals.”

True, in a free market, the proprietors of Lady Grey Jewelry can spend their profits as they see fit. However, they could have made the donations privately and without the nasty, classless, and contemptible note.

However, the owners chose to upload the message on Instragram and proudly display it.

The comments about this stunt have been cutting, as demonstrated by Twitter hashtag #Ivanka and by the following Facebook entries: 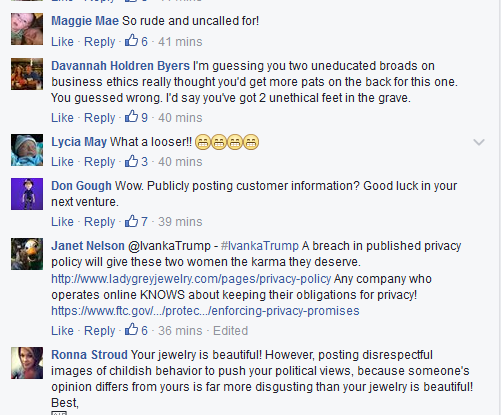 Ivanka Trump is noted for her fashion sense and style. The elegant, pink dress she wore during the GOP convention had thousands of women clamoring to to purchase it!

Ivanka Trump’s Stunning $139 Pink Dress. Can You Get It? https://t.co/TGr6cLEjEi

During the convention, there was a quest to return a lovely earring Ivanka wore back to the businesswoman.

Just imagine if that Ivanka’s earcuff was seen on the campaign trail, and noticed. Chances are high American women would be clamoring for a copy . . . and the jeweler who created them would be raking in the riches.

That would have meant more profits for the owners to distribute to the causes that best suited them.

Instead, Lady Grey chose to risk the sacrifice of a real profit opportunity to engage in political theater.

Middle and working class whites have been studied extensively by Thomas Franks and Charles Murray. When will somebody turn in a thorough class study of upper middle class progressives?

I don’t quite understand the purpose here, especially…having read Ivanka’s RNC speech…since Ivanka (a very nice young lady, I am sure) herself is a NY Progressive.

Do we know if any of the T-rump kids have changed their voter registration yet?

Any of you down-thumbing idiots read Ivanka’s RNC speech? Tell me where I’m wrong about her being a NY Progressive.

Well wetrags, why don’t you help us out?

Specifically what should we be looking for in her speech that makes her a NY Progressive? New York’s a big state and the culture varies quite a bit from Lake Erie to Long Island Sound, from the St. Lawrence Seaway to the Susquehanna River.

What particular dog whistle should we be listening for?

I can’t speak for Rags, but I know that when I was watching her speak at the RNC, I was struck by a number of her points. For example, she repeated the thoroughly-debunked lie about women earning less than men. She literally said the words, “equal pay for equal work” as if she just stepped out of a freshman Women’s Studies class. She then went on to proclaim that motherhood is the biggest factor in the “wage gap” (sound familiar) and that her dear old dad will change the labor laws (by magic, maybe) and make the American taxpayer foot the bill for everyone’s childcare. This, you may recall, is a large part of the progressives “cradle to grave” dependence on government plan.

I’m not a big fan of the current trend for politicians to say they’ll “fight for us.” I’m old-fashioned, and I want government out of my way so I don’t have to fight anyone and need no one to fight the huge, crippling, suffocating government we suffer. But Ivanka, sounding like she was channeling Elizabeth Warren, proudly announced that Trump would “fight for you” (not the country, not the Constitution, you. That little guy over there feeling all alones and at seas in the big mean world). The exact words that grated on me were “he’ll be your truest and most loyal champion.” Just like Superman and Hulk Hogan all rolled into one.

Not a dog whistle to be found here; all you had to do was listen. She’s not hiding her beliefs, nor her progressive ideals and goals. Just listen.

I just read the speech.

I read the speech, and much of it is quite good, but as FS points out, this is horrible:

“Women represent 46 percent of the total U.S. labor force, and 40 percent of American households have female primary breadwinners. In 2014, women made 83 cents for every dollar made by a man. Single women without children earn 94 cents for each dollar earned by a man, whereas married mothers made only 77 cents. As researchers have noted, gender is no longer the factor creating the greatest wage discrepancy in this country, motherhood is.
As President, my father will change the labor laws that were put into place at a time when women were not a significant portion of the workforce. And he will focus on making quality childcare affordable and accessible for all.”

1. The “unequal pay for women” canard has been thoroughly debunked.

2. The idea that the federal government should take money from women who want to raise their own children instead of delegating those responsibilities to others is pure progressivist feminism.

One can make the excuse that she is young and foolish and can’t be expected to know any better, but what about the people who vetted her speech? I would be interested in knowing her educational background.

I give the speech three stars (out of five).

One possible positive outcome of the Lady Grey Jewelry issue is that Ivanka will get to see what kind of people progressives are. That could be just the education she needs.

Fuzzy slippers , i did not listen but you saved me the trouble with your clear synopsis and analysis.Thanks. Most speeches are boiler plate blather and it is hard to take any of it very serious

did you READ the Ivanka speech?

I can’t fix your stupid.

If you lived in the NY metro area (and unfortunately, I do), you’d know that if she is a member of the GOP, her brand of politics is decidedly not Upstate (and land locked GOP) but very much the NYC strain….don’t be too liberal, but G-d forbid, don’t be conservative. You know, slightly to the right of Michael “I wear elevator shoes” Bloomberg, but not as conservative as Rudy who really isn’t as conservative as you think.

If you read her speech, you’d see that Rags and Fuzzy Slipper are spot on.

Ivanka should just return it for a full refund.

Complete with snarky note, also posted on FB and Twitter.

Don’t follow Ivanka, but from what I’ve seen she’s got good taste built into her DNA. Doubt she’d stoop so low as to reply in kind to the idiots.

Nah, she should do like Rush did with Dingy Harry’s letter–auction the jewelry off on Ebay and donate the proceeds to a worthy cause, like buying Killary a lifetime supply of Depends.

Seems to me like this happened before to a very popular singing group. They let their mouths overrun their feeble brains and made a lot of their fans very angry. That little stunt cost them millions in music sales and concert receipts.

The other half of a “ring link”?

One of those things you didn’t realize you couldn’t live without if you have money to throw away on jewelry.

Well. This will be crushing for the “buys jewelry over the Internet” demographic.

I’ll bet this destroys Lady Grey like Amazon is “destroyed”.

This is a replay of the Dixie Chicks and I hope the same outcome!Can you imagine GM or Ford saying to a customer that we appreciate your car purchase but because of your father’s belief we are donating all of the profit from the sale to a charity that is absurd? I hope the unfairness of these two women shows the progressive world how mean and thoughtless their cause is.

The wife just explained to me what an ear cuff was and my first thoughts are that this Jewelry Chain should likewise be educated by stockholders in court the meaning of fiduciary duty.

This was low class behavior. Instead of touting the sale and using it to broaden their customer base they acted like a low rent store front business. Won’t really hurt them except in the word of mouth world. There are many, many companies selling this type of accessory.

What’s an ear cuff?
Regardless, 15 minutes of fame will cost these idiots a lifetime of unemployment.

Although it was very stupid and a cheap shot at their customer, there will be no effect on their future business prospects because it is an internet business. If there is a backlash they can just change the name of the business and website and relaunch. In a small town they would have to move to another town if they insulted their customers.