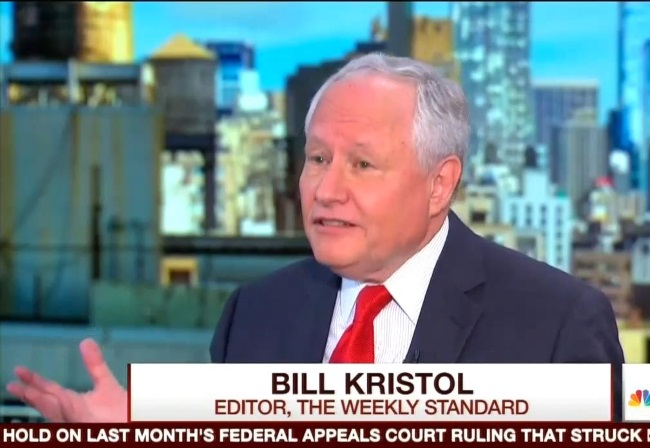 Tell us what you really think, Bill . . . Weekly Standard editor William Kristol has been one of Donald Trump’s harshest conservative critics. He really let it hang out on today’s Morning Joe, calling Trumpism “a new low” consisting of “Third-World, authoritarian, populist, demagogic politics.”

Earlier, Kristol sniffed off the significance of the major shake-up in the Trump campaign, in which Breitbart executive chairman Steve Bannon and consultant Kellyanne Conway have assumed leading roles: “I don’t think it matters, because the problem is Donald Trump.”

JOE SCARBOROUGH: So, what do you think about the campaign shake-up, first of all?

BILL KRISTOL: I don’t think it matters because the problem is Donald Trump. His unfavorable rating has been consistently too high to win a presidential election, and Hillary Clinton’s you’d normally say is too high, but it’s about 10 points lower than Trump’s, and that’s what it’s about.
. . .

ROBERT COSTA: The history of Breitbart is really telling if you want to understand this whole Trump evolution. It started out as an aggregation website closely aligned with the Drudge Report. When Andrew Breitbart passes away, Larry Solov, Breitbart’s friend, and Steve Bannon come in and take over the company. And this is where Trumpism before Trump really starts to marinate. Jeff Sessions is the Alabama senator. He’s constantly publishing op-eds on it. Sarah Palin’s doing interviews with Breitbart. This anti-illegal immigration strain of the right-wing Republican populism starts at Breitbart in 2010, 2011 as part of the Tea Party movement. And that gives Trump a base.

COSTA: The beating heart of Trumpism started at Breitbart.

KRISTOL: But after Andrew’s death just to be clear about that. And again, it’s one thing to be against illegal immigration as a policy matter. I was against the Gang of Eight bill, to say that you should have tougher policies. It’s one thing to say you should have less legal immigration. That’s a serious public policy issue. It’s another thing to start castigating people and defining people by ethnicity, race, religion and so forth. That is trump. Trump in that respect is very different from the Tea Party types. You can criticize them all you want. But most of them were not Trumpites in that respect. Trump is a new low.

WALTER ISAACSON: Because of the racism and anti-Semitism that’s crept in.

KRISTOL: Yeah! And the person denigration of people. It really is Third-World, authoritarian, populist, demagogic politics.

He’s just jealous. Boinie got a lake house out of “opposing” Grandma and he’s still working for a dead end rag.

Oh, but Ye Olde Renegade Jew will put the ignorant white trash in a tizzy with this one!

In all honesty, does anyone at all care what this guy has to say? Is he even important?

His name kept popping up this year because he kept trying to get someone to run against Trump, even after the convention. As far as I’m concerned, he’s just butt hurt since his candidate didn’t win. Might as well put him in the pro Hillary camp too.

The proof that no one cares is that he is on MSNBC saying it.

Would anyone expect Kristol on Morning Joe to laud Trump?

Joe, Bill, Robert, & Walter.
Should I know who any of these people are?
Should I care what they think?
And what is an MSNBC? It sounds like a WW II treatment for gonorrhea.

To Globalist elites – putting your countrymen First is 3rd world populist demagoguery. And, it would only appeal to ignorant little people.

If you oppose the ethnic cleansing of your children, you clearly are motivated only by racism.

Hey, remember the 90’s when we went to war ostensibly to halt ethnic cleansing? Yeah, that was different because shut up.

He’s fighting hard for relevance. It is clear that those in charge of the GOP would rather Hillary wins than listening to their base or any of the independent voters for that matter. They don’t care about the country, the Constitution or the citizens. They care about preserving their little elitist world.

Kristol’s version of Republicanism lost me after Iraq. Like him, I cheered that war on until I had to go there (not as a soldier, spy or merc) and saw first hand the disconnect between the Weekly Standard’s war and the real war. He and the neocon wing were like doctors that misdiagnose a patient. The patient just doesn’t go back.

Bill Kristol “I don’t think it matters because the problem is Donald Trump. His unfavorable rating has been consistently too high to win a presdidential election”

No, the problem is Bill Kristol, the National Review and all the Never Trumpers. They have consistently worked to undermine Trump at every opportunity and then to have the gall to make the above statement is just too rich to comprehend. He is working for a failing website whose readership has plummeted since he ramped up these attacks in April. Is he someone we should pay attention to when he has been wrong so often in his analysis regarding this election and can’t even keep his website afloat?

Now it is too late.

I am a big boy. I already embraced the idea that the next 4 years will most likely suck, and there’s nothing I can do about it.
There is, however, a choice: Will the next 4 years suck Hitlary style or Trump style?
I don’t like Trump, but I am terrified of what Hillary Clinton will do to America.
As a big boy, I have swallow my pride and vote for Trump. I can only hope that in 4 years I can vote for a worthy candidate.

I can also hope that the same self proclaimed Conservatives that showed zero leadership while Obama and his crew destroyed America will now shut up and stop working for Hitlary.

Oh, Oh, Oh, I guess I can’t support Troump now since Billy Boy is against him. He is such a lousy Neo-con. I bet this dad thought of him as the village idiot.

Another Moron Joe story. Kristol must be pretty desperate to show up there. Come on folks, give it up. You lost the primary. Same with LI. Can’t you do better than Joe. Get why not throw some Salon in.

Trump seems to have made a lot of people after thoughts like Faux News talking heads, a bunch of “elite” RNC folks and a whole bunch of special interests.

Glad to see that LI is one of the 5 viewers to MSNBC, Welcome to the fruit nuts. If you really want to trash Trump, why not find it yourself. some good stuff on your own.

I love this line by Trump about Billy Boy:

“I actually feel sorry for him… he’s been doing this for 9 months and he can’t find anybody, what a loser,” Trump said.

I just saw this over at Gatewaypundit.

National Review is way down. Bill Boy is DESPERATE.

LI is going that direction. Pretty soon the only ones here will be an echo chamber of Rags and OnlyRightDissentAllowed. I challenge LI not to run a MJ story for a week. …… ha, you can’t help yourself.

Fitting that you should put Rags and OnlyRightDissent together since both are progressive liberals supporting Hillary for president.

I don’t know who your are, but I do know you’re a lying sack of shit.

The Trumpbarts never disappoint. Thank you all. It was a collective effort.

Just so I’m ahead of the curve, who are we supposed to blame next week and the week after? Still Morning Joe? Sharia Paul Ryan? JFK’s murderer?

“ahead of the curve” is something #neverTrumpers will #neverbe

“I was just being sarcastic!” Sad!

Wee Willie Kristol loves to see kids lives sacrificed for nation-building and playing policeman to the world … as long as it’s not his kids.

Okay Bill, then what’s the solution? Trump is the nominee. No dark horse candidate is going to jump in and win the election so that leaves us Hillary.

Ya’ll gotta start calling Kristol what he is, an elite, liberal globalist.

America first at least for a little while.

About as large as Rinse Prebus’