“And the guy came out, screaming and squalling and running around, about like a chicken with its head cut off” 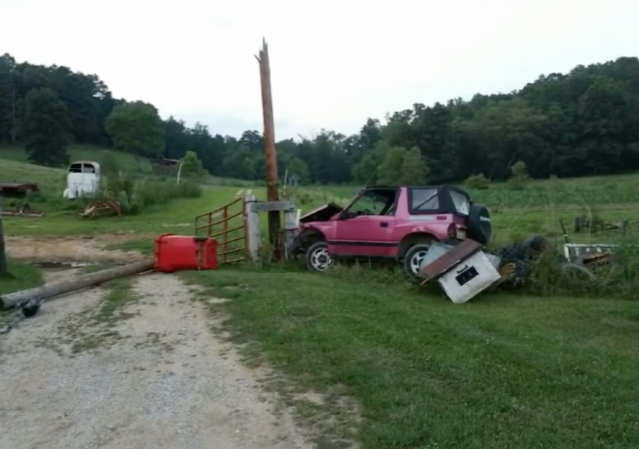 Yes, I know there are more pressing matters in the world, but every now and then it’s worth pausing to reflect upon the fact that in many ways, Darwin was right.

An inebriated Kentucky couple was in for quite the surprise when they happened upon a beehive just after crashing their car through a fence, to be stopped by a utility pole.

But last night, Gary Anderson watched from his porch as a purple Tracker veered on and off the pavement.

“Then he passed probably going about 35-40 miles an hour, pretty fast really. And all the sudden, I heard a big boom,” said Anderson.

He says the driver, Noah Elkins, crashed right into a fence. He hit the utility pole with such force that it’s still in pieces in the field.

But worse for Elkins and his passenger, Priscilla Simpson, he also knocked over a bee hive.

“They said he was hitting things, banging on stuff, throwing his arms up in the air. Screaming and just making a really big scene,” said Deputy Gilbert Acciardo with the Laurel County Sheriff’s Office.

Anderson says Elkins ran into his yard and started spraying the hose on himself and Simpson.

“I didn’t know what he was doing, but I told him he needed to get out of that water. I didn’t know he was getting eaten by bees, I thought he was just high,” said Anderson.

Once ambulances arrived, Simpson told police that they in fact had taken several pills before getting on the road. They had gotten on that road because they were trying to find a swimming hole, which was miles away.

“I think they learned a valuable lesson. Hopefully not to drink and drive, and even more than that you don’t disturb a hive of bees,” said Acciardo.

Anderson guesses that more than 300 swarmed the couple when they first crashed, which is why instead of jail, they went to the hospital.

Almost worthy of some kind of Darwin award.

JackRussellTerrierist in reply to legacyrepublican. | August 3, 2016 at 12:22 pm

If they’d been African-American bees, there’d be two fewer morons to contend with.

The premise for the Darwin Award is reserved for those who take themselves out of the human gene pool in the most spectacular fashion possible: they did not.

According to legend, these awards are usually posthumously awarded, although there IS one dubious story regarding a man who discovered that a .22 round could physically replace an old-style fuse … until it heated up enough to go off and (fortunately) eliminated that man’s ability to father future generations of Darwin Award nominees. This couple didn’t even eliminate future possibilities.

This trick worked a lot better in Tommy Boy.

Wow. A Tracker! How many of those are still on the road? A few more years, and that POS would be a classic!

How many of those are still on the road?

One less than there were a few days ago.

(I already considered it a rarity if not a classic — I hadn’t seen one in a lonnnng time.)

That’s the first thing I thought too. Wow, A tracker. It looks like it was in pretty good shape too. Around my area they all dissolved long ago.

Now that I’ve stopped laughing, sending a thank you for that excellent wordplay, wombat!

It’s a good thing that pole was there to stop them in their Tracker.

Should have put that part about the purple tracker in the headline.

Hillbillies. Kentucky has some of the worst, and most of them are on meth.

I could barely understand that witness and really didn’t get everything he said. Lucky me.