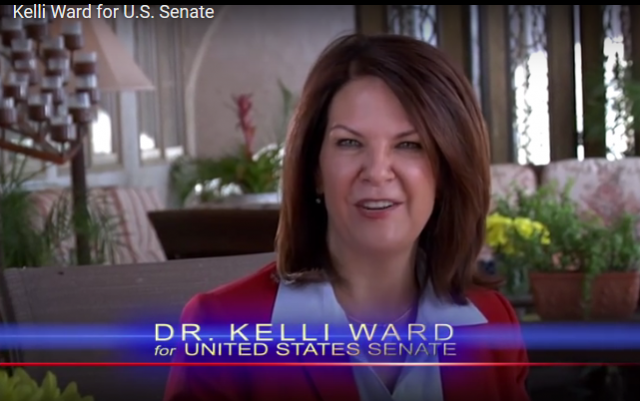 While Americans are justifiably focused on the fascinating presidential campaign, there is a U.S. Senate primary in Arizona coming up on August 30th that could use a bit of attention.

Republican Senate primary voters are currently split between several candidates. One of the better positioned hopefuls, Alex Meluskey, has just dropped out of the primary. The biggest beneficiary of this development is a vibrant challenger, Dr. Kelli Ward.

A Public Policy Polling survey of the Republican Primary showed former State Senator Ward tied with McCain 41-41 head-to-head but trailing 39-26 when three other candidates were included in the poll. One of those three candidates, Scott McBean, failed to turn in enough signatures to make the ballot. With Meluskey’s campaign suspension, only perennial candidate Clair Van Steenwyk remains. Van Steenwyk polled last in the PPP survey with just 2 percent compared to Meluskey’s 4 percent and McBean’s 3 percent. Van Steenwyk isn’t expected to rise above low single digits.

…[Public Policy Polling]’s new Arizona poll finds that John McCain has a negative approval rating with Republican primary voters, and is at pretty serious risk of losing nomination for another term. Only 35% of GOP voters approve of the job McCain is doing to 50% who disapprove. He’s in particularly poor standing with conservative voters. Among ‘somewhat conservative’ voters his approval spread is 33/52, and among ‘very conservative’ voters it drops all the way down to 18/67. McCain is polling at only 39% in the Republican primary field.

For those of you who worry that Ward is not a serious candidate, let me put your mind at ease:

In addition to being a physician in private practice, she also has political experience as an Arizona State Senator. While campaigning, she continue to practice medicines in emergency departments in Lake Havasu City and Kingman.

Her positions are solidly conservative, tempered with real-life experience. As an example, here is a sample of her proposed Patient Power Plan for American healthcare.

All Americans without employer provided health insurance would be eligible for a health insurance tax credit equal to $2,500 per person, $8,000 per family of four, which would effectively extend the tax preference for employer provided health insurance on equal terms to everyone. Workers would be free to use that tax credit for the purchase of any health insurance in the market of their choice, including Health Savings Accounts (HSAs). The credit would be refundable and payable monthly so that even those with little or no tax liability would receive the full amount of the credit which they can use to help pay their insurance premiums. This reverses power and control over health care and insurance from politicians and bureaucrats in Washington to working people all across America.

More recently, Ward slammed McCain for taking a jab at Donald Trump for making comments about Gold Star father and DNC speaker Khzir Khan. While McCain understandably doesn’t much care for Trump, and Hillary Clinton has referred to the Arizona senator as “her favorite Republican,” inserting himself into the press-inspired controversy seems unwise.

Trump has a solid lead over Clinton in Arizona polls. Additionally, it turns out Khan isn’t just your average Gold Star parent; he has ties to the Clinton Foundation and to controversial immigration programs.

And while it is tragic that Captain Humayun Saqib Muazzam Khan was killed in service to this nation, Trump also referred to him as a “hero“, which is not a point our elite media has cared to make. Furthermore, Trump has been on the forefront of veteran’s issues, whereas Clinton will likely carry out Obama administration practices such as allowing inept Phoenix VA bureaucrats back after their suspensions.

However, no matter where you stand on Donald Trump, the fact is that John McCain has long passed his “sell by” date and Kelli Ward looks well positioned to win the primary. If you are an Arizonan, please vote for her.

Being in Florida and finding out Rubio is campaigning for Trump I called his office to let them know I will not vote for him. If I were in Arizona that is now my line to be crossed. Anyone who supports Trump won’t get my vote. Question remains will I vote for the dems running against republicans who do.

So what you are saying is that you stand with Hillary? Good job.

Rubio is being a man in honoring his pledge to support the party’s eventual nominee, no matter how tepid his support has been. Obviously you’d rather have Hillary in office than a man of honor in the Senate.

I’m sure that crazy Alan Grayson is more your speed.

I’m in Arizona, and I’m voting for Dr. Ward. And if McCain is in the general, he won’t get my vote. I’ll write in an actual conservative.

I’ve had more than enough of McCain’s BS. He is worse than a Democrat.

I’m done with McCain. I’ll be voting for Dr. Ward also, if she doesn’t make it I’ll vote for the DEM just to try and make sure McCain doesn’t get another term. If the DEM wins it’s really no difference than having McCain in there anyway.

Been banned from any other websites lately, libby?

Don’t forget the other biggie. Paul Ryan next week. The last poll about a month ago showed him losing ground, then things got quiet. Hmmm. Wonder if that says anything.

Ummm… Like him or not, Paul Ryan’s not a Senator. He’s the Speaker of the House.

You’re not understanding: if Ryan – and the likes of that backstabbing rino – loses in the primary, he gets replaced by a REAL Republican, who will likely go on to win the election.

Looks like I’ll be contributing to Kelli Ward as well as to Nehlen, Ryan’s primary opponent…

I have been regretting my vote for my hero Barry Goldwater’s replacement for years.

I was so hopeful back in the 80s that McCain was going to continue Goldwater’s conservative record.

If McCain loses the primary, I predict he wastes no time in endorsing Hillary. One of his former top aides, Mark Salter, has already endorsed Hillary. So has McCain’s granddaughter.

But I doubt McCain will lose the primary. Arizona Republicans always reward him for his efforts to pull the country leftward, whether it was partnering with Ted Kennedy on immigration or Russ Feingold on regulating political speech.

He should have been sent packing decades ago. Do it now and I am almost positive he endorses Hillary. Puts the Trumpkins in a tough spot.

edgeofthesandbox in reply to MaggotAtBroadAndWall. | August 2, 2016 at 4:23 pm

Fair chance of him

Fair chance of him winning the primary.

If McCain loses the primary, do you think the GOP will support Dr. Ward, or will they pull the shame shitty trick they did in the LA and VA governor’s races?

Any year but this I think they would have pulled their nasty tricks, but this year it is possible that they might not want to rile the base more than it already is. Even without McCain, they have McConnell and Graham and a few other squishes at the top making sure the Senate follows the crony course.

Leslie, your link doesn’t show Trump’s “solid lead” in AZ. In fact, it’s Clinton +.5 and the two featured polls are over a month old.

Leslie,
The two polls on RCP are from June and we’re done in AZ (is RCP hiding something?) Your link is about the late July Reuters poll that, I assume, was a general election poll.
I remember reading about the AZ race about a month or so ago and how unbelievably close it was. I clicked on the link because it contradicted what I knew.
I remember reading about the poll bias in 12, when the polls turned out to be spot on (they weren’t in 14). Don’t you think that people who tell you to not believe the polls have their own self-interest in you believing that the polls are skewed?

I’ll just bet that her campaign is “self-funded”, too.

Nope. No money “buying” her.

I’m in Kansas, and the sheer volume of establishment money poured into the House race is staggering. The GOPe has opened all the stops to get Huelskamp defeated. You can’t open a web page, listen to five minutes of radio, or open your mailbox without a Marshall ad jumping in front of your face. All of the ‘usual suspects’ are pouring in their support, from the Chamber of Commerce to various newspapers, and the polls still show the two of them in a dead heat.

I like Huelskamp. He makes the right people mad. 🙂

When McCain met with Cindy Sheehan I left Republican party and became an Independent. Time for him to retire. Will vote for Ward.

That evil Donald Trump. Once again his campaign is plagiarizing!
This time it its Trump plagiarizing Ryan. When asked if he would endorse Ryan, Trump said, “I’m not there yet.”

And Ryan fired right back he didn’t care if T-rump endorsed him or not.

Apparently, neither do the people of his district.

Why was simply meeting with Cindy Sheehan such a sin? She lost a son in a war that should never have been fought.

I am sure McCain did not agree with her. Do we only meet with people we agree with?

I have voted for McCain for the last time. I will be voting for Dr. Kelli Ward in this election.

John McCain’s Best Before Shelf Date was up way before McCain’s The Incumbent Protection Act. Why did his state keep inflicting him upon the USA?

If McCain and others lose in the primary or election, you can be sure the dems will do everything they can in the lame duck session to get a vote scheduled for Garland’s nomination. No one abuses the wishes of the voters like a losing politician.

If Hillary “The Liar” Clinton is elected, it won’t matter. She will load the Supreme Court will liberals that will change this country like nothing else. That is the real impact I think this election will have. I guess we could all move to New Zealand!