Hot Air and Mixed Messaging from the Obama Administration

Hot Air and Mixed Messaging from the Obama Administration

Legal Insurrection readers may recall our report that Secretary of State John Kerry asserted that air conditioners and refrigerators pose as big a threat to “life on the planet” as the threat of terrorism.

Know who didn’t get the memo?

President Obama. Our Commander-in-Chief just suggested their use in this country’s fight against Zika (hat-tip Tammy Bruce).

In his weekly address released on Saturday, President Barack Obama criticized the Republican Congress for not assenting to his request for “emergency resources” to “combat Zika,” and said that Americans should protect themselves from the virus by, among others things, “using condoms properly.”

“Because Zika can be spread through unprotected sex, it’s not just women who need to be careful–men do too,” the president told the nation. “That includes using condoms properly.”

Of course, given Obama’s notorious absence from security briefings and his penchant for golf, no wonder there is now mixed messaging on the danger of air conditioning!

At the beginning of the month, I noted the petition to remove air conditioners from State Department offices was signed by over 40,000 people. It is now about 5,000 short of its 50,000 signature goal.

I guess we should stop signing at this point!

Meanwhile, new reports indicate that hearing loss is now recognized as a potential birth defect when pregnant women are infected with the pathogen.

Recognizing the link to mosquitos and Zika, and the virus’ impact on fetuses, The Wall Street Journal did a detailed review of the U.S. locations that are prime spots for the vector and the population density of women within child-bearing age: 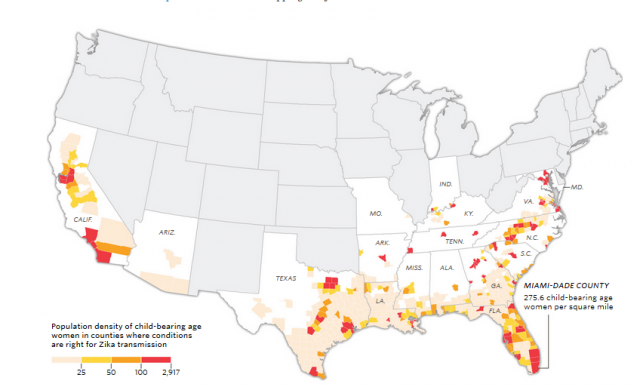 These locations seem like good places to have air conditioning.

So, given the risks of Zika and terrorism, versus the risk of global warming, the question to ask is: To air condition or not air condition.

As for myself, I will crank up the A.C. and pour myself a tall, cold glass of craft beer.

The typical Democrat voter will believe both Kerry and Obama simultaneously and have no problem doing so.

Our country has zika of the psyche.

WASHINGTON (AP) — The White House Thursday promised that President Barack Obama would veto the long-delayed response of the Republican-controlled Congress to the president’s request for fighting the Zika virus, saying it provided too little money and contained too many partisan provisions. (hint, not enough money for democrat partisan issues)
————–
The $1.1 billion measure had already appeared sure to die in the Senate next at the hands of filibustering Democrats backing Obama’s $1.9 billion request and opposing spending cuts that House Republicans added to the measure.
——–
The Zika plan came out late Wednesday and won approval in the House hours later. That vote came amid a Democratic floor protest of GOP inaction on gun legislation.
————–
Democrats also said it was wrong to require spending cuts to pay for a response to a public health crisis while not requiring them for past emergencies such as wildfires, floods and Ebola. (repubs learned from obama, never let a crisis go to waste)

Perhaps the media would do us all a service if they didn’t cover it quite as much. People wouldn’t know what’s going on.

This must be the most stupid statement to ever come of of the mouth of any politician.

It may be stupid to come out of their mouth, but you know that is what runs through their heads.