“What is the most meaningful conversation you’ve had with an African-American friend?” 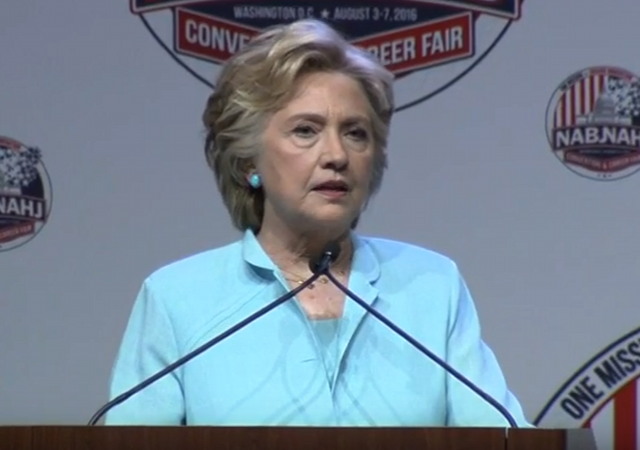 Hillary Clinton gave her first press conference since December of 2015 on Friday which was open only to journalists of color.

While she did get at least one question about her ongoing email troubles, the event devolved unsurprisingly into a campaign rally.

Reporters Raucously Applaud Hillary, Softball Questions to Her at Their Own Conference

Showing how much the liberal media is in the tank for Hillary Clinton in this election, reporters at the joint conference of National Association of Black Journalists and National Association of Hispanic Journalists on Friday afternoon wildly applauded Clinton’s far-left answers to a slew of softball questions about immigration, the electorate, and even whether she has any black friends.

All throughout, the journalists behaved like tried and true lapdogs providing a flew of cheers at certain points in her answers with the worst being when Clinton flaunted her supposedly high approval ratings when she left her position at the State Department.

Montenegro returned later for another question about Latinos not being taken advantage of by Democrats, but the fawning question of the day would go to Kevin Merida of ESPN’s The Undefeated site about black friends: “Madam Secretary, Kevin Merida editor and chief of The Undefeated at ESPN. What is the most meaningful conversation you’ve had with an African-American friend?”

NewsBusters put together this reel with some choice clips:

At the end of the day, no one was impressed. Even the liberal site Slate criticized the event:

Hillary Finally Gave a Press Conference. It Was a Master Class in Obfuscation.

On Friday, Hillary Clinton took questions from the press for the first time in 260 days. A number of her answers revealed why she doesn’t hold press conferences more: Her answers to both difficult and easy questions were often evasive, excessively legalistic, and frustrating to watch.

In Friday’s press questioning, the trouble began when she was asked her first question about her private email server and recent statements about that server which independent fact checkers have labeled as categorically untrue. Clinton’s responses here—and her previous responses to questions about the truthfulness of past statements—are so overly legalistic and convoluted that they are difficult to even explain.

If you want the media to hold our next president accountable, vote for Trump.

What a National embarrassment !

Could we ever have a National Association Of Ethical Journalists ?

There aren’t enough of them to start a National Association.

There might not be enough to fill a phone booth.

If this is her version of a press conference, I have to wonder what the debate(s) will look like… I don’t think she fooled anyone.

She’s not nearly as good as Bill, but she has learned from the master. And has always been less than honest with her answers.

Remember her “pretty in pink” presser on Whitewater/Rose Law Firm issues early in the first term? One question contained a direct allegation; Hillary answered, “There’s been no evidence of that,” rather dismissively, and turned to the next question.

Think about it: no denial at all, not even a qualified one! Just basically saying, “You got nuttin’ on me, copper!” And yet, she’s skated by for decades, crooked to the core.

Now, if the debates concentrate on her record, she’d be in trouble. They won’t, and anyone who thinks they will is dumb enough to vote for Trump.

On policy, she can demonstrate enough detailed knowledge (worthless as her ideas are) to show Trump to be woefully ignorant. So those will be the questions she – and he – gets asked.

I look for the recurring theme for the debates to be “Trump’s picking on H->illary! ’cause she’s a gurrrl!”

The media aren’t even pretending anymore. They’ve completely dropped the cloak. This election season has been particularly ridiculous — more and more people are finally seeing them for what they really are.

Sad commentary on the state of things that these two organizations even exist. The notion of identity-based journalism is absurd and abhorrent. The great victories in achieving equal treatment before the law of the 1960’s have been squandered, mostly by their beneficiaries. Color of skin trumps content of character routinely in our society (the Freddie Gray case, just one example). Especially for the ‘favored’ colors. Even Asians have succumbed – The Asian American Journalism Association is a thing. Tribal solidarity is splitting apart the very concept of shared values upon which American society was founded. Rodney King’s lament was dead on, unfortunately.

The Balkinization of the US is part of the long term ‘divide and conquer’ strategy for defeating the US without firing a shot.

That “lament” did not come from Rodney King. He was too tweaked on LSD to comment.

More plants than a greenhouse.

Hillary is soooo evasive that ….

Hillary is sooooo evasive that if she dialed 911 to report a terrorist attack she would get Hamas instead.

Feel free to come up with some of your own ….

Hillary is sooooo evasive that after her last dental exam she told the press that her toes got a clean bill of health.

Hillary is sooooo evasive that when someone told her a blond joke she laughed.

Hillary is sooooo evasive that when she heard that she had a lead in the polls that she called the EPA to report it as a health hazard.

Hillary is sooooo evasive that when she was asked by the press what she thought of her child Chelsea she said she was proud of all her children.

Anyone else think that bobblehead action was even more distracting than Obama’s teleprompter reading in his first term when he looked like he was watching a tennis match?

Nobody threw the other shoe at her yet?

Hmmm … the most meaningful conversation I ever had with a Black Friend™ was about a word in the Daily Jumble.

He figured out the word before I did.

It’s tough being a lib journalist. The questions have to be designed so they are innocuous and the lies she replies with are innocuous.