After Juanita Broadrick’s viral tweet that Bill Clinton raped her.

There is one part of the Buzzfeed article which is news in itself.

Hillary (in)famously stated on Twitter, and a campaign video quoted on her website, that women who allege sexual assault “have the right to be believed.”

In light of the accusations by Broaddrick and others such as Paula Jones, Hillary’s comment was the focus of much mockery, including our tweet of a previous A.F. Branco cartoon: 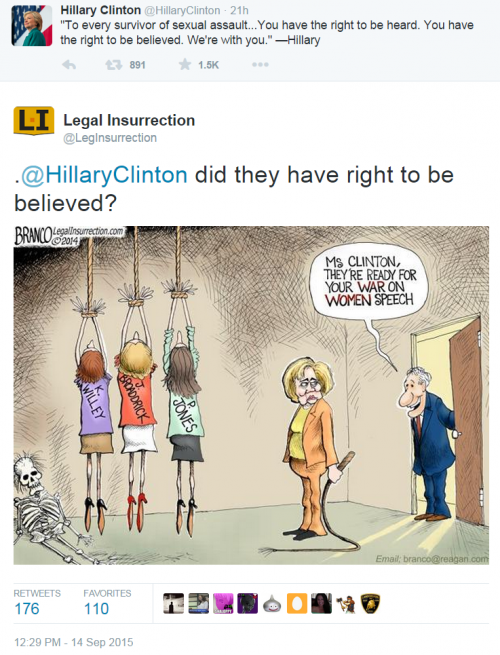 Broaddrick tweeted on January 6, 2016 about the rape, and the tweet went viral (it currently has over 46,000 retweets):

I was 35 years old when Bill Clinton, Ark. Attorney General raped me and Hillary tried to silence me. I am now 73….it never goes away.

The Buzzfeed article documents that after that tweet, the Clinton campaign quietly removed the language about women alleging sexual assault having “the right to be believed”:

Another redditor pointed out that Hillary Clinton’s campaign website appeared to have made some edits to its “campus sexual assault” page. Last winter, website archives show, a September 14, 2015, quote from Hillary ran across the top:

In February, shortly after Broaddrick’s viral tweet made headlines, the line “you have the right to be believed” was cut from the text. A video of the full remarks, that line included, is currently on the page. The Clinton campaign declined to comment on the change.

So when you consider the Broaddrick allegations, who you gonna believe?

Hillary is deceptive and untrustworthy. Trump is mercurial and a “loose cannon.” Maureen Dowd considers Hillary is “The Perfect G.O.P. Nominee.” (http://www.nytimes.com/2016/08/14/opinion/sunday/the-perfect-gop-nominee.html?_r=1a) Trump is the perfect Democrat nominee in the sense who wouldn’t want to run against a candidate who is sabotaging his own campaign.

Shortly after Labor Day, Mr. Trump ought to withdraw and seek to have Mike Pence delegated as the GOP Presidential candidate. It would set Team Hillary off balance, gain considerable support I believe, and earn the gratitude of any number of people. I Like Mike!

What’s a “Mike Pence”? I don’t recall ever hearing about him before Trump picked him for VP.

/360 million people and this is the best we can do?

These might give you an idea.
Indiana Governor Mike Pence:
http://bioguide.congress.gov/scripts/biodisplay.pl?index=P000587

Well, up to a point.

It IS Hellary. She’ll betray anyone.

There must be another bimbo eruption on the horizon…

Good point. Wouldn’t it be ironic if the October surprise that Bill has been caught on tape humping Huma?

I’m predicting two things about that: (1) It wouldn’t be a recent tape and (2) Bill could hump Mother Theresa’s rotting corpse on live TV without negative effects. Matte of fact, there would be people lined up to hold his jacket. Commentary would include “I say she was just asking for it; did you see how that bitch was dressed?

Curse you. Curse you with a deep, dark curse…