‘Hillary Did It Too’ Defense Fails, Sailor Gets Jail for Submarine Photos

‘Hillary Did It Too’ Defense Fails, Sailor Gets Jail for Submarine Photos

Soldier not above the law, though possible future Commander in Chief seems to be. 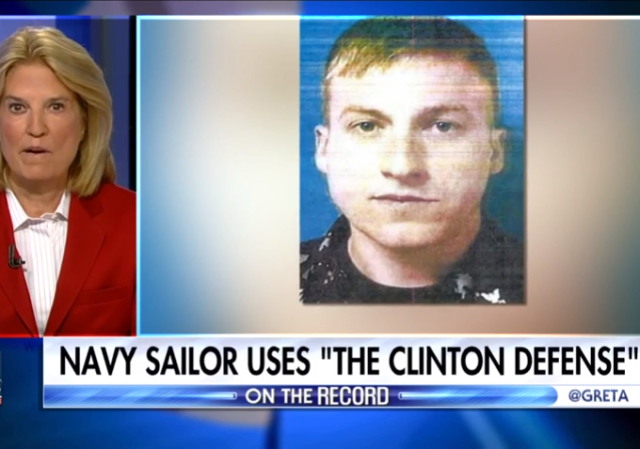 Earlier this week, we highlighted the case of a sailor in the U.S. Navy who was being prosecuted for using his phone to take pictures in a nuclear submarine. His lawyer cited Hillary Clinton as a defense.

At the time, I said:

Cases like these highlight the growing feeling among many Americans that there are two sets of rules in this country and that some people are above the law if they have the right connections.

Unfortunately for the sailor, the Clinton defense didn’t work. U.S. News and World Report has the story:

Sailor Denied ‘Clinton Deal’, Gets 1 Year in Prison for 6 Photos of Sub

A former Navy machinist mate who admitted taking photos inside a nuclear submarine was sentenced to a year in prison Friday, with a federal judge rebuffing a request for probation in light of authorities deciding not to prosecute Hillary Clinton for mishandling classified information on a private email server as secretary of state.

Kristian Saucier’s attorneys argued in a court filing last week that Clinton had been “engaging in acts similar to Mr. Saucier” with information of much higher classification. It would be “unjust and unfair for Mr. Saucier to receive any sentence other than probation for a crime those more powerful than him will likely avoid,” attorney Derrick Hogan wrote.

U.S. District Judge Stefan Underhill sentenced Saucier to one year in prison and a $100 fine, along with six months home confinement, 100 hours of community service and a ban on owning guns, his legal team says. Prosecutors had asked for six years behind bars.

Rinckey says he’s not sure if the judge was swayed by significant media attention comparing Saucier’s case with the Clinton email controversy.

Politico notes an interesting aspect of the judge’s decision:

Rinckey said the judge didn’t believe Saucier’s actions were part of a nefarious scheme, but did believe they needed to be punished.

“He did not buy into the government’s sky-is-falling theory, [but] said he does have to send a message to other Navy and military personnel that classified information needs to be handled appropriately,” the defense attorney said.

So, members of our armed forces must be “sent a message” about things like this? What about people running to be Commander in Chief?

Here’s a video report from Wochit News which provides a little more background:

He should have donated to the Clinton Foundation.

The (S)he did it too, defense never works.

While I agree with you, doesn’t this fly in the face of the Eighth Amendment

“Cases like these highlight the growing feeling among many Americans that there are two sets of rules in this country and that some people are above the law if they have the right connections.”

That’s a feeling that goes way back in our nation.

A fellow member of Congress caned Senator Charles Sumner in the well of the Senate nearly to death. It took Sumner years to recover. There were no charges and no repercussions that I recall.

More recently, everybody knew who and what Al Capone was. He was hardly covert about his gangster activities. Part of the reason he went so long without being prosecuted was popular support, and his connections in political circles.

None of which suggests the conditions of today are tolerable. They aren’t. But they aren’t new, either.

No they’re not. But that doesn’t mean we can’t strive for better instead of excuse the powerful.

As I said. The idea of “badges of nobility” can be found in the Constitution, and it directly addresses the idea that this was to be a nation of laws, and not of men (or corrupt women).

There’s a new element though.
Now Al Capone is running for president.

I think it’s a real shame caning Senators went out of style.

What confuses me is that this is a civilian Federal case. Shouldn’t this have been discharged via court-martial?

Does anyone have any information why this was handled this say?

The statues in play here are Federal, part of USC, and not part of the UCMJ, which is the jurisdiction of the courts marshal.

I gave you a thumbs up because as the “fact checkers” at the WaPo would put it you are “literally correct.” But I’ve got to pipe up and point out that the classification of the information he admittedly did compromise was CONFIDENTIAL/RESTRICTED. This is at the low end of classified. One classification level by DoD, CONFIDENTIAL, the next by the DoE’s (Energy’s) Nuclear Regulatory Commission, RESTRICTED.

Having gone the lone way around the barn, the original calls for this guy to spend five or six years in prison were ridiculous.

This is literally the one crime the government can deny access to potential reoffenders. It’s so freakin’ simple. And, given the sentence of one year confinement, I would suggest the defense request for probation was not out of line. I continue, to this day, to think that fines, community service, and probation would have been appropriate in this case. Moreover, NJP should have been the course pursued.

I’ve been saying from the start that DoD sends peeps to prison for violating 18 U.S.C. 793(f). It’s not part of the UCMJ but so what as because just because you are DoD doesn’t make you immune federal law?

And Comey’s speech was entirely BS. Yeah, right. Complete garbage. Comey could have found plenty of willing and eager prosecutors who would have gone forward with the case. Had his masters let him look.

His speech was garbage as long as you didn’t look at the lawyers he had to work with. Then yes. But why should the FBI director give them cover? Let them whore themselves, not the FBI.

I need to correct myself. I’ve been saying from the start that the government needs to PUNISH people for violating 18 U.S.C. 793. Or any other statute, law, element of the UCMJ, what have you, comprising the Espionage act or its predecessors. Literally, loose lips sink ships.

“For conspicuous gallantry and intrepidity at the risk of his life above and beyond the call of duty as Commander of a Submarine Coordinated Attack Group with Flag in the USS SCULPIN, during the Ninth War Patrol of that vessel in enemy-controlled waters off Truk Island, 19 November 1943. Undertaking this patrol prior to the launching of our first large-scale offensive in the Pacific Captain Cromwell, alone of the entire Task Group, possessed secret intelligence information of our submarine strategy and tactics, scheduled Fleet movements and specific attack plans. Constantly vigilant and precise in carrying out his secret orders, he moved his under seas flotilla inexorably forward despite savage opposition and established a line of submarines to southeastward of the main Japanese stronghold at Truk. Cool and undaunted as the submarine, rocked and battered by Japanese depth charges, sustained terrific battle damage and sank to an excessive depth, he authorized SCULPIN to surface and engage the enemy in a gunfight, thereby providing an opportunity for the crew to abandon ship. Determined to sacrifice himself rather than risk capture and subsequent danger of reveling plans under Japanese torture or use of drugs, he stoically remained aboard the mortally wounded vessel as she plunged to her death. Preserving the security of his mission at the cost of his own life, he served his country as he served the Navy, with deep integrity and an uncompromising devotion to duty. His great moral courage in the face of certain death adds new luster to the traditions of the United States Naval Service. He gallantly gave his life for his country.”

I have been saying, consistent with current law and common sense, a RANGE of punishments is appropriate. Because good people &^%$ up. And some people are selling influence. And still others ares spying.

Some peeps need to be crushed. Others don’t.