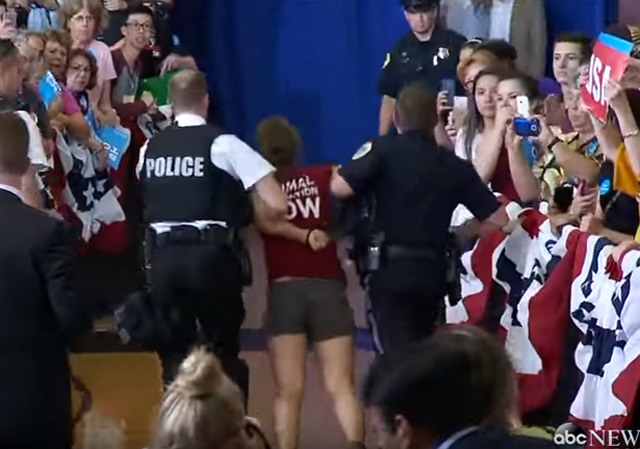 Hillary Clinton was rushed by an animal rights protester during a campaign event in Iowa this week. The protester, who was a young woman, was taken down by Secret Service and carried out of the venue by police.

A woman was tackled by security as she was trying to rush the stage at a Hillary Clinton rally in Des Moines, Iowa, on Wednesday.

The protester was quickly removed from the event.

The woman, protesting on behalf of animal rights, tried to rush onto the stage during a rally at Lincoln High School, but, struggling, was escorted, out by security.

The woman who jumped the barrier was Kelsey Atkinson from Direct Action Everywhere, an animal rights organization. https://t.co/dh1hqt1XG8

As you’ll see in the video below, Hillary turned this into a lame joke about people getting carried away.

Hillary Clinton was surrounded by Secret Service agents Wednesday afternoon after a protester broke past barricades separating the Democratic nominee from the audience at a campaign stop in Des Moines, Iowa.

Agents tackled the protester, who wore a shirt that read “Animal liberation now” and is a member of the animal rights organization Direct Action Everywhere, in a buffer zone surrounding the stage.

The protester, identified afterward as Kelsey Atkinson of Chicago, was then led out of the gymnasium where the rally was held.

It was the second time in less than a week that Clinton’s security detail came to her aid. Last Thursday in Las Vegas, a group of protesters also from Direct Action Everywhere attempted to enter the area around the stage, prompting agents to move to her side.

One things for sure.
The woman protestor wouldn’t have much difficulty getting through the “crowd”, given it’s a Hillary rally in a high school gym.

Hillary Clinton was rushed by an animal rights protester during a campaign event in Iowa this week.

This woman will be a hero next week, when the Dems realize they could have a huge pool of potential animal votes when voting rights have been granted along with ‘animal rights’.

Chicago? If 0bama had a daughter………

Gee, I wonder if this was arranged by Hillary’s campaign in advance, so she can say that it happened to her, too?

When will we have a Hillary supporter “attack the stage” wearing an AR-15 T-Shirt just so they can denigrate gun-totin’ republicans as the evil enemies?
They could get weeks of CNN-focused publicity out of such an event.

Don’t think they haven’t thought of it.

Seen the size of hateful hillery’s derriere? Maybe a vegan diet is what she needs to pander to that crowd.

If I have a nightmare tonight, my lawyer will be in touch.

The crowd in this video sounds exactly like a thin on the ground not many people there kind of crowd YET you listen to the Donald’s cried cheering and it’s completely different! His crowds SOUND like the kind if noise lots and lots and lots of people would make.

Where’s the big black dude with the injectable diazepam? Are they keeping him under wraps for awhile?