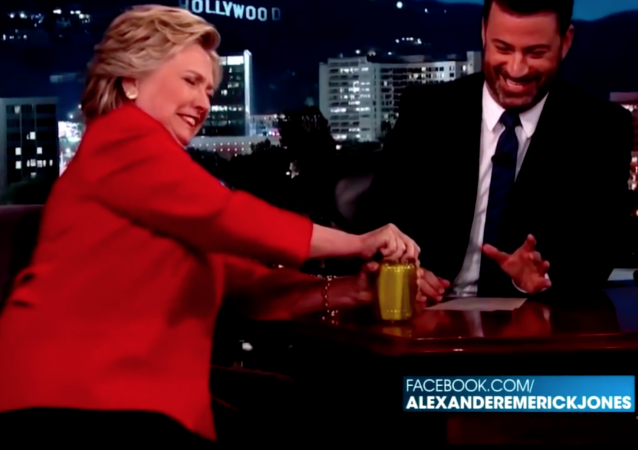 Increasing attention to what onlookers suggest could be serious health issues led Kimmel to challenge Hillary with a presidential competency test — opening a jar of pickles.

Hillary succeeded in opening the jar of pickles all on her very own, only for pickle truthers to question the veracity of the Kimmel/pickle challenge. The largest detractor was conspiracy monger, Alex Jones.

So, Kimmel took seven minutes out of his show to expose the truth behind Pickle Gate.

The whole ordeal is hilarious.

But for all the media wagon circling, speculation of Hillary’s alleged health issues hasn’t gone away. If anything, it’s become a full blown campaign issue. The more they doth protest, the bigger, and more questionable the issue becomes.

Yeah, the things we miss by having actual elections, instead of wielding supreme executive power just because some watery tart threw a sword at a candidate.

Ssshhhh! You’ll blow the lid off of this story.

Help! Help! I’m being repressed! Come see the violence inherent in the system!

“but you have to remember that a worm… with very few exceptions… is not a human being.” [seemed like a good day to quote someone in response]

“You may not like pickles, but after all, it’s the only thing you can do with cucumbers.” -The Children’s Garden of Grass

I’m afraid all this stunt has done is get Hilliary in a pickle.

Nope. Not goin’ a touch this…

How about a nice cigar?

The only way to settle this is to have a jar opening contest between the candidates rather than a debate!

What, Kimmel had a non-union person open a jar of pickles on stage? Man, he’s in for it now …

There still wasn’t a pop of the pickle jar…

All of this is a distraction from HRC’s apparent health issues and what better way to derail any questions around her health than to belittle those asking the questions.

Far easier to avoid this issue when the mfm has your back then to actually be truthful and honest with people (I know, there is always a first time even for HRC :)).

“By the time we’re finished, people are going to wonder whether Willie Horton is Dukakis’ running mate.” That’s a quote from Lee Atwater, the first Bush’s campaign manager. That’s how you win elections – focus your attention on key issues that make your opponent unelectable.

Trump is doing the opposite by focusing on Hillary’s health. All she has to do to win the issue is open a jar of pickles. Not too different than Trump jumping on board the birther movement, where in order to win and make Trump look like an idiot, all Obama had to release his birth certificate.

And now, on Trump’s next campaign stop, someone’s surely going to give him a jar of olives or salsa that’s been in the back of the fridge for a month.

How about this, we all can go back to opening our jars by running them under hot water, and maybe Trump can focus on Bengazi or Obamacare or the Iran prisoner deal or anything else for a week or two without getting distracted.

Alex Jones is credentialed to cover Trump events. The Washington Post is not.

Jones is a loon, but still more credible than WaPO.

She looked so presidential! After seeing that display of strength I doubt that we will see any more pics of a bare chested Putin. (Hopefully we won’t see any of her bare chested either. )

Makes me want to run out and vote #NeverTrump!

The pickle jar popped loudly when Jimmy’s sidekick opened it.

Pickle Smickle….. nothing but a Cuke in fancy dressing

So…. Kimmel admits that the pickel jar was “rigged” for Hillary. No pop. Did you notice that he blames it on the janitor? First the lie that Hillary could open a jar of pickels herself, which was pretty obvious but duped the audience filled with, shall we say, low-information New Yorker types in the tank for Hillary.

Now the second lie: that it was NOT a Hillary staffer, or someone high up on Kimmel’s production team. Blame the janitor, the little guy, the audience is stupid.

Who is racist in this one? I am so tired of this arrogance.

It is not important whether she can open a jar of pickles or walk up the steps without help. Roosevelt couldn’t walk anywhere, but that did not interfere with his ability to think.
What disturbs me about Hilary is that there are times when she appears to be out of it. I am concerned that she is suffering from brain damage. We need a president who is mentally competent.

And yet she’s not out and running around the country electioneering as most candidates would be doing. Small groups of wealthy friend fund raisers with no record of what she’s promising for those “donations”.
She hasn’t had a real press conference in almost a year.
Rush said it best – When she’s out speaking in public her numbers go down.
Hide hateful hitlery, hide.