Hillary Ad Tries to Scare People About Trump: But Will It Backfire?

Hillary Ad Tries to Scare People About Trump: But Will It Backfire? 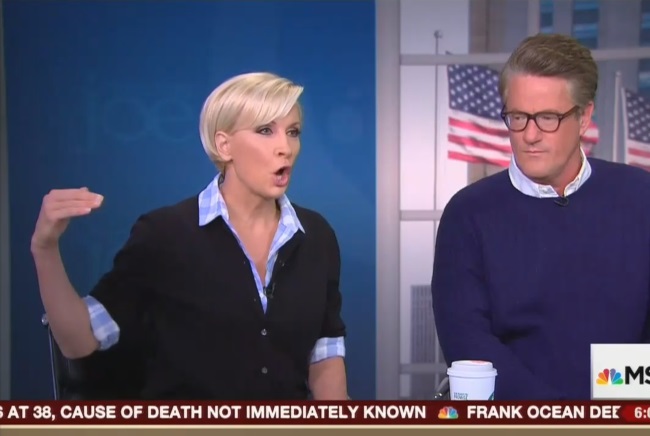 Will Hillary Clinton’s latest ad, which attempts to scare people about Donald Trump when it comes to national security, actually wind up winning him votes? Today’s Morning Joe opened by playing the ad, which features clips of Trump making various bellicose statements, e.g., “I would bomb the s— out of them.”

Mika Brzezinski found the ad “very strong: it tweaks on every level.” Better than twerking on every level, we suppose. “It’s scary,” said Mika as, in a bit of unintentional humor, she imitated the “whoosh” sound of the fighter jet at the end of the ad. But query: could the ad wind up winning more votes than it loses him? After eight years of “leading from behind,” of foreign policy disasters from Russia to Syria to Libya to Iran, could America be ready for a blunt-talking president? Remind me: who was the president who, speaking of the Cold War, said “we win, they lose?”

Check out the video and the screencap for Mika’s imitation of that fighter jet!

So . . . what do readers think? Will Hillary succeed in scaring voters, or will at least as many think, yeah, after Obama/Clinton, we could use a kick-butt president?

DONALD TRUMP: Knock the crap out of them, would you? Seriously.

TRUMP> I know more about ISIS than the generals do, believe me.

TRUMP: And you can tell them to go [bleep] themselves.
—
AD: Because all it takes is one wrong move.

TRUMP: I would bomb the [bleep] Out of them.

JOE SCARBOROUGH: What do you think of the ads?

MIKA BRZEZINSKI: I think the latest Clinton ad is really strong. It tweaks on every level. All of his weakness. And it’s scary. That little [makes whooshing sound] of the fighter jet sound at the end?

JOE: Yeah, when he says we’re going to bomb the hell out of them.

MIKA: Something you want to think about before you vote.

Most of the people I know are firmly in favor of creating glass parking lots, especially in the mid-east.

Oooooh. Nice, shiny, smooth parking lot – as far as the eye can see. And only slightly radioactive! Give it a few years, it’ll be OK.

at the same time as…

If that don’t give you “cognitive dissonance”, you ain’t got no “cognitive”…

Apparently, you can’t be stopped from making a fool out of yourself either.

Keep it up. Your credibility is about on par with Hillary’s at this point.

1a. how is it that I’m making a fool of myself by pointing out that Donelle T-wamp is AGAIN punching the Tar Baby, after being advised by everyone (including Rush Limbaugh) that he cannot fight the media? Who’s the fool? Fool.

1b. is what poor Conway said is true, given the quotes I include in my link…or ANY acquaintance with reality?

2. point to ANY lie I’ve told. I kind of think my creds are at least as good as yours, liar.

Hey, I just up voted Rags because I enjoy watching him make a fool of himself.

BTW, I am glad Cruz followed what the media wanted him to do. Look where he is today.

Never though I could get so many laughs out of a single thread until I started looking at Rag posts.

Keep up the humor for me.

Same questions to you, alt-righter.

I am already scared.

So, yes.
I am all in favor of telling our enemies to go [bleep] themselves.

Teddy Roosevelt spoke like that, and he was much admired. Yes, America is not what it was if its people desire any leader who does not put America first.

Too bad Trump is no Teddy Roosevelt. Superficially, Teddy actually fought in a war and actually held elective office. On a more fundamental level, Teddy had integrity to a fault. Lastly, it Teddy showed up today, you guys would hate him. He was a progressive.

Indeed, TR was a Progressive, as was Wilson, FDR, Truman, Nixon, etc.

Several of the most dangerous POTUS ever. And, yes, conservatives loath Progressives as the natural enemies of the ideals of the Revolution and Founding.

Because that’s what you are.

I see from the scroll-caption on the top photo that MSNBC fell for the latest celebrity death hoax (http://en.mediamass.net/people/frank-ocean/deathhoax.html).

AD: Because all it takes is one wrong move.

That quote is EVERGREEN, and it can be used for SOOOOOOOOooooooo much!

Yep, show a clip of her famous “3am Call” ad she ran against Obama, then say “She had her chance, she got her 3am Call”… then cut to Benghazi footage. Then show her tottering around with her Ray Charles glasses on, and being helped up the stairs, then showing her with her head spinning around like she’s having a stroke… and THEN cut to the “What difference, at this point, does it make” clip.

Not a bad plan … there’s so much golden material available, it’s hard to choose.

Hell, think yuuuuugge … use it all!

“Then show her tottering around with her Ray Charles glasses on, and being helped up the stairs, then showing her with her head spinning around like she’s having a stroke… ”

Yes, because mocking peoples’ physical frailties has worked out so well before for him.
::rollseyes::

Looks like Mika is giving us her best Bill Clinton face :-0

Gee, Mika says what? So awesome that LI is the go to echo chamber for whatever the blonde bobblehead spews each morning. Not.

Merlin, you describe LI as an “echo chamber” for MSNBC. That would imply that we approvingly parrot what is said there. But let’s take this item: far from approving what Mika and MSNBC said, we disapproved and indeed mocked it.

And the thrust of the article is not Mika’s reaction, though it was amusing. It is to bring to the attention of LI readers Hillary’s latest ad. And we suggest that the effect of the ad might be precisely that opposite of what the Clinton campaign would hope.

On a more general note, you’re right that I often blog on the doings at Morning Joe. Although its ratings are not as strong as Fox News’ at that hour, Morning Joe is viewed by many opinion leaders. And it does have the virtue, thanks to its three-hour length, of permitting guests to express themselves at length rather than in soundbites.

I find the show frequently interesting, if often infuriating and hope that LI readers will enjoy my reports. At the very least, I hope that readers will feel that it is useful to know what the opposition is thinking and saying. You might say that we go behind enemy lines to report back. We watch so you don’t have to, so to speak!

I’m going to, once again, say thank you for covering what is being said on MSNBC, Mr. Finkelstein. Although I really (really, REALLY) don’t want to have to watch them, I do want to know what they are saying, since many on the left listen to them. Especially since their numbers are apparently up quite a bit recently.

I have been forced to read US Today and watched the various news stations and they are all telling the same false stories. Additionally, I get a good does of NPR. Talk about getting rattled. I never knew how bad it is out there in lefty world. The stuff that Dan Rather would have gotten nail for back in 2000 is fair game today. Too bad Little Green Footballs can’t deliver like they did 2000.

Just to be sure, I checkout Huffy Post and if I really want to get my shorts in a bundle, I listen to Progressive Talk and Special Ed. Also knew that LI could not go more than a couple of days without a Moron Joe thread.

We are living in an interesting time and I sure hope Trump can break the Jacobin trend that I am seeing everywhere including here.

IF there’s any “Jacobin trend”, it exists on the part of you T-rump sucking alt-righters.

We conservatives are the heirs of the AMERICAN Revolution, not your counter-revolution.

I love it. Rags claims credit for the “American Revolution”. BTW, which party are you supporting there, the Jeffersonian Republican Democrats (aka Jacobin trending) or the Hamilton Federalist?

We conservatives are the heirs of the AMERICAN Revolution, not your counter-revolution.

Nice try, but you don’t own the conservative movement and if anything, you team blew it and allowed Trump to get it. Time for you to pay the piper instead of blaming everyone else.

“Supporting conservative globalist is Jacobin, which sounds just like Rags.”

Well, I’d just say that was a lie, and you were a liar, but I have no idea what you mean by “globalist”. I suspect you don’t either. I can never get any of you alt-right phucs to define it.

Well, I’d just say that was a lie, and you were a liar, but I have no idea what you mean by “globalist”.

Gee, Rags, google you fake name and globalist and maybe you can figure it out. I guess you never use the word.

A turn Jacobin, so focused on his cause that he fails to see the big picture.

Yep. In addition to being a chickenshit, that’s a lie, and you’re a liar.

Just another snowflake having a melt down.

This ad will only play to Clinton’s base. The die hard anti-war crowd, which would never vote for Trump anyways. Heck, they may not vote for Clinton either with her own record.

What do readers think? Another epic Hillary fail.

The more thoughtful ones also don’t want an arrogant President.

Unfortunately, “business as usual” politics, as managed by the two major parties, gave us Obama … who is both. In spades. (This isn’t a college paper, I can still say that—right? For now, anyway.)

“One wrong move”!? Whatever putz at the ad agency came up with that one is way overpaid.

On a more practical note, I think we’re all beginning to suspect that Madame President will be in a medically-induced coma no more than a month after inauguration day. She won’t be making the wrong move—she won’t be making any moves at all.

“In spades” I assume you can say it, but less and less are care. Last I checked, Obama’s approval rating is north of 50%.

Acutely phobic. Something notably missing when Obama and his heir apparent, Clinton, dream of progressing the status quo.

Because bombing the heck out of Libya was the right move, I am supposed to worry about one wrong move from Donald Trump.

Meh … It will work on the already persuaded … Not sure that it works on someone paying attention to Donald saying he wants less military interventions abroad.

Hillary is gonna miss with this one I think.

Mika and Scarborough, a real pair of rocket scientists there.

Our “media” seems to be populated by full blown idiots.

I didn’t see Mika’s jet impression, but coming at you a jet engine sucks and going away it blows. Did she get the sucking and blowing correct?

You’ll have to ask Scarborough. I hear he knows the answer.

That wasn’t a jet, Mika.

That was reality going “whoosh!” right over your head.

I like the picture, Mika. Good re-enactment of how you keep your job.