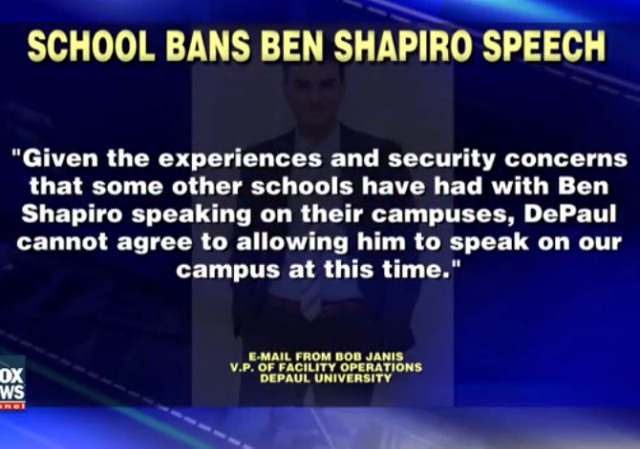 DePaul University’s banning of Ben Shapiro is an admission of failure on their part.

And punish those who disagree with us.

Damn shame that Megyn Kelly and Ben Shapiro don’t have any careers anymore, since offending the Great God Cheeto…

Oh, I understand that many of you down-thumbing idiots have the ass-burn over the fact that your predictions were so risibly stupid.

The resistance by campus leftists – usually including faculty members – to allowing conservative speech goes back at least to the ’80s, when former UN Ambassador Jeane Kirkpatrick had to cancel a lecture at Berkeley, I believe.

Since Russell Kirk, Buckley, Milton Friedman, etc, there has been little serious argument from the left. They have instead chosen to label conservative ideas as dangerous, radical, subversive, racist, and intolerable to avoid engaging in debate. It is the refuge of totalitarians.

Fascist jackboots’ veto power. Allow Leftists’ thuggish threats, intimidation, vitriol, histrionics and agitation to create a climate of fear and disruption in which dissenting views cannot be spoken or contemplated.

Good training for these reprobates to become future college professors, members of the federal government bureaucracy, propagandists in mainstream media, or, members of the Dumb-o-crat National Committee.