Yesterday in Rio, 19-year-old Ginny Thrasher won the USA’s first gold medal in the 2016 Olympics; she won the women’s 10-meter air rifle finals to the excitement and pride of every American.  Well, almost every American, the backlash from the left runs the gambit from droll to downright nasty and mean-spirited.

Ginny is a college student from Virginia who first shot a rifle while hunting with her grandfather, joined her high school rifle team, and was subsequently inspired by the 2012 Olympic shooting events to go for the gold herself.  Ginny’s performance on Saturday morning was nothing short of outstanding and is being called an “upset” in that she out-shot a two-time Olympic gold medal winner.

Thrasher . . . was one of eight competitors to emerge from the 50-woman qualification round Saturday morning.

She began her finals bid with a stunning bull’s-eye that yielded a perfect score of 10.9, eventually outlasting Serbia’s top-ranked Andrea Arsovic and China’s defending Olympic champion Siling Yi. Not that the 10.9 score gave her an extra jolt of confidence.

“I thought, ‘Oh no. It is very hard to come back from a 10.9,’ ” Thrasher said at a news conference shortly after the competition.

. . . . The final duel came down to Thrasher and Li Du, China’s 34-year-old who won gold medals in the 2004 and 2008 Olympics. Thrasher, well, thrashed her veteran opponent by a full point, a wide margin in perhaps the Games’ most precise sport. 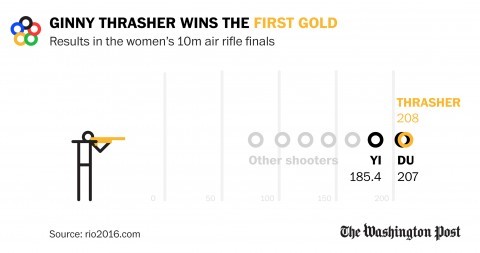 Her performance also “set a record of 208.0 at the air rifle event,” and she also set a record as the youngest woman to win the first gold medal of the Olympics.

Upon winning the gold medal, Ginny’s humility and grace were evident:  “This is very special for me. For me to start out Rio 2016 with a gold medal for the U.S.A. makes me incredibly proud,” Thrasher said. “I’m happy to positively represent my country.”

US goes into #Rio w/ 976 gold medals-more than next 3 countries combined. What an exceptional nation. Congrats to @TeamUSA’s Ginny Thrasher!

American women know how to handle their weapons.

While the majority of Americans appear to feel just as thrilled with her win for America as Ginny herself, there has been a surprising amount of venom spewed by those on the left.  Well, maybe “surprising” isn’t the right word.

Only American liberals would complain about winning a gold medal in the Rio Olympics. Congrats to Ginny Thrasher! #ignorethebums #USAgold

There is so much irony in the fact that the first #Olympics2016 #USAGold was in shooting. #RioOlympics2016

We really are two countries. Two countries that need a divorce before the animosity becomes fatal.

Trouble is that the liberals need to tax the conservatives to stay solvent.

Yes, a rife IS a gun, and anyone that sprains their uterus harping about it should be ignored (most especially is they claim to be a Marine!)

S/Sgt Hedrick was very clear about that. He said, “This is my rifle, this is my gun. My rifle is for killing and my gun is for fun.”

More importantly, well done young lady. I am very proud of you.

Down voting my DI’s wisdom is just rude. LOL!! If you must judge his wisdom at least do it in the context of MCRD 1966. S/F

Screw the trolls. Let them play with their guns.

Huh? An asterisked note is “harping”? My uterus will be shocked to hear that.

Tomatoes are fruits but are called vegetables when cooking.

Rhubarb is a vegetable but is often called a fruit because it’s used in desserts.

A rose in a wheat field is a weed.

… and cannons artillery. And they’re all guns.

She isn’t the only American who can shoot accurately. So remember THAT, invaders!

We need to collectively complain every time a medal is won in dihydrogen monoxide. As we all know, dihydrogen monoxide kills millions every year. So, any swimming, diving, boating medals all need to get booed for glorifying such a dangerous weapon as…water.

It’s true. Men and women are equal and complementary.

Liberals will only praise a woman when she stays on her assigned reservation and speaks and acts in alignment to the assigned narrative. If she dares to think or act like a free adult, she must be attacked.

Several of Alinsky’s rules are in play with these leftist criticisms.

Proud, for a moment, to be American.

Think I read her first shot with her grampa was a killing shot on a deer.
As a hunting safety instructor I’m not surprised at her accuracy as the girls listen better to shooting instructions when we do live firing.

I can confirm that. Women make the best firearms students. They listen to what you tell them, do what you ask them to and will thank you for the help afterwards.

Not every man is a poor student. But lordy, there are more of them out there.