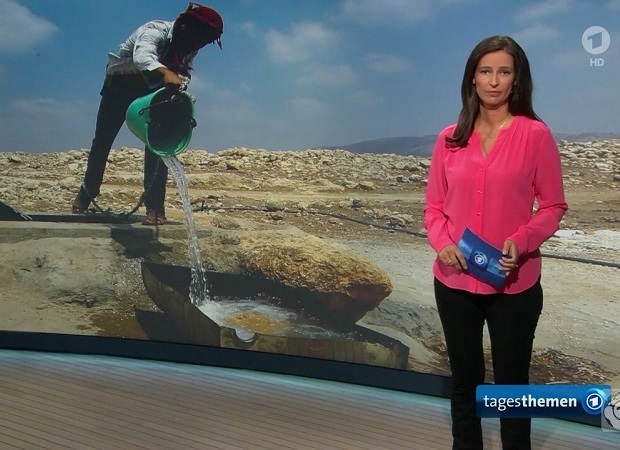 As a casual observer of German and European media, regular display of anti-Israel bias doesn’t surprise me anymore. But the report aired Sunday by Germany’s state-run broadcaster Tagesschau (ARD) during prime time was disturbingly biased — even by usual European standards. A video report titled “Dry Faucets in West Bank” was broadcasted on Germany’s most watched news show. The video clip accused Israel of ‘rationing the water supply’ of the Palestinian and diverting water resources to the neighbouring ‘Israeli settlements’.

The report narrated by ARD’s Israel correspondent Markus Rosch talks to a resident of a small Arab town of Salfit, who says, “We need water to live. Now there isn’t any. How can this go on like this?” The camera then switches to his little daughter who says she can’t go the holiday camps anymore due to water scarcity.

The story would be heartbreakingly tragic; if only it were true.

To check the facts, correspondent Markus Rosch doesn’t feel the need to consult any Israeli official or expert. He instead goes to Clemens Messerschmid, a German hydrologist based in the region. Messerschmidt is quick to blames this ‘water scarcity’ on — no prizes for guessing this one rights — the ‘Occupation’.

According German media watchdog Honestly Concerned, Messerschmid is the same genius scientist who in 2014 accused Israel of flooding Gaza by opening the gates of its dams that were built for the sole purpose of flooding Gaza. Not just Arab media, but even some reputed Western media outlets ran wild with the story of apocalyptic ‘Gaza Floods’. Later Al Jazeera and other news outlets were forced to retract their articles after the story was exposed as hoax.

[ARD’s correspondent] Rosch fails to disclose that Israel is pumping around 30 percent more water in the Palestinian region than agreed in the Oslo Accord. (…) While 90 percent of waste water in Israel is treated and redirected to agriculture through separate pipes, Palestinians have refused to take cheap treated water for irrigation, saying, “We don’t want your sh*t.” This way Palestinian farmers waste the precious drinking water in traditional wasteful methods on their vegetables in the fields. [Author’s translation]

Water libel against Israel isn’t something new. In 2014, German politician and President of the EU parliament Martin Schulz, while addressing the Israeli Knesset, accused Israel of deliberately supplying less water to the Palestinians.

In June 2016, Miriam Elman wrote an informative article here at Legal Insurrection debunking the media hoax about alleged water-cut by Israel during the Muslim holy month of Ramadan. Along with Qatar-based Al Jazeera, mainstream media outlets like UK’s Independent and International Business Times covered this hoax as a genuine news story.

Despite public complaints, German broadcaster ARD has issued a statement defending its Sunday’s coverage. According to the statement, ARD could not find anyone from Israeli side due to an unspecified “Jewish festival”. The channel also defended the credentials of German expert Clemens Messerschmid; describing him as a long-time advisor for various German and international organisations.

One step back, three steps closer to becoming an Islamic state. I will miss the unique German and most European cultures that will go extinct soon.

With luck, it will happen soon, and with immediate obvious and horrendous results so that it may serves as an example to others (meaning our blinkered fellow citizens).

I thought there was a new law in Germany against inciting hatred? Or does that only protect Muslims?

Protects non-Judeao-Christians, who are the only groups any one is allowed to be prejudiced against.

Except that logic doesn’t work in this case, because antisemitism isn’t reasonable. That’s the problem with talking about “racism” instead of “antisemitism”. They aren’t the same thing. There is something different about Jews, and it’s no good pretending otherwise just because it doesn’t fit into the enlightenment mindset. Antisemitism just doesn’t work the same way as racism, so it’s no good treating the former as if it were just an instance of the latter.

Good points. I think there is a common necessary element for racism and antisemitism: One must dehumanize individuals by placing them into groups. Those groups then become their primary identity. This leads to several principles:
a) Members of a group are interchangeable. Individual characteristics are irrelevant.
b) One can then assign characteristics to the group
c) One can blame the abstract group for one’s own problems (Author Eric Hoffer stated that all movements need an enemy)

The drivers of racism and antisemitism are different but they share some common irrational and destructive characteristics. Personally, I have never understood or accepted either. I think part of that is I have always seen people as individuals first, not as dehumanized members of groups or classes or whatever.

Racism and antisemitism are different as you say but the difference is in the small minds that hold those attitudes. The targets are simply convenient ways of avoiding a mirror.

I think this ignorant mindset is based on the philosophy of Marx that is so widely embraced by the idiots of the world.

I suppose that 80 years really isn’t that long in the scheme of things.

Proof that most Germans have not learned anything in over 60 years. German jews lived among them for a thousand years, were fully integrated and never a crime problem but were still hated and reviled yet now they welcome muslims that are for the most part semitic as well and loaded with hate and primed for violence against all Germans

Well, Sunday was Tish`a B’av. Which does count, technically, as a “festival”. And it may indeed have been hard to find an Israeli spokesman. But the need for such a spokesman is not for “balance”, it’s for finding out the facts, so if you can’t find anyone to tell you the facts you run with garbage instead, from a thoroughly discredited source?! And if this thoroughly discredited source is “a long-time advisor for various German and international organisations”, isn’t that something you should report as a problem, rather than reporting his lies as if they had some truth value?