The magazine published naked pictures of Muslims on their latest cover. 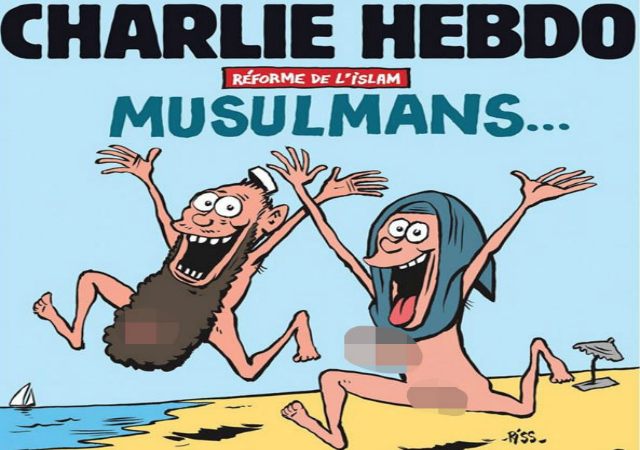 French police and prosecutors have opened an investigation into new threats French satirical magazine Charlie Hebdo over images of naked Muslims they published.

The threats come over a year two gunmen slaughtered eleven people at Charlie Hebdo over “offensive” images of Mohammad. They also killed a security guard outside of the building.

It depicted two Muslims, a male and a female, running naked on the sand with the caption ‘The reform of Islam: Muslims loosen up’. It was a comment on the fact that burkas have been banned from the beaches in Cannes in the wake of the Nice terrorist attack.

The issue was published last Wednesday and the threat made via the magazine’s Facebook page.

The publication immediately contacted the police:

Eric Portheault, the co-owner of the newspaper, told Le Parisien: “We have filed a complaint with the police of the 13th arrondissement of the Paris police over the threats.

The prosecutors also said the magazine received “around a dozen ‘written death threats'” in July and August on Facebook.

Police have protected the magazine since the terrorist attack in January 2015, especially since they continue to receive threats:

In April the magazine was branded ‘bigoted and racist’ after it stated that the fear of being labelled Islamophobic is ‘aiding terrorists’.

An editorial column called ‘How Did We End Up Here?’ suggested that terror attacks, such as recent ones in Brussels and Paris, happened due to direct and indirect contribution from all Muslims.

[Featured image via The Daily Star]

Mockery is the sharpest tool. Particularly with Muslims because they are so bothered by it.

It’s probably not a coincidence that the Left has fast forwarded the refugee crises in the wake of progressive wars and social justice adventurism.

That said, Islam acquires its authoritarian character through marriage with left-wing ideology.

I can just imagine the screeching and braying we can expect from the Pro-Choice Church, Party, and “Charlie” when images and videos demonstrating their rites and privileges are revealed outside the privacy of chambers.

Oh, that’s right. It came, it passed, their god-like. Pass the opiates with “benefits” a la mode.

Wow that blurred spot on the beard is a hilarious touch.